Dan Trachtenberg’s directorial debut 10 Cloverfield Lane began life as a psychological thriller called The Cellar before being repurposed by JJ Abrams’ Bad Robot production company and Whiplash writer/director Damien Chazelle as a ‘blood relative’ to Matt Reeves’ 2008 alien monster movie Cloverfield. It’s because of the tenuous links to Cloverfield that this promising film is ultimately only two thirds of a great movie.

The film’s opening sequence pulls you directly into its world in startling fashion; this may be Trachtenberg’s debut feature but he’s not short on confidence. The film opens on Michelle (Mary Elizabeth Winstead) driving into the night after an argument with her fiancé Ben. She’s distracted by a phone call and boom, her car crashes and after a few shifts from the horrific sounds of the crash to complete silence, the screen smashes to black and the titles hit.

From that moment on, the film is a tense, taut thriller as Michelle wakes up in a dank bedroom, chained to a pipe with an IV drip in her arm. As she comes to discover, she was rescued from the crash by Howard (John Goodman), a survivalist who has built a bunker under his farm house and claims the outside world has been destroyed by some kind of disaster, possibly chemical, nuclear or alien. Howard claims to have saved Michelle’s life but naturally she’s suspicious of this man who has her chained up in a bunker. The film keeps you guessing with the Howard character: is he right about the outside world or is he just crazy?

Though the title itself is a spoiler and robs the film of some of that tension, these scenes in the bunker are fantastically tense. Howard’s intentions and motivations are drip fed throughout the film and our view of him continually changes along with Michelle’s, who must constantly assess whether she’s safer in the bunker with a possible madman or making a break for the outside world where, if he’s right, she could meet an instant and horrifying death.

Refreshingly, Michelle is a well-written and fantastically well-acted character who does the logical thing in every situation in the bunker. With the information she has at any given time, she makes the right choices and is a much more substantial character than the typical woman-in-peril found in thrillers and horror movies. The script divulges enough about her life outside the bunker to feed into how she behaves around Howard and the way she eventually slots into what is essentially an abusive relationship with him. There are times when Howard is controlling and jealous, demanding gratitude while trying to convince Michelle that he is her only hope for safety. By continually reaffirming the notion that her family and friends have all been killed in whatever has hit the outside world, he isolates her and breaks her down.

The only relief in the bunker is the film’s only other real character, Emmett (John Gallagher Jr), a former marine who helped Howard build the bunker in the first place. As he tells it, when the outside world began to crumble, he made a beeline for Howard’s bunker and forced his way in. Emmett’s a chipper guy and brings some humour and levity to the scenario while providing a sounding board for Michelle. He isn’t as well-rounded a character as Michelle or Howard but he is invaluable, giving Michelle the opportunity to divulge details about her past as well as more pressing concerns around life with Howard.

In this first hour or so, the script is impressively tight, with every piece of information and every object – essentially everything we see – proving to be some kind of setup for something that will happen later. It’s a wonderfully contained and claustrophobic chamber piece that, despite a couple of plot contrivances, is masterfully handled and brilliantly acted, particularly by Winstead. This may be the star making turn she’s been threatening to produce for years now. Then, sadly, the franchise machine whirs into action and it all comes tumbling down.

The fact that Cloverfield is mentioned in the title gives some indication as to how the final scenes of this movie play out but the massive shift in tone and genre is no less poorly handled and ultimately disappointing. The transition from the film of the first couple of acts to the movie of the last act is actually well handled and isn’t immediately jarring. But gradually, the character work that’s been done is lost in a series of action scenes that are devoid of any physical logic and Michelle’s character rapidly turns into a cynical, wise-cracking badass. The film strains for iconic imagery and tries to suddenly create a new action hero which is at odds with the logical, grounded work that came before. The final scene is implausible to the point of being laughable.

It’s unfair to review a film for what it isn’t so there’s no point in pining for a version of 10 Cloverfield Lane that wasn’t tied to the Cloverfield brand but it’s hard not to feel the impact that decision had on this often excellently crafted, always brilliantly acted but ultimately uneven film. 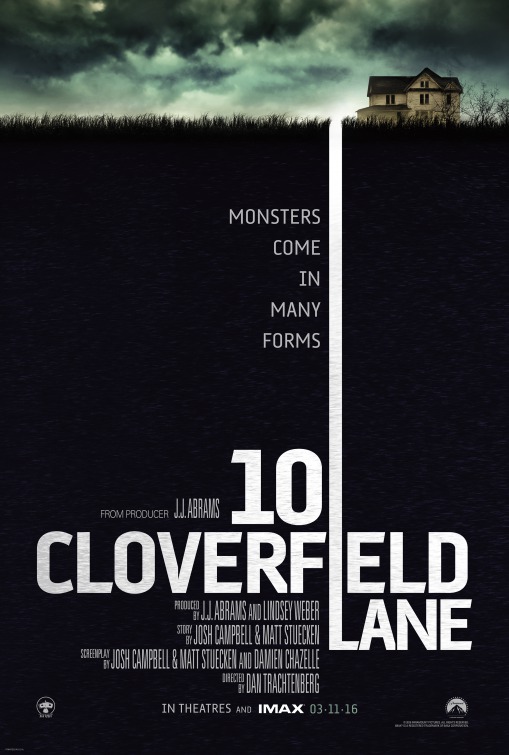