Is there anything Phil Lord and Chris Miller can’t do? After turning in great movies based on food-based precipitation, plastic bricks and a cheesy 80’s cop show, the directing duo return with 22 Jump Street, a sequel which manages to have its cake and eat it too.

After going undercover in a high school in 21 Jump Street, bumbling cops Schmidt (Jonah Hill) and Jenko (Channing Tatum) are now being sent to college, assuming their undercover personas again and once again trying to infiltrate the dealer and find the supplier of a dangerous new drug that’s sweeping the campus and has already killed one student. Sound familiar? It should, it’s pretty much the exact plot of the first film and the script knows it. In the same way the first film referenced questionable reboots of old properties, this sequel pokes fun at pointless sequels that rehash the same plot, only with a bigger budget.

The self-referential script – by Michael Bacall, Oren Uziel and Rodney Rothman – is jam-packed with so many winking in-jokes and self-aware gags that it might give Arrested Development a run for its meta-money. Instead of lazily retreading the same plot and the same jokes like lesser comedies would (hello, Hangover Part II…), 22 Jump Street commits so fully to its formula while poking fun at itself so much that its impossible not to love the appealing silliness of it all.

Hill and Tatum are on winning form once again, a loveable and hilarious double-act that compliment each other perfectly. Hill’s Schmidt is still a sensitive neurotic and Tatum’s Jenko a lumbering meathead but the passion in their opposites-attract relationship may be starting to wane.

Once in college, Schmidt falls in with the arty crowd, starting a sweet relationship with Maya (Amber Stevens), a beautiful student who used to live across the hall from the deceased. He also meets her creepy roommate Mercedes, played in scene-stealing, deadpan fashion by Jillian Bell. Jenko meanwhile makes his way onto the football team, making fast friends with star quarterback Zuke (Wyatt Russell, son of Kurt), a friendship that starts to damage his relationship with Schmidt. “Maybe it’s time we investigate new people. Sow our cop oats”, suggests Jenko in an awkwardly funny hetero-break-up scene.

While the final third starts to slow a little as it approaches its action climax, the first two thirds of the film are massively enjoyable, mixing cheeky in-jokes, pratfalls, throwaway one-liners and barely noticeable sight gags – look out for a Benny Hill reference during a chase scene – in a non-stop flurry of gags, coming from all angles. Hill and Tatum hoover up most of the laughs but the eclectic supporting cast deliver, especially the oddball stoners across the hall, played by twins The Lucas Brothers, whose synchronised speech is both bizarre and hilarious.

The prospects of a 23 Jump Street are well and truly obliterated by an end credits sequence that takes every possible idea for another sequel and tears them to shreds. If this is to be the last visit to Jump Street, Lord and Miller have left behind a fantastic duo of deliriously daft meta comedy treats. 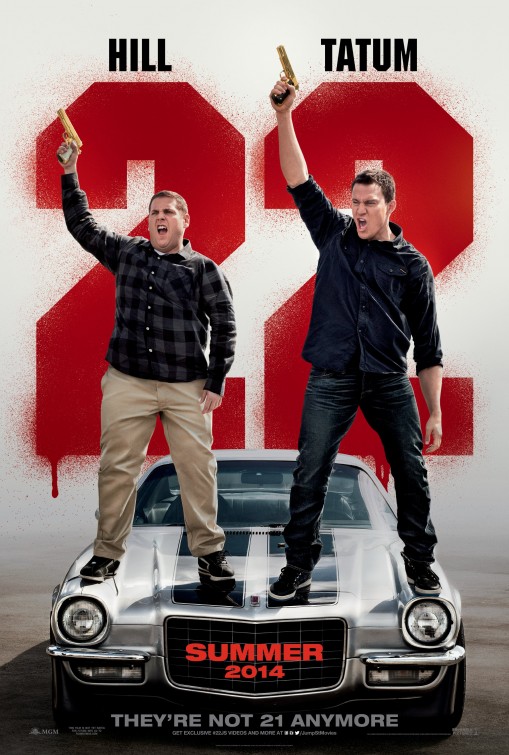