When Dwayne (McBride) and Travis (Swardson) need $100,000 to pay off a hitman to murder Dwayne’s millionaire father, they hatch a plan to strap a bomb to a hapless pizza boy (Eisenberg) and force him to rob a bank. With his best friend (Ansari) in tow, Nick embarks on a mission to rob the bank and save his own life.

In a time where Judd Apatow and his protégées are churning out movies that often clock in over the two hour mark, great as some of those movies are, it’s refreshing to find an adult comedy as tight as 30 Minutes or Less, the latest effort from Zombieland director Ruben Fleischer.

The film opens with pizza delivery guy Nick (Eisenberg), in one of the film’s better scenes, tearing through the streets in his old Mustang to make sure his pizzas arrive within the 30 minute deadline or else the customer gets them for free. Nick’s best friend and roommate Chet (Ansari) has just been given a full time teaching job. His twin sister Kate (Dilshad Valsaria), Nick’s long term crush, is moving to Atlanta for a big time hotel manager’s job, all a sharp contrast to Nick’s pot smoking, minimum wage existence.

While working late one night, Nick finds himself jumped by Dwayne (McBride) and Travis (Swardson), two would-be criminal masterminds who plan to force Nick to obtain $100,000 in order to pay a hitman to kill Dwayne’s millionaire marine father (Fred Ward) and get hold of the inheritance. Nick is given ten hours to get the money or a bomb strapped to his chest will be detonated. Teaming with Chet, armed with toy guns and using Point Break as a template, the pair embark on a mission to rob the local bank.

So begins a series of ridiculous and increasingly violent events as Nick and Chet attempt to fetch the cash and get it back to Dwayne. Fleischer dials back the madcap genre antics of Zombieland for a more straightforward style here, keeping the film moving at a clip at all times. The cast are solid with each one bringing a variation of their usual personas, with Eisenberg’s lazy stoner perhaps the biggest departure. Ansari and McBride, both impressing in supporting roles in big comedies and on TV in Parks & Recreation and Eastbound & Down respectively, bring the bigger laughs here. Ansari dials back his arrogant overconfidence but maintains the same jittery energy he brings to every part and McBride’s mullet-sporting dimwit is never short of a cock joke or two. Also on hand to ham it up and deliver a few laughs is Michael Pena’s lisping Mexican hitman Chango who finds himself involved in the film’s more violent and OTT moments.

The film moves rapidly from one ridiculous scenario to another, providing violent laughs and chaotic set pieces throughout, the tone similar to that of 2008’s Pineapple Express though without that film’s sluggish pace. 30 Minutes or Less is a quick, funny, if ultimately throwaway, late summer comedy with a good cast, big laughs and an appealing high concept that doesn’t overstay it’s welcome. 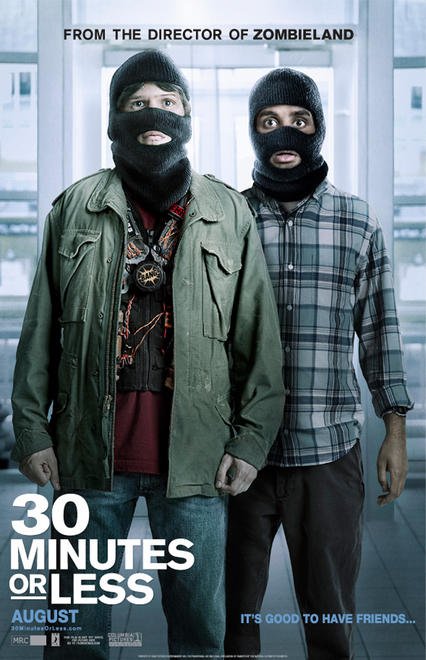