There aren’t many topics less likely to be the basis of a successful comedy than cancer. To perform this feat successfully requires a light touch as making the film too serious will dampen the laughs, make it too funny and it won’t seem real. Writer Will Reiser and real life friend Seth Rogen, actor and producer here, are better placed than most to bring the right touch to this material given that it’s based loosely on Reiser’s own fight with cancer at the age of 25. The film, directed by Jonathan Levine (The Wackness), mostly succeeds as an effective sitcom with the touching undercurrent of harsh reality that comes with cancer.

Reiser’s on screen counterpart is 27 year old Adam (Joseph Gordon Levitt), who works with his best bud Kyle (Rogen) and is set to move in with his gorgeous girlfriend Rachael (Bryce Dallas Howard). After experiencing a lot of back pain, Adam goes to his doctor and a few tests reveals he has an extremely rare cancer of the spine. Adam is astounded, “That doesn’t make any sense though…I don’t drink, I don’t smoke, I recycle…”

The characters here are well written and well acted, each one relatable in their own way as they attempt to help Adam cope with his illness while also coping with the possibility that their friend/son/boyfriend might die. This is key when the film, and Adam’s illness, begins to get more serious in the third act. Rogen brings his patented easy going laughs and, while hardly a stretch for him, his Kyle seems like a real person and deals with Adam’s disease the way you expect a best friend would in such a situation. Angelica Huston also finds the perfect note as Adam’s mother, struggling enough as it is to handle her husband, an Alzheimer’s sufferer. She’s overbearing and her worrying annoys Adam but she’s just desperate to be kept in the loop, as any mother would be in such a situation.

The only character that isn’t likeable is Bryce Dallas Howard’s Rachael, as she agrees to stand by Adam during this ordeal but her support starts to wane as soon as things get hard. It’s a shame to see an actress as lovely as Howard cast in another bitch role (after this year’s The Help), but her work here is invaluable as she paves the way for the inevitable romance between Adam and his inexperienced grief counsellor Katherine (Anna Kendrick) to slowly blossom. Kendrick is an immensely likeable actress and brings a lot of awkward charm here.

It’s a testament to the ability of these actors and how well Reiser has written their characters that we are willing to forgive him for his missteps with the plot and just generally how predictable the film is. It’s not hard to see within the first act of the film how everything is going to play out, that Rachael will run off, that one of Adam’s loveable chemo friends (Phillip Baker Hall and Matt Frewer) probably won’t make it to the movie’s end, that Adam and Katherine will begin to fall for each other.

Despite its shortcomings, 50/50 is still a sweet, enjoyable film, packed with heart that’s offset well by some genuine laughs. Crucially, the film manages to hold it together throughout a strong third act, where many comedies tend to descend into madness, reaching a satisfying conclusion that just about avoids the obvious, syrupy sentiment. 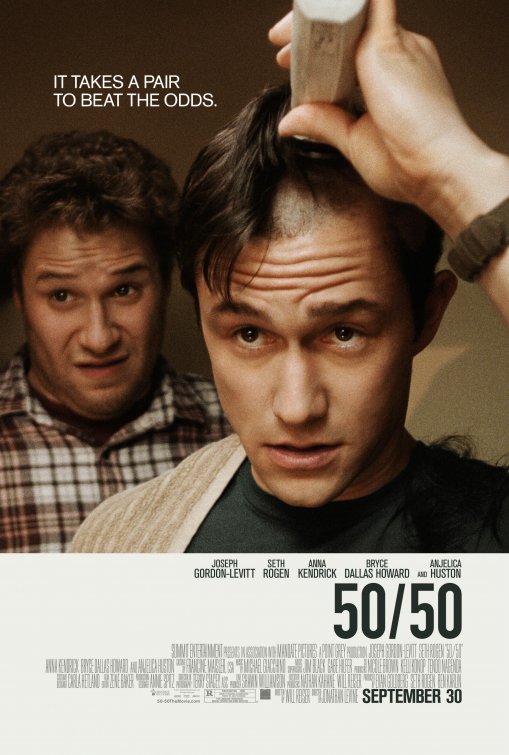