When most people look at a house, they see a home, a place full of memories for the families who have lived there before and possibilities for those who might in the future. To Rick Carver, the sociopathic real estate agent at the centre of Ramin Bahrani’s searing drama 99 Homes, that house is just a box, and one he can make a lot of money from.

Carver, played by Michael Shannon, repossesses homes from residents who can’t afford the repayments and sells them on to investors. He goes door to door, puffing on an e-cigarette and shouting into his smart phone, telling families their home has been repossessed and they have only a few minutes to gather up some belongings and get out before he sends in contractors to clear the place. The film opens on one such sequence as Dennis Nash (Andrew Garfield) is evicted from the home he grew up in and currently lives in with his son Connor (Noah Lomax) and mother Lynn (Laura Dern).

Bahrani excellently captures the horror and confusion of this situation as Dennis shifts from pleading and bargaining to anger and eventually shame as he watches his family and their possessions dumped in the street in front of their neighbours. It’s a powerful note to open the film on, plunging us right in at the harsh end of Carver’s profession and though he feigns some kind of feeling for the families he’s evicting, he ultimately feels nothing for them; as far as he’s concerned, these people borrowed more than they could afford and are paying for it now.

Dennis, a construction worker struggling to find work in a bad economy, is forced to cram his family into a tiny room in a motel full of similar families. A visit to Carver’s office and an altercation with one of his lackeys later and suddenly Dennis is making decent cash doing odd jobs around Carver’s repossessed properties. It doesn’t sit well with Dennis but it’s just some construction work, what’s the big deal? Well it quickly escalates and before long, it’s Dennis doing the rounds and evicting people from their homes, the money and the opportunity to support his family again proving far too much to resist.

Dennis’ battle with his conscious is the central arc of the film, playing out like a real estate spin on Wall Street as he is seduced by Carver’s imposing charisma. Bahrani’s leads are perfectly cast here: Garfield, a sensitive and emotionally expressive actor finds real depths of desperation, guilt and inner conflict as a man trying to support his family but struggling with the toll it takes on his conscious. Shannon meanwhile is a force of nature, playing Carver as a callous vulture who has found a way to make a boat load of cash and is ruthless enough to not give a damn about anyone who loses out in the process.

But as evil as Carver seems to be, he’s quick to point out that he’s just one cog of a much larger machine; one man taking advantage of a rigged system that bails out bankers and rewards real estate lizards like Carver while punishing average families who just need somewhere to live. Bahrani’s films have previously been quiet, small-scale films with largely non-professional actors and he applies some of that clear-eyed style here but there’s a strong undercurrent of anger that drives the film forward. At the end of the film’s taut run time, Bahrani crafts a tense, gripping finale that largely steers clear of the kind of tragedy and sensationalism that a lesser film would have indulged in.

The performances alone would make 99 Homes worth watching but Bahrani and his co-writers Amir Naderi and Bahareh Azimi have crafted a fiercely intelligent story that makes the blood boil. 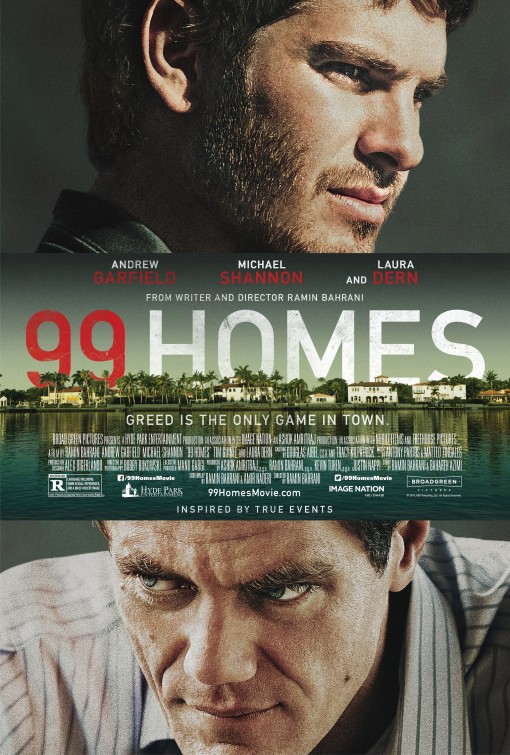