Adapted from Nick Hornby’s 2005 novel, A Long Way Down has a wonderfully morbid premise that catches the attention immediately: Four strangers meet atop an infamous London tower block on New Year’s Eve, each one with the intention of jumping off if not for the presence of the others.

In keeping with Hornby’s novel, each of the four gets their own voiceover and extended introductions. Firstly, there’s Martin Sharp (Pierce Brosnan), a disgraced breakfast TV presenter who lost his family and career over an affair with an underage girl. He’s joined on the roof by gawky single mother Maureen (Toni Collette), stroppy teenager Jess (Imogen Poots) and wannabe rocker J.J (Aaron Paul), who are struggling to deal with a disabled son, the loss of a loved one and career frustrations, respectively.

With their plans scuppered, the gang make a pact to not try to kill themselves until Valentine’s Day, giving them six weeks to turn their lives around. This pact forms the basis of the film as the four begin to form a close bond, particularly as the press gets hold of their story and begin relentlessly hounding them.

The set-up suggests a dark, gloomy comedy but in the hands of director Pascal Chaumeil, best known for Romain Duris-starring romcom Heartbreaker, this is a more upbeat and breezy affair than the subject matter would suggest. While it defies expectations in that respect, the tone proves a tricky thing for the French helmer to get to grips with and the light, chirpy feel is somewhat at odds with the issues facing the characters.

The comedy does give way to a little more misery in the second half as the realities of the characters’ lives are laid out in a little more detail; particularly Collette’s Maureen, whose relationship with her son leads to the film’s most moving scenes.

The muddled tone leaves the film feeling a little odd but the cast, themselves a fairly random collection of names, are all just about charming enough to ensure you’re invested in their plight, even if the film doesn’t seem to be. Brosnan convinces as an oily TV presenter despite a shaky accent, Poots gives a vibrant, energetic turn and Collette pretty much steals the show, though she does have the most to work with. Aaron Paul isn’t so fortunate, landed with the least developed character, but the Breaking Bad star does the best to sell his character’s inner turmoil.

So while the flighty comedy doesn’t sit entirely well next to the darker material, a winning cast and a moving third act pulls A Long Way Down through. Given the premise, it could have been a genuinely great film but on the flipside, it could have also gone horribly wrong. Chaumeil largely plays it safe, which at times comes across as glib when dealing with such important topics but also softens the edges of potentially tricky material, making this an easy watch, if not particularly memorable. 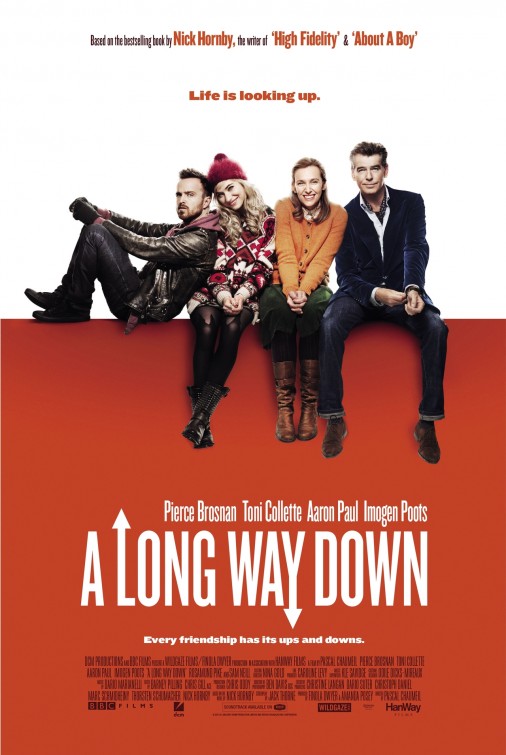