Though the trailer for A Simple Favor promises a glimpse at the ‘darker side’ of director Paul Feig, don’t go expecting a gritty, Gone Girl style thriller. The plot may share some similarities with David Fincher’s film but that’s where the comparisons end; this is a sharp and playful comedy thriller that plays to Feig’s strengths but also marks a step forward for the director.

After gifting plum lead roles to the likes of Kristen Wiig, Melissa McCarthy and Sandra Bullock in the past, Feig’s leading ladies this time around are Anna Kendrick and Blake Lively. Kendrick stars as Stephanie, a bright and peppy single mom who runs a lifestyle vlog from her kitchen, giving cooking and DIY lessons to a small audience of other moms. Her life is completely dedicated to her home, her vlog and her young son, but that all changes when she meets Emily (Lively), one of the other moms at school.

When their kids become friends, so do Stephanie and Emily, sharing stories and secrets over increasingly strong cocktails. Stephanie is taken in by Emily’s chic fashion sense, take-no-shit attitude and magazine-perfect lifestyle. Her house is a glass-fronted modernist mansion and her husband, Sean (Henry Golding), is a successful writer. But Emily is mysterious, detached; even her husband describes her as a beautiful ghost. When she goes missing one day, Stephanie is told that she does this and always turns up a few days later, but this time she doesn’t and Stephanie delves into Emily’s past to find out the truth about her disappearance.

Littered with snarky one-liners, immaculately tailored outfits and French pop tunes, it’s clear Feig is having a blast with this material. Adapted by Jessica Scharzer from Darcey Bell’s novel, the plot is a tangle of twists and turns that doesn’t always entirely hang together but is sly and funny enough to remain engaging throughout. Even as the film begins to come off the rails during a drawn out climax of increasingly batshit crazy events, there’s fun to be had in seeing just how ridiculous things are going to get.

Crucial to keeping it all afloat are Kendrick and Lively, who are both brilliantly cast and turn in pitch perfect performances. Kendrick has played similar characters in the past but has fun charting Stephanie’s arc from prissy try-hard to something darker and more layered. Lively has the smaller part but is a revelation, bringing all of her charm and charisma to bear in a sly, sexy and enigmatic turn that feels like a modern approximation of a Hitchcock blonde.

Though its plot is knotted and overwritten, A Simple Favor is a film determined to entertain at all costs and that determination is intoxicating. Feig surrounds his neo-noir plot in fun, frothy comedy and together it serves as a playful showcase for the excellent leading ladies at the film’s centre. 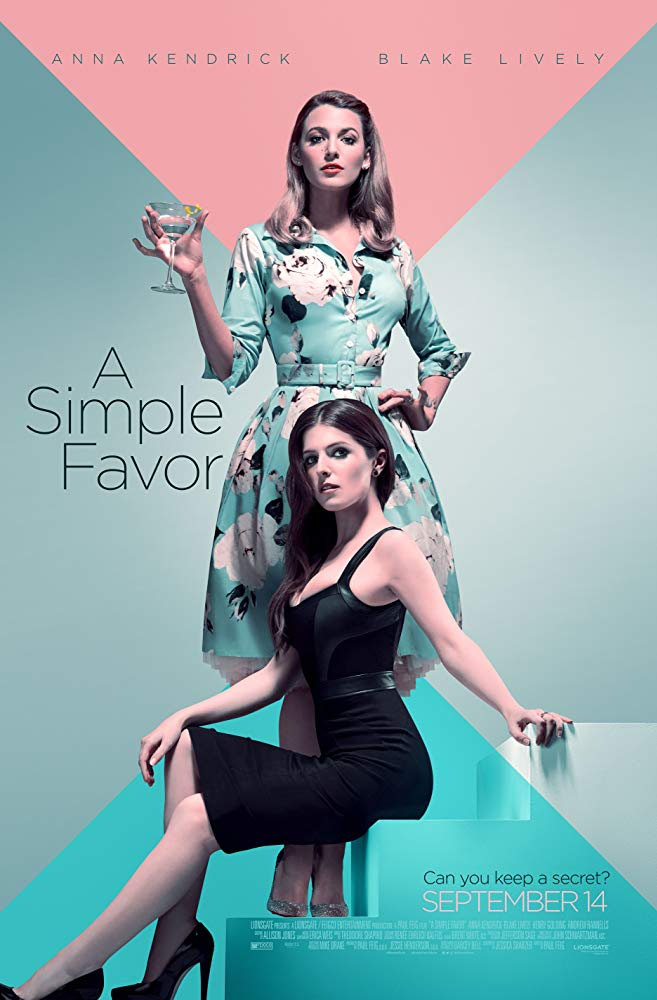