Inspired by a New York Times article about groups of youngsters travelling the US selling magazine subscriptions, Brit director Andrea Arnold decided that should be the basis of her first American film. With a cast largely populated by non-professionals and barely any plot, American Honey is a beautiful, sprawling mess of poverty, sex and copious amounts of trap music as its teenage heroine Star (Sasha Lane) leaves behind her hardscrabble life to go on the road with a “mag crew”.

The details of Star’s life are vague. She lives in poverty with two children who appear to be her siblings and a man who may or may not be her father but is definitely abusive. When charismatic magazine salesman Jake (Shia LaBeouf) – who she first meets dancing to Rihanna in a K-Mart – offers Star a job with his crew, it’s the perfect escape for her. She joins a group of other kids, all from similarly poor backgrounds, and takes off on a road trip across America’s Midwest, going door to door selling magazine subscriptions.

As far as plot goes, there isn’t much more to it. The film follows Star as she becomes a part of the group, forming bonds with the other kids, getting on the wrong side of their fierce boss Krystal (Riley Keough) and inevitably embarking on a passionate but ill-advised relationship with Jake. Lane is a complete novice, having been discovered by Arnold partying in Florida on Spring Break but her performance here is exceptional. She effortlessly shoulders the bulk of the film with a naturalistic and compelling performance as a girl who’s both wise beyond her years and frustratingly naïve, getting herself into situations that could end very badly. But Lane inspires so much empathy that even during her most reckless moments, we are completely invested in what happens to her.

At the centre of the film is Star’s relationship with Jake, which is ultimately too predictable but is nonetheless brilliantly played by Lane and LaBeouf. The sparks fly between the two as their volatile relationship veers between moments of tender romance, fervent sex and vicious arguments. LaBeouf might be better known for his perceived meltdowns and bizarre public stunts at the moment but he has repeatedly shown what a powerful actor he can be and this might be his best performance to date. He is both charming and seductive, always finding the right angle to sweet talk potential sales, but also unpredictable and violent.

Though Star is largely the focus, the film also works as a look at the fringes of American society, exploring the kinds of areas and meeting the kind of people who don’t make it onto the big screen all that often. Though Arnold’s style hews closer to Terence Malick in the slow, hazy nature shots and animal-based interludes – all beautifully shot in Academy ratio by Arnold regular Robbie Ryan – there’s also an air of Harmony Korine in the film’s depiction of vaguely aimless youths in a setting that’s equal parts trash and beauty. Certain touches are too on the nose, particularly the recurring use of Calvin Harris and Rihanna’s We Found Love – the chorus of which spells out one of the film’s main themes. But overall, Arnold’s depiction of this part of the world feels authentic and is presented with empathy, never mocking nor patronising the people or places involved.

With a run time that stretches to nearly three hours and very little thrust to the narrative, American Honey might sound like a slog but the opposite is true; the film’s power accumulates over the course of its loose, meandering run time. It is thrilling and engrossing, brimming with energy and life in a way that beautifully captures both the hope and hopelessness that’s present in the lives of these young people trying to find their way in a world that may not have a place for them. 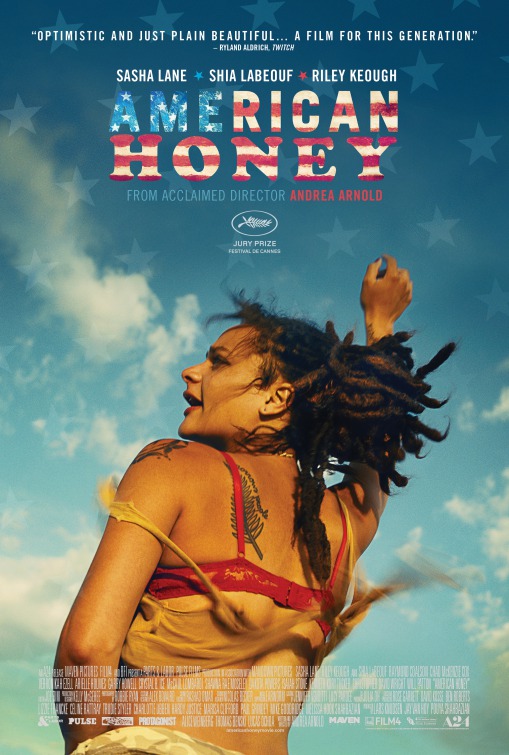