In his work as a screenwriter on the likes of Adaptation and Being John Malkovich and his directorial debut Synechdoche, New York, Charlie Kaufman has established himself as one of the most unique and extraordinary talents in film right now. His latest film, astonishing stop-motion animation Anomalisa, further enhances that reputation, telling the deceptively simple story of a middle-aged customer service guru and his existential crisis that is surprisingly – and horrifically – relatable.

Kaufman and co-director Duke Johnson tell this story using puppets that are slightly dumpier than real people but are eerily convincing. Other than a seam that connects the top and bottom sections of their faces to allow some wonderfully expressive animation, these puppets are incredibly lifelike and even anatomically correct. The central character – depressed writer and motivational speaker Michael Stone – with his greying hair and middle-age spread feels like a living, breathing person, albeit alonely, isolated misanthrope.

Voiced with an irascible English growl by David Thewlis, Michael plods through a life of nightmarish mundanity. We first meet him on his way to Cincinnati as part of the tour for his new customer service self-help manual ‘How Can I Help You Help Them?’. It’s no coincidence that the hotel he checks into is called The Fregoli – a reference to the Fregoli delusion, wherein someone believes everyone else is the same person. This is a major theme in the film as everyone Michael encounters, from the chatty cabby and the hotel concierge to his own wife and young son, have the same face and are all voiced by Tom Noonan. The tone of his voice shifts to fit the character but he never uses a different pitch or accent. His voice is pleasant but vaguely sinister and the effect is more than a little bit disturbing.

But a few hours into his stay in the Fregoli, Michael hears a voice that cuts through all of the monotony and gives him a sharp wake up call. The voice belongs to Lisa (Jennifer Jason Leigh), a frumpy Ohio customer service rep who’s in town to attend Michael’s talk. Michael takes Lisa and her friend Emily out for drinks and eventually asks Lisa back to his room for a nightcap. She’s surprised, everyone usually prefers Emily, but to Michael, Emily looks and sounds just like everyone else. Lisa is different and Michael is fixated on her voice, keeping her talking about all the details of her completely ordinary life just to hear her speak. In an odd, funny and ultimately very sweet scene, Michael convinces Lisa to sing to him and she gives him a quiet rendition of Girls Just Wanna Have Fun.

Eventually they sleep together, in a scene that’s funny to look at (it’s puppets having sex) but is ultimately one of the most human sex scenes you’re likely to see thanks to the awkwardness and clumsiness of it all. Kaufman throughout is successful in making these characters feel like real, flawed people, particularly Michael. As a miserable, narcissistic misanthrope, he’s a difficult character to like and Kaufman never forces you to. He just presents Michael – and Lisa – as flawed characters and lets you make up your own mind about them and their behaviour and through their brief, rollercoaster relationship he manages to encapsulate the fleeting excitement of a new relationship, how it can snap someone out of the banalities of life before quickly becoming banal itself.

All of Kaufman’s usual hallmarks are present in Anomalisa, from the acute insights into human behaviour to the odd moments of surreal humour that at times dip into horror. But the style of animation marks it out from the rest of his filmography, achieving a unique look through this wonderfully textured stop motion world. Kaufman may be dealing with similar concerns, but he’s doing it in a fresh and at times visually stunning way, telling a poignant and all too human story in a completely artificial world. 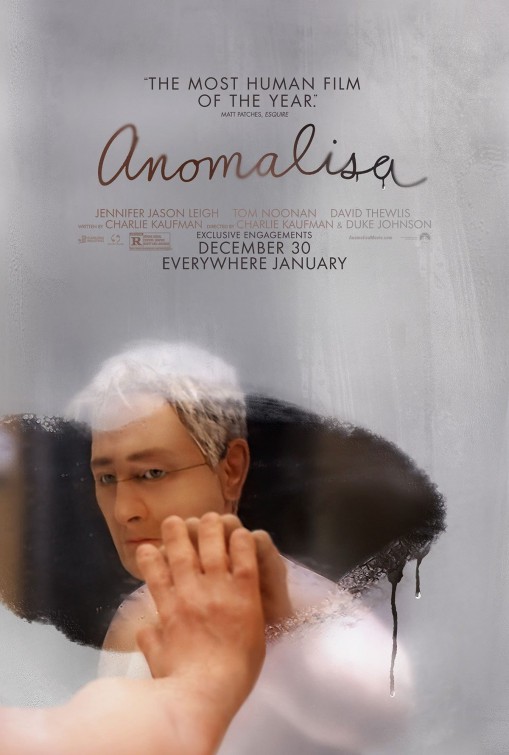