From its opening minutes, Denis Villeneuve’s Arrival marks itself out as something different from your average alien invasion movie. We’re alerted to the arrival of the aliens not through a crash-bang-wallop action scene but through the chirps of text messages, as linguistic professor Louise Banks (Amy Adams) finds her class interrupted by the sudden and shocking news. From that point on, the film handles this event in a grounded and realistic way, examining both how humanity would actually deal with something like this but also broader themes of language, time and grief in a film that is both stunningly relevant and devastatingly human.

The alien ships – imposing lozenge-shaped slabs of dark metal – position themselves in twelve seemingly unconnected locations across the world, one of which being Montana in the US. They hover, silently, just above the ground with unknown intentions. The priority for the US military is to open up the lines of communication and find out what the aliens’ purpose is, which essentially becomes the puzzle at the centre of the film. Thanks to a previous gig translating for the military, Banks is recruited by Colonel Weber (Forest Whitaker) to team up with theoretical physicist Ian Donnelly (Jeremy Renner) and decipher the alien language and find a way to talk to them.

As with much of Villeneuve’s previous work – which includes Sicario, Prisoners and Enemy – the tone here is chilly and foreboding. He builds slowly to the reveal of his creatures, which come to be known as Heptapods. When Banks and Donnelly finally head into the spacecraft to meet them, it’s a scene of ominous tension that eventually gives way to curiosity and wonder. The otherworldly visitors stay in an eerily bright and foggy room, behind a clear barrier to retain a safe atmosphere for their human counterparts. They appear peaceful and communicate via gas clouds, omitted from their tentacles, that settle into inky black circles.

The film gets deep into the nuts-and-bolts of Banks’ process for teaching the extra-terrestrial visitors our language and deciphering the circular, non-linear language that they use. Though the movie is light on obviously dumbed down, “in English, doc!” moments, there are some explanatory scenes in the form of Banks selling her methods to Weber and sceptical government suit Agent Halpern (Michael Stuhlbarg). In order to ask them “what do you want?”, Banks explains, she must first teach them the concept of “you”. This exploration of language – its importance and what it represents – is quietly fascinating, more so than the explosions and empty spectacle of most sci-fi that makes it to the big screen.

As Banks begins to make progress with the heptapods, she has to hold back the military, who worry about the intentions of the extra-terrestrials and start to get a twitchy trigger finger. Other armies across the world haven’t been so restrained, with China looking to go to war with the aliens and others eager to follow their lead. Reacting to uncertainty and fear of the other with violence is of course a timely topic and there’s a sad familiarity in seeing the nations involved begin to squabble about how to cope with their new visitors and, ultimately, stop communicating with each other altogether.

Much like Christopher Nolan’s Interstellar – a comparable film, though more bombastic – Arrival has a powerful human edge that compliments and elevates the sci-fi story. At the centre of that is Adams, who turns in one of the performances of her already sterling career, as a focussed, super-smart professional woman. But she is also a woman reeling from a personal tragedy, and the more she delves into the puzzle of this alien language, the more the memories of this incident begin to plague her. It’s a subtle and largely quiet performance, with Adams conveying reactions and emotion through the tiniest of movements, all captured in close-up by Villeneuve and the brilliant Selma cinematographer Bradford Young.

As the film reaches its climax, it becomes clear just how brilliant a film Arrival is, in ways that are better experienced as fresh and unspoiled as possible. But rest assured, it is a satisfying conclusion to a puzzle that hides all of its answers in plain sight, ultimately revealing itself as something as hopeful and life-affirming as it is utterly devastating. Villeneuve has always shown himself a supremely talented craftsman but sometimes lacked material to match his skill behind the camera; in Eric Heisserer’s script – based on Ted Chiang’s Story of Your Life – he has found that material, and the result is something special: a sci-fi film that engages the brain and tugs at the heart-strings in equal measure. 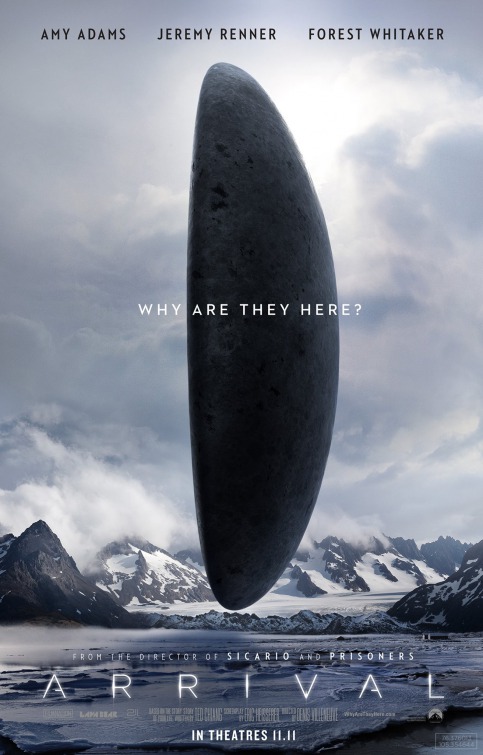