Comedy sequels don’t have the best track record, especially those that are so obviously rushed out to take advantage of the popularity of the first film. On the surface, Bad Neighbours 2 – or Neighbors 2: Sorority Rising in the US – looks like just another quick cash in, built to capitalise on the success of its smart and riotously funny 2014 predecessor. Bad Neighbours 2 doesn’t quite match those heights but is far from a throwaway follow up.

The first film saw Seth Rogen and Rose Byrne’s young parents Mac and Kelly find themselves embroiled in a feud with the hard-partying frat house next door, led by Zac Efron’s uber-bro Teddy Sanders. This film picks up a couple of years later. The frat has moved on and Mac and Kelly, expecting another baby, are selling their house. Meanwhile, Teddy’s frat bros have all moved on, including Dave Franco’s Pete who, in a welcome twist, is gay and engaged to be married. Pete and his soon-to-be-husband want Teddy to move out of their apartment but Teddy still hasn’t found his place in the real world.

But Teddy soon finds a purpose when he comes across Shelby (Chloe Grace Moretz), Beth (Kiersey Clemons) and Nora (Beanie Feldstein), three college freshman who are looking to start their own sorority in the old frat house. For Mac and Kelly, a sorority throwing ragers next door is a disaster: their house is in escrow and they have to keep the buying couple (Abbi Jacobson and Sam Richardson) sweet for 30 days to ensure the sale goes through. A polite suggestion that the girls keep their parties to a minimum for the next 30 days doesn’t go well and Mac and Kelly soon find themselves embroiled in another messy feud with the teens next door, with old nemesis Teddy in the sorority’s corner.

Despite the US title suggesting an 80’s, Porkies-style sorority exploitation flick, Bad Neighbours 2 mostly subverts that kind of cheap joke and is surprisingly progressive. The only reason Shelby and her buddies want to start their own sorority is because an archaic bylaw forbids sororities from holding their own parties and they’re tired of being objectified at creepy frat parties. The film also widely avoids objectifying the female characters itself and overall feels like a big step forward in that respect from both the first film but also this whole genre of bro-centric, raunchy comedy.

The film on the whole isn’t quite as big a step forward in any other way though, largely recycling the plot from the first film and bringing back some of the same jokes, only bigger. The obvious standout in that respect is the airbag prank that wasn’t even close to being the funniest thing about the first film but gets shoe-horned in here for big, broad laughs.

But this film doesn’t really need that: the smart lines and small character moments are much funnier than the bigger set pieces and that’s largely down to a strong ensemble of very likeable characters who are better fleshed out than you might expect. Rogen and Byrne have a great comedic chemistry and their millennial angst over becoming the old people has mostly subsided here, with that focus resting more on Teddy, whose struggle to transition into real adulthood is really the through line of both Bad Neighbours films. Efron is fantastic in the role – surely his best – and uses his looks, physicality and comic timing to great effect here.

The new additions are welcome too: Moretz is more at ease and natural here than she has been in other recent films and is ably backed up by the excellent Kiersey Clemons (of Dope and Transparent fame) and the madcap energy of relative newcomer Beanie Feldstein. Though these characters are positioned as antagonists for much of the film, they’re actually very sympathetic and have the film’s best arc, even if they don’t get as much time as they might have, thanks to the film spinning a few different narrative plates.

This might be a cash in but director Nicholas Stoller and his brilliant ensemble have ensured that it is a lot smarter and funnier than it could have been – or perhaps needed to be – even if it isn’t as laugh-out-loud funny as the first instalment. Fans of the series are unlikely to be disappointed by Bad Neighbours 2, though it might be time to let these characters live happily ever after. 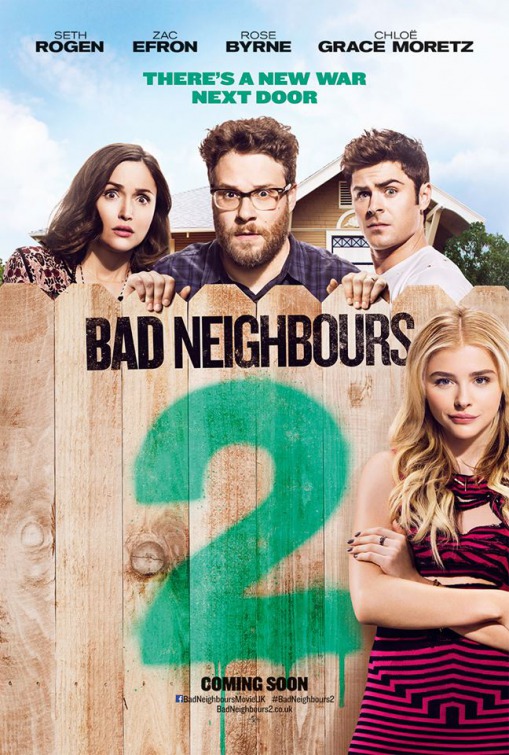