Despite there being no involvement from the man himself, Bad Neighbours – or Neighbors in the US – would feel right at home under the Judd Apatow umbrella. Helmed by Forgetting Sarah Marshall and Undeclared director Nicholas Stoller and starring Apatow’s go-to guy Seth Rogen, this is another exercise in gross-out gags and foul-mouthed improv, backed up by witty observations and some genuine heart.

Rogen stars alongside Rose Byrne as Mac and Kelly, a young couple with a newborn baby who are in the process of adjusting to parenthood and their new Suburban lifestyle. As if the lack of sleep and diminished sex life wasn’t enough to contend with, things get more complicated for the couple when a rowdy frat, lead by alpha bro Teddy (Zac Efron), moves in next door. Things are friendly at first, with Mac and Kelly offering the frat boys some weed in exchange for maybe keeping the noise to a minimum.

Of course that doesn’t last and the battle lines are drawn as soon as Teddy finds out Mac called the cops out to one of the frat’s parties. So begins a series of escalating pranks between the two factions that lead to some excellent sight gags and comic set pieces, involving a crudely trimmed hedge, strategically placed airbags and an unfortunate incident with a condom.

Bad Neighbours is essentially a collection of these big set pieces, with some quick and often filthy dialogue in between, laced together by a plot that ably mixes frat comedy with the struggles of newfound adulthood and in that sense, Mac and Teddy work as perfect adversaries. For Mac, Teddy is like the ghost of partying past and an extremely chiselled reminder that he’s now podgy, married and can’t party as much as he’d like. And for Teddy, Mac is a window into the painfully mundane future that’s right around the corner. That tension between youth and adulthood is at the heart of the film and Stoller touches on many of the themes that Apatow himself did in This is 40, only in a quicker, raunchier and ultimately funnier way.

Much of the film’s success is down to its cast. Rogen and Byrne make an appealing couple with some great comedic chemistry. As their divorced best friends, there are funny turns from Undeclared’s Carla Gallo and especially The Mindy Project’s Ike Barinholtz who steals a number of scenes. On the other side of the fence, Efron is well cast as the ultimate bro and continues to subvert his High School Musical image with another bad boy turn that’s tinged with some darkness beneath the musclebound front. As his best friend and Vice President of the frat – apparently that’s a thing – Dave Franco earns some of the film’s biggest laughs.

A few of the gags lean a little too far toward gross-out – a breast feeding scene in particular – and the observations may be well worn but Bad Neighbours is wildly entertaining and often achingly funny, emerging as Stoller’s best film and staking an early claim for the title of comedy of the year. 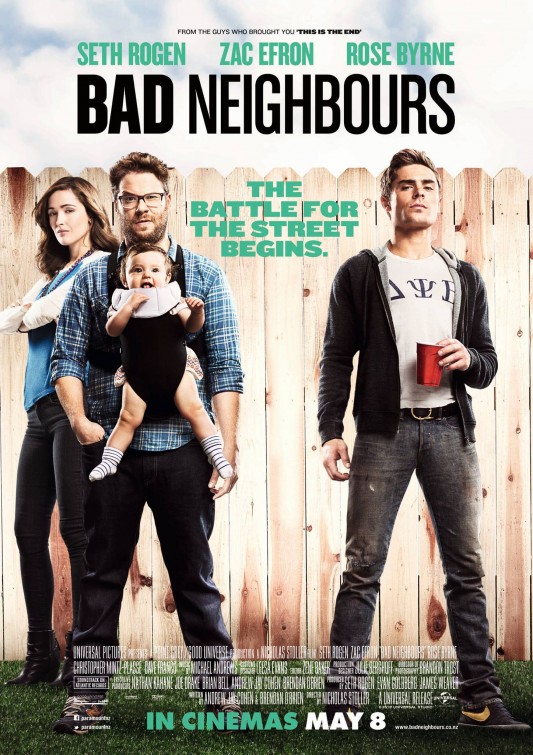