After endless remakes, reboots and adaptations of every movie, novel or comic book out there, Hollywood seems to have finally ran out of ideas and are now turning to board games for inspiration. Enter Battleship, a cynical cash in on the success of the Transformers franchise that’s very loosely based on the classic Hasbro board game, only with added aliens. It really should be terrible, and on some levels it is, but director Peter Berg (Friday Night Lights) has managed to make it a big, dumb blockbuster that’s way more fun than it has any right to be.

Taylor Kitsch stars as Hopper, a loose-cannon Lieutenant on board the USS John Paul Jones, part of a fleet that becomes trapped inside a giant force field after five alien ships interrupt a Naval training exercise off the coast of Hawaii.

The aliens come from a planet in a different solar system that has a similar climate to Earth and have been alerted to our existence by an exploratory signal sent from a base in Honolulu. Their mission appears to be similar, coming only to explore but when the over-eager Navy opens fire, the extra-terrestrials become aggressive and hit back, hard.

After the alien attacks leave the John Paul Jones the only ship in the water, Hopper finds himself charged with saving the world along with his rag tag band of survivors including sassy weapons specialist Raikes (pop-star Rihanna, not terrible) and Japanese captain Nagata (Tadanobu Asano, Ichi The Killer).

Meanwhile Hopper’s girlfriend Sam (Brooklyn Decker) is stuck in a borderline needless subplot with a double amputee (real life Iraq vet and noticeable non-actor Gregory D Gadson) and the mandatory geeky comic relief character (Hamish Linklater), roaming around the satellite base that’s been taken over by the ETs to try to phone home.

All these characters are extremely broadly drawn and there’s no subtlety in their development, especially Hopper, with Berg spending the first 30-40 minutes of the film really hammering home just how useless and unreliable he is and then, lo and behold, he has to step up and be the hero.

At least the script provides ridiculous enough dialogue (“Let’s see if we can buy the world another day!”) and finds plenty of ludicrous scenarios to put them in. None less silly than the one reference to the board game, a cleverly contrived scene in which Hopper and crew have to combat the aliens by watching a grid and yelling out co-ordinates.

Somehow that scene, like most of the others in the movie, works. All the cheesy dialogue, wooden acting and ludicrous scenarios are instantly forgivable due to just how fun the film is. There’s a feeling that Berg and his cast know just how stupid all of this is but are having too much fun to care.

Clearly using Michael Bay’s Transformers as a template, Berg shows a sure hand with the action, mustering up some very big, very loud and often very impressive action sequences. The one problem with the action is the bland aliens who just seem to bend to whatever the script needs of them, going from peaceful to hostile or intelligent to downright stupid whenever it’s convenient.

It’s hard to call Battleship a good film since there’s so much blatantly wrong with it but if you check your IQ at the door and let the silly action thrills wash over you, it’s a fun ride and the perfect way to kick off the summer blockbuster season. 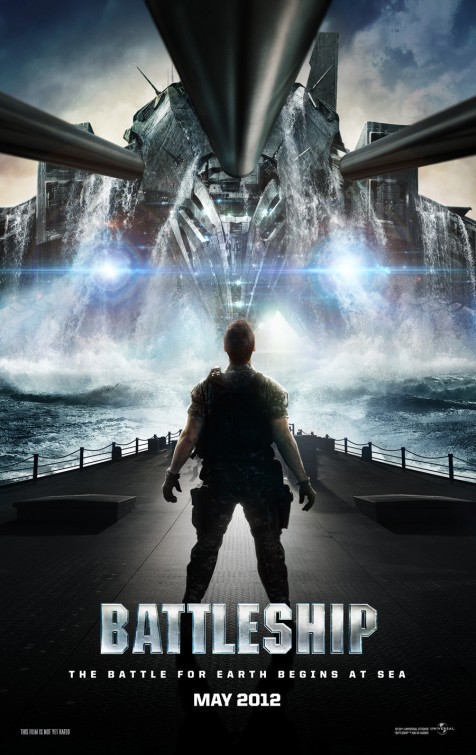