The most notable thing about Scott Cooper’s derivative but entertaining gangster flick Black Mass is the return of Johnny Depp: Serious Actor. After spending an increasing amount of his time as either his meal ticket Jack Sparrow, one of Tim Burton’s oversized caricatures or some variation thereof, Depp’s turn as legendary Boston gangster Whitey Bulger marks a distinct change of pace, even if it’s not quite an entirely straight role.

Not one to miss a chance to dress up, Depp sports a pasty, freckled bald cap and slicked hair combo, his teeth a rotten yellow and his dark eyes masked by chilling blue contacts. He makes Bulger a menacing, reptilian presence and every scene he’s in has a palpable undercurrent of tension, particularly in a dinner table scene where his tone switches from jovial to menace and back again, recalling Joe Pesci’s iconic “Funny how?” scene from Goodfellas.

In fact, Scorsese’s many films about street-level hoods are a clear influence on much of Black Mass, particularly The Departed which – although a remake of Hong Kong thriller Infernal Affairs – drew heavily on Bulger’s story, as well as the grimy Boston setting that Cooper’s characters occupy here. The characters feel familiar too: tough guys operating on different sides of the law getting involved in all kinds of corruption and murky deals, often based on neighbourhood loyalty and rarely working out well for anyone.

The story focuses on Bulger’s connection with John Connolly (Joel Edgerton), a neighbourhood kid who grew up to be a fed. Bulger and Connolly make a deal – approved by the sceptical higher ups at the Bureau – that allows Bulger to go about his illicit activities as long as he provides the feds with information to help them take down the local Mafia. Bulger is happy to get some leeway and watch his rivals struggle but not so hot on providing any useful intel or sticking to the rules of the agreement, but Connolly gets caught up in it all and seems to relish his flirtations with Bulger’s world.

The film is as much Connolly’s as it is Bulger’s, spending as much time on his divided loyalties as it does on Bulger’s criminal interests. While Depp has the flashier performance and the majority of the memorable scenes, Edgerton is very good as an essentially good man in love with his newfound importance, trying to stay in with the neighbourhood guys he grew up with while furthering his FBI career at the same time.

Much like with his previous films Crazy Heart and Out of the Furnace, Cooper’s direction is solid and he crafts real tension at times, but the narrative is never truly propulsive. Whereas a film like The Departed thrums with energy and verve, Black Mass is more plodding and slightly stodgy. The structure, which interlaces the action with conversations between the FBI and Bulger’s crew, leaves the film feeling choppy and doesn’t particularly add anything either. With these scenes disrupting the flow and the story vaguely jumping forward in time at numerous points, there’s no sense of Bulger’s rise to prominence and it feels like Cooper is often content just to focus on individual scenes of high tension, extreme violence or both.

Luckily for Cooper, he has a sterling cast to make many of those extremely watchable. The supporting cast is filled out with a roster of reliable character actors lending real quality to even the briefest of parts. Benedict Cumberbatch, Jesse Plemons, Rory Cochrane, W. Earl Brown, Peter Sarsgaard, Juno Temple, David Harbour, Adam Scott and Kevin Bacon all come and go, making a strong impression along the way. There’s also a pair of strong turns from Julianne Nicholson and Dakota Johnson as the partners of Connolly and Bulger respectively, with both actresses elevating roles that feel like afterthoughts into something more interesting.

So while this is an interesting move from Depp at this point of in his career and the bleak Boston underworld that he inhabits here feels authentic, Black Mass somehow feels like less than the sum of its parts, failing to really get under the skin of either of its leads or find anything beneath the standard gangster movie trappings it seems to revel in. 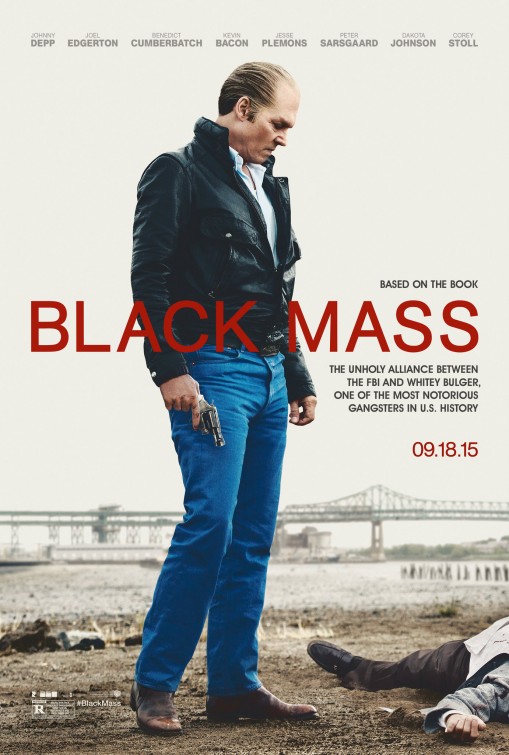