After spending almost three years on the shelf after MGM went bankrupt, it seemed like Cabin in the Woods would never see the light of day. Finally, thanks in no small part to writer/producer Joss Whedon and star Chris ‘Thor’ Hemsworth’s involvement in the upcoming superhero blockbuster The Avengers, it has made it out into the world. With any film that’s been stuck in development hell, there is always the suspicion that it’s going to be a disaster and while the circumstances are different on this occasion, the result is disappointingly the same.

Whedon and director/co-writer Drew Goddard (Cloverfield) aim for a post-modern spin on the horror genre, throwing together a group of unconvincing student archetypes set to make their way to a cabin in the woods for a weekend getaway. There’s the jock Curt (Hemsworth), the slut Jules (Anna Hutchison), the scholar Holden (Jesse Williams), the stoner Marty (Fran Kranz) and finally the virginal every girl Dana (Kristen Connolly).

From the moment they set off in their camper van it’s apparent that everything is not what it seems. The group are being closely watched in an underground bunker by Sitterson (Richard Jenkins) and Hadley (Bradley Whitford), whose subplot makes for the most interesting aspect of the film.

Once the kids are in the cabin, Whedon and Goddard start piling on the tired old horror movie clichés, presumably as a way of poking fun at the genre, but in creating a perfect imitation of a trashy horror film, all they really achieve is creating a trashy horror film. Whether the awful dialogue and often cringe worthy acting is on purpose or not doesn’t make it any less hard to watch and it makes the whole teen slasher side of the movie increasingly hard to stomach.

On the flipside are Jenkins and Whitford, who either get all the best lines or are just capable of delivering them properly. The two veterans are a blast to watch as they observe the kids in the cabin along with a bunker full of office workers. Why they’re watching and the extent of their involvement is drip fed throughout the film, leading to a series of twists that start off as intriguing and then just head straight for infuriating as the film builds towards a manic, messy bloodbath of a finale.

Shockingly for a Whedon film, the dialogue is so weighed down with exposition that it just feels clunky and the majority of the witty barbs fail to land. The blame for that could go to the young actors, all of whom seem wholly unnatural and badly miscast. Fran Kranz is probably the biggest perpetrator, whining his way through the film like a budget Owen Wilson, he makes for possibly the worst movie stoner of all time.

Looking to do for the horror genre what Scream did for well, the horror genre, Cabin in the Woods falls short of the wit and laughs of Wes Craven’s seminal slasher spoof and ends up an uneven mess that tries too hard to be clever and original, leaving some good ideas lost amongst the wild gore, genre cliché and clanging dialogue. 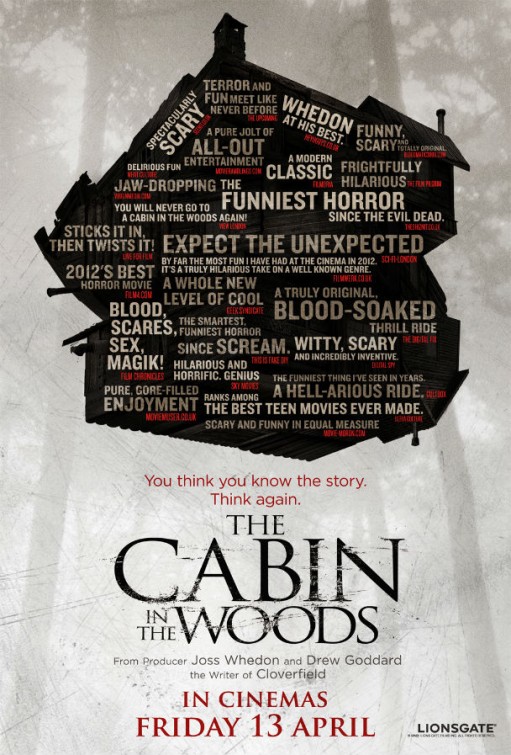