You know what you’re going to get with latter day Woody Allen. In this latest phase in his career, the controversial auteur has stuck to a familiar template more than ever in his career: upper-class people fall in and out of love in glamorous locations, often in a period setting. His latest, Café Society, is very much in that vein and continues a low-key purple patch for Allen that, barring the awful You Will Meet a Tall Dark Stranger, stretches all the way back to Vicky Cristina Barcelona in 2008.

Jesse Eisenberg stars as Bobby, stepping into the Woody Allen role for the second time, after the underrated To Rome With Love. It’s the 1930’s and Bobby has moved from New York to Hollywood, hoping to find a career in showbiz. His uncle Phil (Steve Carrell) is a big time movie producer and hires Bobby to run errands for him around town, tasking one of his secretaries, Vonnie (Kristen Stewart), to show the newcomer around town. Bobby and Vonnie hit it off and, though Vonnie has a boyfriend – who is older, married – Bobby pursues her anyway and romance begins to blossom.

Eisenberg and Stewart have played couples before in both Adventureland and American Ultra and they have a wonderful chemistry together. Watching them bat Allen’s old-Hollywood dialogue back and forth as they fall for each other is a delight. With his stuttering delivery and awkward physicality, Eisenberg is a perfect stand in for Allen, particularly in the brilliantly performed scene of screwball comedy early in the film that sees Bobby’s meeting with an escort (Anna Camp) go disastrously wrong. Stewart meanwhile is completely radiant, adding yet another excellent performance to her increasingly impressive recent CV. She is almost exclusively shot in flickering candlelight or warm sunlight, Allen showing her in the romantic glow that Bobby sees her, and Stewart brings a warmth and lightness to her performance that is often missing, even in her best roles.

After their romance hits a snag, the film jumps forward a few years and catches up with Bobby back in New York City. His brother Ben (Corey Stoll), a local hood and nightclub owner, sets Bobby up as manager of his club. Bobby slides into the high-society life, floating through the club every night and hob knobbing with the city’s elite. He even meets another woman, also named Veronica (Blake Lively), and we see him woo her with a confidence and self-assurance that he lacked earlier in the film. The couple eventually get married and have children together but the spectre of Bobby’s first love looms large over their relationship. Veronica knows it as well as Bobby does, so when Vonnie visits New York, things inevitably get complicated.

The various love triangles that occur here could’ve have been soapy and melodramatic but despite the setting, Allen keeps things low-key. There’s very little in the way of histrionics from his characters and even the zingers in his writing are relatively soft. There’s backstabbing and cheating and, in a clunky subplot, even some murder but the film never breaks a sweat, whisking us through the world of the ‘30s glitterati with ease. The film is light and breezy without being all that funny, yet it is still entertaining throughout and at times touches on the bittersweet nature of time passed and relationships cut short. With the charisma and chemistry of his two excellent leads, Café Society is Allen on charming and purely enjoyable form even if it never reaches the heights of his classics. 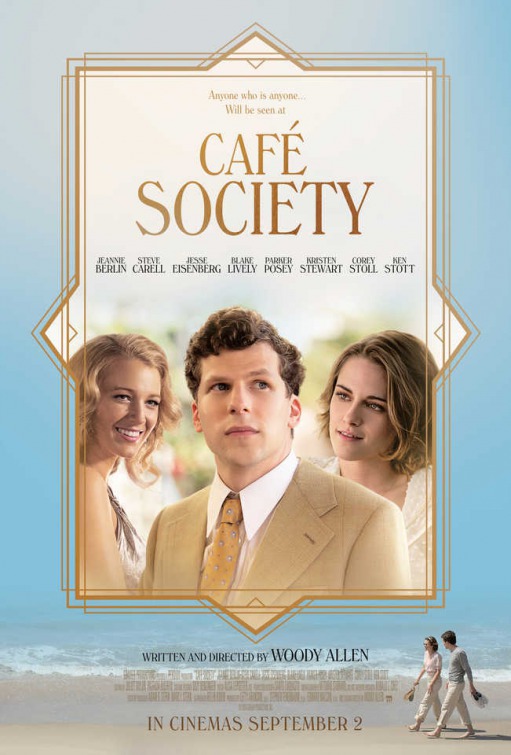