As the follow-up to her excellent 2015 debut The Diary of a Teenage Girl, writer-director Marielle Heller chose Can You Ever Forgive Me?, the true story of Lee Israel, a biographer who turns to forgery to make ends meet in 1980s New York City. Adapted from Israel’s memoir of the same name, the film stars Melissa McCarthy in a performance that takes her comedically abrasive persona and twists it into something more rounded and recognizably human.

Israel built a career writing biographies of celebrities from a bygone era, one of which even made it onto the New York Times bestseller’s list. But the appeal of these books is waning and the work is starting to dry up, leaving Lee short on her rent and struggling to pay the vet bills for her aging cat, Jersey. As poverty beckons, so does a life of crime, which starts with the sale of a stolen letter from vaudeville star Fanny Brice, and leads to the forgery of numerous letters from the likes of Dorothy Parker and Noel Coward.

In order to pass off her own work as that of these famous figures, Lee has to be very good at it, and she is, describing herself as “a better Dorothy Parker than Dorothy Parker”. But her knowledge of these characters and her ability to mimic them so perfectly is a symptom of a deeply lonely life, one where Lee is more comfortable disappearing into the lives of others than forging any meaningful relationships of her own. As much as the plot is driven by Lee’s burgeoning criminal career, Heller’s film is primarily a sensitively observed portrait of loneliness, centering on a woman who has succumb so fully to her own isolation that she drives everyone around her away.

Lee does strike up two very different relationships over the course of the film, though both are very different. One is a sweet romance with a bookstore owner, Anna (Dolly Wells), who has been buying Lee’s forgeries. Lee feels guilty about conning Anna but there’s something deeper holding her back from this relationship; her instinct is to push people away, regardless of how ready Anna is to offer affection and companionship. Her other new friend is Jack Hock (Richard E Grant), an erudite but downtrodden hustler who is similarly alone, though is far more pushy about making friends. Lee is reluctant to let him into her life but you get the sense that, deep down, she craves this kind of connection and involves Jack in her schemes not because she needs his help, but because she needs his friendship.

In the best role she’s had in years – possibly ever – McCarthy commits to playing a woman who could easily have been deeply unlikeable, but manages to make her a sympathetic and relatable character. McCarthy is still funny here for sure, but she is much more than that, finding real pathos in this grumpy, emotionally guarded woman without ever straining for easy sentimentality. She also finds a spiky chemistry with Grant, who is on delightful form in a performance that veers from hilarious to frustrating to something that’s ultimately very heartbreaking. The two prove to be a potent double act and are both well worth their Oscar nominations.

Heller steeps her film in a deeply lived in atmosphere, creating a world for her characters to inhabit that that feels every bit an accurate recreation of late-eighties Manhattan – all dive bars and run down apartments. But despite the scuzzy environments and the muted grey palette, Can You Ever Forgive Me? is a lively and compelling film with a sharp script and wonderful performances. It offers up no cheap sentiment or overblown emotion but is nonetheless affecting and quietly heartbreaking in its insightful and honest portrayal of loneliness, alienation and unlikely friendships. 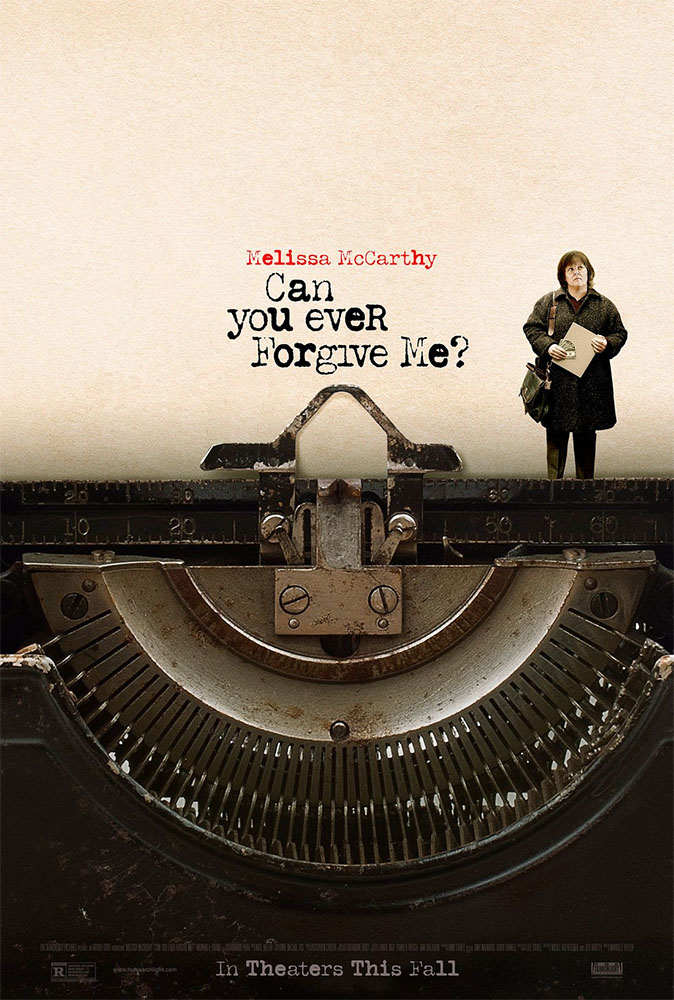