Steve Rogers, a sickly but determined wannabe soldier finds himself part of the Super Soldier program. And soon finds himself face to face with another recipient of the treatment.

With a hit or miss career as a Hollywood journeyman director behind him, Joe Johnston was hardly an obvious choice to helm one of the summer’s biggest releases and a key component in the build up to next summer’s Marvel epic The Avengers. But while not as perfect a match of director and material as, say, Shakespearean thesp Kenneth Branagh and Thor, Johnston’s keen eye for period detail and old fashioned Americana (last seen in 1999’s October Sky) really helps nail the boys own adventure feel of Captain America. Yes, this is a film that owes more to the Indiana Jones series than Branagh’s Thor and any previous entires into the superhero canon.

The early scenes land us in 1942 New York and introduce us to 90lbs weakling Steve Rogers (Evans), desperately trying to make his way into the army, applying multiple times, and facing rejection multiple times. It’s this tenacity, however, that brings Rogers to the attention of Dr. Erskine (Tucci), a military scientist who sees the potential in Rogers to be the subject of his next experiment. Finally excepted to the army, Rogers is shipped off to a boot camp where he meets English special agent bombshell Peggy Carter (Atwell) and grizzled army vet Col. Phillips (Jones). It’s these scenes that are some of the strongest in the film, giving Evans, with the help of some outstanding effects, the chance to display enough underdog charm and all round likeability to ensure this is someone we’ll still be rooting for when he’s a beefed up super soldier punching out evil Nazis.

Nazi’s, of which there are plenty, and none more evil than Hugo Weaving’s diabolical Johann Schmidt, better known as Red Skull, head of Nazi offshoot HYDRA and one of Erskine’s earlier experiments, leaving him with all of Rogers’ new found abilities and, yes, a red skull. After tracking down a mysterious artefact in Norway (comic book fans will recognise it as the Cosmic Cube), Schmidt plans to harness the power of the Cube to destroy America and presumably win WW2.

The film naturally leads to a climactic showdown between Cap and Red Skull, but between the promising early scenes and the super hero/villain face off, there’s a somewhat disjointed middle third. It’s this section that lets the film down, spending too long on Rogers’ time as a propaganda machine than it does showing him getting to grips with his powers and becoming the Captain America we’re all expecting. It’s this that makes things feel slightly rushed when Cap rushes into battle to rescue his best friend James ‘Bucky’ Barnes (Sebastien Stan). We’re then given a montage and not much else to build Cap as the ultimate weapon before we’re thrust right into the final mission.

Despite that slight setback, there are many strengths here. As well as nailing the period setting, Johnston shows a good touch for comedy which is essential here as this material played too straight could slip right into the unintentionally hilarious. The cast also avoid any of the pitfalls of playing potentially ridiculous comic book characters, finding just the right pitch for each character. In his first major leading role, Evans is an immensely likeable everyman, bringing a light touch to the humour of the earlier scenes and credible physicality to the later action sequences. He anchors the film well and solidifies himself as Captain America, essential for the man who rose to fame as the Fantastic Four’s Human Torch.

He’s ably supported by Hayley Atwell, perfecting the period look and bringing plenty of sass to the role. Tommy Lee Jones can play gruff mentors in his sleep and has a few good scenes here, providing much of the comic relief along with Stanley Tucci. Hugo Weaving once again proves a more than capable villain, chewing the scenery with an over the top German accent and bright crimson head that’s actually slightly less frightening than his own. 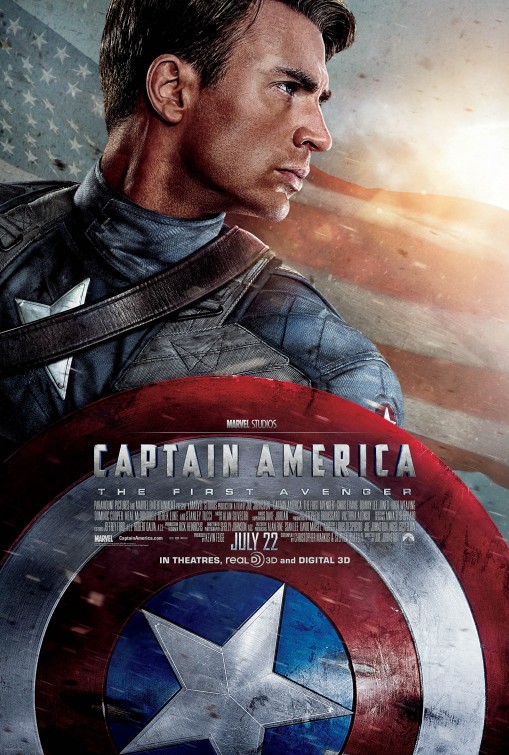