Dumping a group of American tourists in the middle of Chernobyl, the site of the worst nuclear disaster in history, is an intriguing premise right from the off and Chernobyl Diaries, written by Paranormal Activity guru Oren Peli, gets off to a good start.

Backpacking in Eastern Europe, American twenty-somethings Chris (Jesse McCartney), girlfriend Natalie (Olivia Dudley) and her friend Amanda (Devin Kelley) meet up with Chris’ brother Paul (Jonathan Sadowski) in Ukraine. The plan is to move on to Moscow next but Paul has other ideas and arranges a trip to Chernobyl with ex-special forces and ‘extreme tour guide’ Uri (Dimitri Diatchenko).

Along with Aussie tourist Michael (Nathan Phillips) and his Norweigan girlfriend Zoe (Ingrid Bolso Berdal), the group set off to Prypiat, the seemingly deserted town that lies in the shadow of the Chernobyl power plant.

Though the endangered tourists angle is slightly cliché, bolstered by many other tired tropes (impending marriage proposal, brotherly tension, possible romance), the set up actually works with the Hungarian and Serbian sets making a suitably eerie Chernobyl substitute. There are even a few effective jump-scares from a mutated fish and a bizarre appearance from a bear.

But once the scene is set, the tension starts to disappear as quickly as the characters do. It quickly becomes apparent that the town isn’t as deserted as it should be and the hapless tourists finds themselves confronted by rabid dogs and a host of other gruesome mutants, all cunningly concealed to preserve mystery and save on budget. However, as soon as the group come under attack, the wheels fall off the film as Peli’s script presents a number of muddled scenarios that go in circles before getting to the film’s unsettling conclusion.

Chernobyl Diaries has a strong set up then and first-time director Bradley Parker creates some creepy imagery on a modest budget but there just aren’t enough scares and no reason to really care for any of the characters, leaving the second half of the film feeling dull and uninspired when it should have been at its most shocking.

DVD extras include an alternate ending that’s debatably more haunting than the one left in the movie, one deleted scene, a couple of viral videos and a trailer. 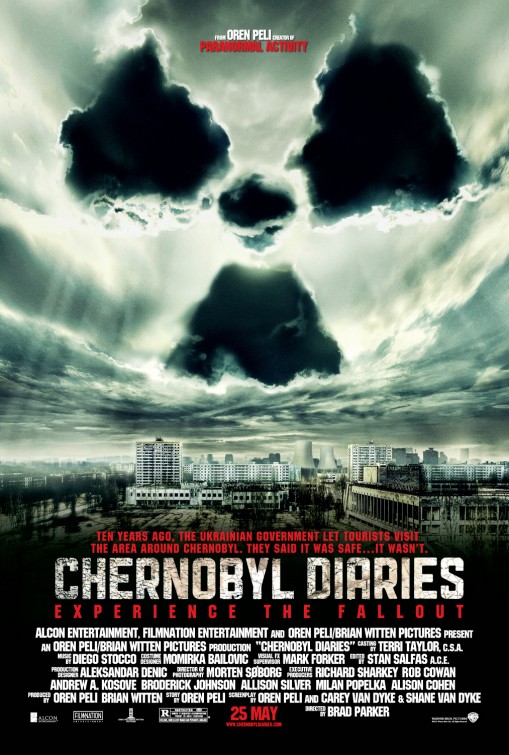