This is one film at least that does exactly what it says on the tin. Director Matthias Hoene’s debut effort features an abundance of the undead and several generations of Cockney wide boys (and girls) complete with rhyming slang and aversion to legality.

Brothers Terry (Rasmus Hardiker) and Andy (Harry Treadaway) have hatched a not-so-cunning plan to rob a local bank in order to raise funds to save the Bow Bells nursing home and prevent their grandad from suffering the horror of being relocated up North. With their cousin Katy (Michelle Ryan) and more experienced criminals Mental Mickey (Ashley Thomas) and Davey Tuppence (Jack Doolan) in tow their plan seems to be going surprisingly well until a hostage situation develops and Mickey lives up to his nickname.

Meanwhile at a nearby building site, where the gang acquired their elaborate disguises, a centuries old tomb has been disturbed and the zombie menace unleashed.

The well executed title sequence seems to belong to a slightly different film as the look of the movie itself comes across as old fashioned but not in a bad way. The desaturated visuals give it a 70’s feel that sometimes makes it appear to be a period piece but it is not obvious if this is the case and would have little relevance to the story.

Comedy horror is quite a difficult tonal combination to pull off and on this occasion is not done entirely successfully. The absence of tension robs some off the laughs of their relief value and well executed gore does not substitute for the genuine horror that could have accompanied some of the situations encountered by the characters, particularly the siege at the nursing home or being tied up a few feet from a newly turned zombie.

Beyond the special effects the cinematography results in some effective shots but there are a few times where the staging seems muddled and the comedy descends too easily into slapstick, the punt a particularly notable moment that probably plays better after a few beers.

The older half of the cast features some vintage British character actors including Honor Blackman (reverting to what may be her natural cor blimey accent), Richard Briers, Dudley Sutton and Alan Ford, who is so unrelentingly angry throughout as the boy’s grandad that you fear for him medically never mind the zombies outside.

The script by James Moran doesn’t seem quite as sharp as his excellent work on the underrated Severance where the humour seemed more natural but there are still a few chuckle worthy moments and the odd rough line is often saved by enthusiastic delivery.

The desolation of London is very well done considering the budget and even though it amounts to no more than a few well dressed streets and many columns of smoke does give the sense, along with the hordes of zombie extras, that the East End has fallen.

While some elements of the flick fall below par the seemingly genuine camaraderie of the main cast and some nice moments will carry most viewers through the brisk 1:28 running time (the end credits song may be the most horrific thing about the entire movie and is definitely best avoided).

Here’s hoping that Cockneys vs Werewolves turns out even better. 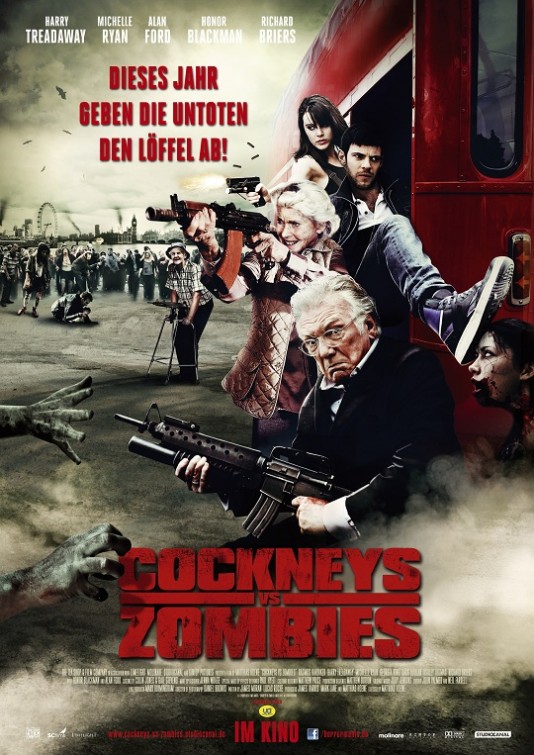