When Cal’s (Steve Carrell) wife Emily (Julianne Moore) asks for a divorce, his life begins to fall apart. After meeting lothario Jacob (Ryan Gosling), Cal turns into a ladies man, only to realise it’s still his wife he really wants, a realisation that makes Jacob rethink his lifestyle.

When Cal’s (Steve Carrell) wife Emily (Julianne Moore) asks for a divorce, his life begins to fall apart. After meeting lothario Jacob (Ryan Gosling), Cal turns into a ladies man, only to realise it’s still his wife he really wants, a realisation that makes Jacob rethink his lifestyle.

Glen Ficarra and John Requa’s Crazy, Stupid, Love tries it’s hardest to be something different, to be a romantic comedy that doesn’t succumb to generic formula. The fact that it at least tries already makes it better than most romantic comedies and, though it isn’t entirely successful in its attempts, what emerges is a funny, sweet romcom with a fantastic cast.

Heading up the cast is Steve Carrell as Cal, a married father of two, comfortably coasting towards middle age when his wife Emily (Julianne Moore) asks him for a divorce and confesses that she has slept with work colleague David Lindhagen (Kevin Bacon). Drowning his sorrows in a bar night after night, Cal’s sad sack appearance and endless stories about his wife draw the attention of smooth lounge lizard Jacob (Ryan Gosling), who’s having his own troubles trying to woo Hannah (Emma Stone). Jacob offers to give Cal a makeover and transform him into a smooth-talking ladies man via a makeover montage sequence reminiscent of the superb 40 Year Old Virgin. Cal’s new image eventually leads to a number of random conquests which only make him yearn for his wife even more. Also tangled up in this mess is Cal and Emily’s 13 year old son Robbie (Jonah Bobo) who’s struggling to accept his parents divorce and wonders why his dad doesn’t fight for his mom the way he’s fighting for 17 year old babysitter Jessica, who harbours her own crush on Cal.

Crazy, Stupid, Love is stacked with characters, each one well played and plausible, though the film struggles to give even focus to each of them. After an initial meeting early on in the film, Jacob and Hannah aren’t reunited again until fairly late in the film, at which point the pair promptly disappear again, only to reappear when the plot demands it. It’s particularly jarring with Jacob, who for the first half of the film is a pivotal character so his absence is felt more than Hannah, who spends most of the film on the sidelines. This disjointed feel is the film’s biggest flaw, leading to an uneven tone and often distracting from the many positives that are present.

However it is a testament to the cast that we actually want to see more of these characters. Like many big comedy actors, Steve Carrell is capable of portraying deep sadness and depression as he has done in previous efforts Little Miss Sunshine and Dan In Real Life. His performance here, though in a broader film, is closer to those films than any of his outright comedy roles, injecting Cal with a real sorrow and longing for his wife, as well as a deep regret that he let her slip away in the first place. As his pickup mentor Jacob, Gosling shows new range after his cold, violent performance in this month’s Drive, all fake tan and smooth talk, unshakeable until he meets Emma Stone’s Hannah, who’s as loveable as any Stone character.

The film contains some genuinely brilliant scenes, the pick of the bunch being a heartbreaking late night phone call from Emily to Cal that subtly plays out to perfection, illustrating that their love for each other is still very much there. Jacob and Hannah’s first night together doesn’t play out how you’d expect and is in fact exceptionally cute and handled brilliantly by both actors. These subtle scenes of drama and poignancy are occasionally let down however, with the script skewing off into farce and sitcom contrivance towards the end with a lawn brawl and a twist that’s genuinely surprisingly, though ridiculously contrived.

Though it never fully reaches its potential as Ficarra and Requa can’t quite balance their talented ensemble, the final product is still a high level romantic comedy with some well worked laughs and some moments of real feeling, all played by a likeable, talented cast. 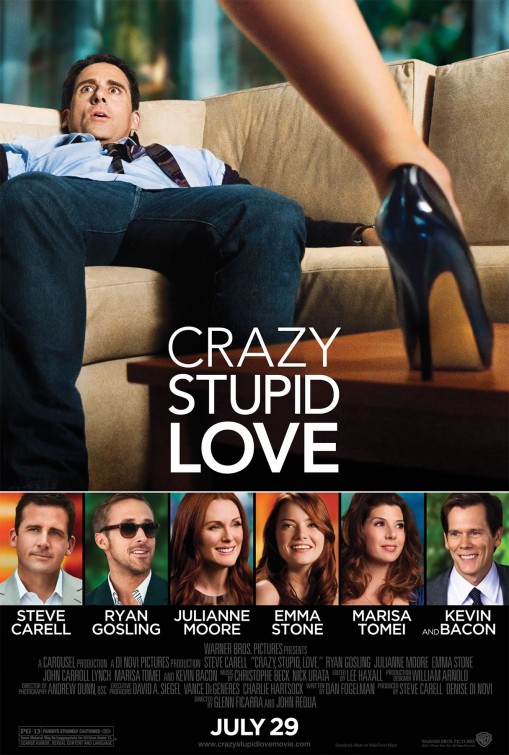