Back in 2011, Rupert Wyatt’s prequel/reboot Rise of the Planet of the Apes surprised pretty much everyone by being a smarter-than-average blockbuster that made a computer-animated ape a sympathetic and compelling character. While that film benefited from low expectations, its follow up arrives with a lot of hype and incumbent director Matt Reeves had a big job on his hands ensuring Dawn of the Planet of the Apes lived up to it.

There’s no need to be worried. Reeves’ film takes the ball and runs with it, with the Cloverfield and Let Me In man proving a more capable action helmer than his predecessor without losing sight of the layered characters and smart storytelling that made Rise such a pleasant surprise.

Dawn picks up ten years after the events of Rise, with the human race almost wiped out by the man-made ‘simian flu’ and the apes, led by Caesar (Andy Serkis), are thriving in the forests outside of San Francisco. They have built their own society and communicate via a sophisticated mix of sign language and speech, living by a strong code that states “Apes together strong” and “Ape not kill ape”.

But when Caesar’s son Blue Eyes (Nick Thurston) stumbles across a group of humans in the forest, the balance of the apes’ burgeoning community is disrupted and tensions begin to rise. Caesar has better experiences with humankind than most of his fellow apes and while he knows he has to show strength, he is reasonable and willing to cooperate with the humans in their mission to fix a dam and restore power to the city.

He allows a small crew, led by level-headed good guy Malcolm (Jason Clarke) and former doctor Ellie (Keri Russell), into the community and helps them with the dam. This angers Caesar’s right-hand-ape Koba (Toby Kebbell) – whose memory of humanity mainly involves laboratories and painful experiments – and the seeds of rebellion are sown.

The script – from Rise writers Rick Jaffa and Amanda Silver, as well as Wolverine scribe Mark Bomback – is refreshingly smart for a film of this scale, presenting two factions without telling us who we should be rooting for. There’s good and bad on both sides; just as Koba hates humans and wants all-out-war, Caesar is content to let them have their patch and get on with their lives. Malcolm and Ellie agree but many of the humans, including their leader Dreyfus (Gary Oldman), blame the apes for the current state of humanity and want to wipe them out.

The fact that both sides have their own complex dynamic, with sympathetic characters in both camps, makes the inevitable conflict all the more interesting and, ultimately, tragic.

Crucial to making it all work is Caesar and once again, Andy Serkis delivers a knockout motion capture performance, aided by some stunning, photorealistic animation from WETA digital. Caesar is older now, wiser but more world-weary, and it’s written all over his astonishingly expressive face and expertly rendered body language. As with all of Serkis’ mo-cap performances, this again raises the question about where Serkis’ acting ends and the effects take over, and no doubt this will be a hot topic come awards season. During the film however, there is no questioning this, just acceptance that Caesar and his fellow apes, played by the likes of Toby Kebbell and Judy Greer, are real characters that we can, and do, become invested in.

The human stars here are actually outshone by their digital counterparts, though it’s largely an issue with the writing rather than the acting. Jason Clarke and Keri Russell bring nobility and warmth, respectively, to fairly straightforward roles and Gary Oldman is dependable in a surprisingly small, underdeveloped part.

With a clever script that could be seen as an allegory for any number of real-world conflicts, both old and new, Dawn of the Planet of the Apes is a summer blockbuster that manages to tackle heavy, gloomy material without losing the entertainment factor; for all of its dramatic heft, there are still scenes of gun-toting apes riding on horseback through fire. The ending suggests there is plenty of life left in this franchise which, considering its position as the sharpest of summer tentpoles, can only be seen as a good thing. 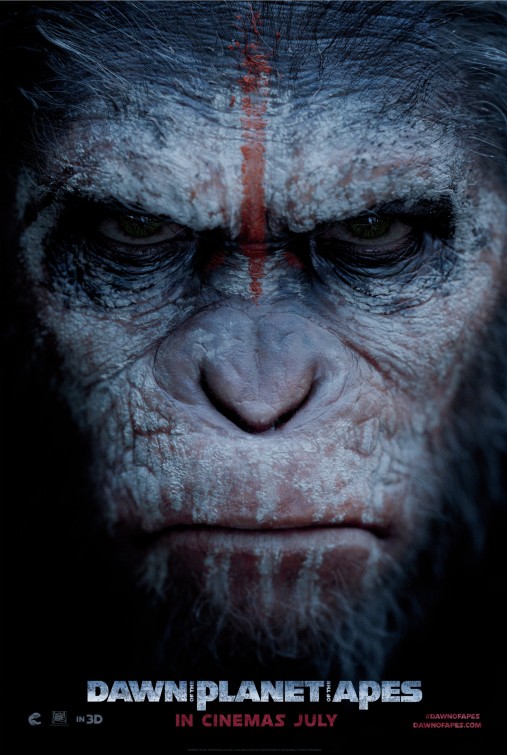