On the surface, Dunkirk might seem like an unusual film for Christopher Nolan, a filmmaker known for intricately plotted, mind-bending blockbusters. A seemingly straightforward telling of a well-known World War II story sounds all a bit pedestrian for the man who brought us Interstellar and Inception. But Nolan being Nolan, he has devised an elegant narrative structure that offers multiple perspectives on the harrowing evacuation that saw 300,00 troops escape from port in Northern France.

Nolan divides the story into three segments: The Mole, focussing on a young infantryman (Fionn Whitehead) trying to survive long enough to make it off the beach; The Sea, which tells the story of a middle-aged sailor (Mark Rylance) making his way across the channel in his yacht as part of a civilian effort to help out; and finally, The Air, which follows two Spitfire pilots (Tom Hardy, Jack Lowden) as they do battle with the Luftwaffe in the air above the beach. These three chapters take place over a week, a day and an hour respectively, but are seamlessly woven together in a way that provides new perspectives and continually ramps up the tension.

Though the likes of Hardy and Rylance provide some familiar faces, there’s no real lead here, nor are any of the characters explored in any great depth. Nolan doesn’t offer up flashbacks or poignant family photos to give us a glimpse of the characters’ former lives. Instead, he draws us in with the situations the characters find themselves in, whether it be the ticking-clock peril of Hardy’s fuel running low or Rylance’s display of the British stiff upper lip as he carries on his journey in the face of great adversity and painful loss.

It’s a surprisingly subtle approach for Nolan, abandoning his penchant for clunky exposition in favour of minimal dialogue, letting the film earn an emotional reaction without ever straining for one. It’s the film’s smaller moments that are the most moving: the sight of a Spitfire gliding across the beach, a soldier burying his head in the sand as the bodies fly around him or one man wandering hopelessly into the sea. These images all linger in the mind without the need for any dialogue to build them up. When the film does lean on dialogue more, it’s less successful, particularly the scenes involving Kenneth Branagh’s Colonel, who seems to exist just to deliver exposition and pine for old Blighty with the kind of moist-eyed patriotism that feels dropped in from another film.

With Dunkirk, Nolan has crafted a film that both feels both at home next to his previous work but also an exciting step in another direction. His usual preoccupations are all explored – water, drowning, time – and most of his regular collaborators are present and correct (listen out for Michael Caine). But this is a leaner, tighter film that’s built entirely on thrilling, immersive action and rapidly increasing tension, aided by both Hans Zimmer’s propulsive score and Hoyte van Hoytema’s stunning cinematography. The final result is a film that’s both thrilling and mournful, a technically brilliant exercise in tension and suspense, and a sweeping epic that is as bleak as it is beautiful. 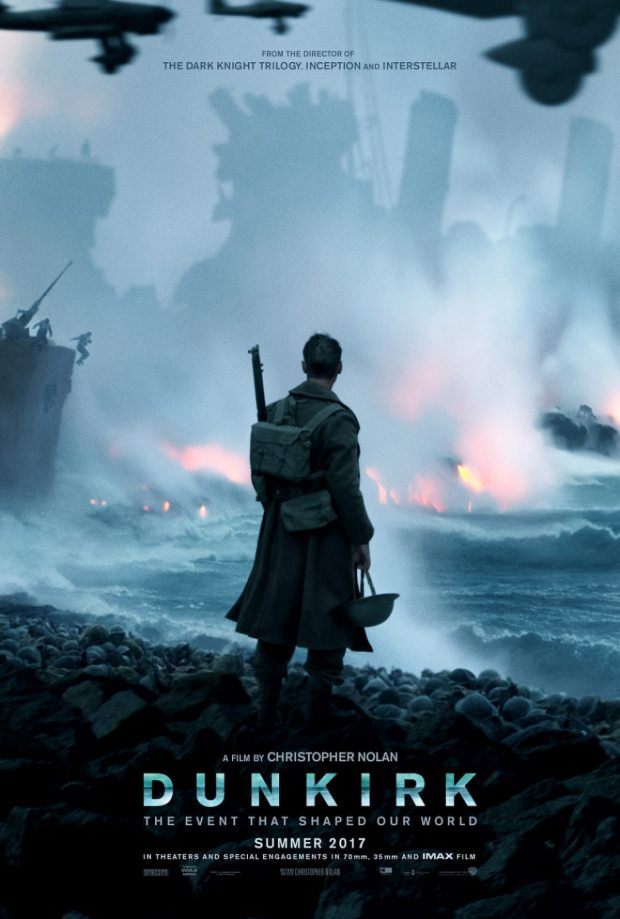