In a future where humankind is doing battle with a spidery alien race known as ‘Mimics’, Tom Cruise plays Major William Cage, the man charged with saving humanity as we know it. It’s a set-up that sounds like a pretty standard Tom Cruise action flick but in fact, Edge of Tomorrow is a very different – and far more entertaining – prospect.

For starters, Cage isn’t your average Cruise character. Though he is in the military, he is nothing more than a PR man, a smarmy face leading the campaign against the Mimics. After getting on the wrong side of Brendan Gleeson’s no-nonsense General, Cage finds himself thrust onto the front lines in France as part of a team of misfit soldiers lead by Bill Paxton’s Kentucky-bred Sergeant Farrell.

The fun starts when Cage is sent into combat and – along with the rest of the army – is swiftly killed by the alien adversary. Rather than stay dead, Cage wakes up at the start of the day, back at bootcamp and preparing to go into a battle he knows will result in everyone’s death. He seeks the help of Rita Vrataski (Emily Blunt), the army’s most famous and fearsome soldier, known affectionately as the ‘Full Metal Bitch’.

With Rita’s help and infinite practice time, Cage begins to figure out what he has to do to avoid destruction in the first battle and find the source of the Mimics powers, stopping them from wiping out humanity.

Edge of Tomorrow is essentially a video game movie that isn’t based on a video game. Cage has a never-ending supply of lives and if he gets it wrong, he knows he’ll just end up back at the same checkpoint and start again. Watching someone play a video game isn’t nearly as fun as playing it yourself but director Doug Liman has a lot of fun with the premise, milking laughs from the numerous death scenes and the repetition of Cage’s scenario.

Wisely before that repetition and the lack of stakes begins to bore, Liman and screenwriters Jez and John-Henry Buttersworth – along with Cruise’s regular collaborator and newfound best bud Christopher McQuarrie – change it up, giving us a reason to care if Cage and Rita live or die. It’s a crucial switch in terms of tension but also means the second half is a more sombre affair than the fast and breezy first half and while the change in pace is noticeable, there’s already enough invested in the characters to keep it engaging enough.

The two leads play a big part in this. Tom Cruise is effectively just giving us another spin on his usual onscreen persona but he has an arc we can care about, as his cowardly ad man finds strength and bravery over the course of the film. It isn’t the most original path for a character to take, but for Cruise, it feels like a nice change of pace. It’s also refreshing – in the first half at least – to see a female character be the strongest character, with Emily Blunt giving a suitably ass-kicking performance before peeling away a few layers to reveal the vulnerability beneath her hard exterior. It’s unfortunate that the roles are reversed as the film progresses but understandable given the trajectory of the characters.

Without much hype or excitement around it, Edge of Tomorrow has emerged as the pleasant surprise of this summer tentpole season. Playing out like Groundhog Day meets any number of sci-fi video games, it may not be deep or particularly resonant, but it’s certainly a lot of fun and, despite an often derivative plot and structure, feels fresh amidst the sequels and reboots that dominate the summer. 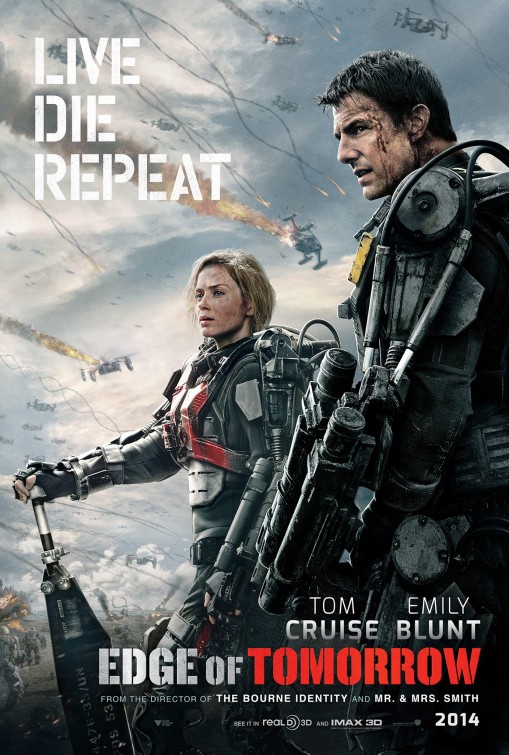