Henry James’s short novel What Maisie Knew provides the basis for this excellent drama from directors Scott McGehee and David Siegel, updating the book’s setting from the late 1800’s to modern day New York. While divorce nowadays is far more accepted and banal than it was in James’s time, two self-absorbed parents using their young child as a bargaining chip in their nasty break-up is troubling in any century.

The majority of the story is seen from the point of view of six-year-old Maisie (Onata Aprile) as she watches her parents’ marriage break down around her. Beale (Steve Coogan) is a high-flying art dealer and Susanna (Julianne Moore) is an established rock musician. Their fights escalate quickly and lead to a break-up early in the film, with Beale moving out and taking Maisie’s beloved nanny Margo (Joanna Vanderham) with him.

Despite both parents fighting so hard to keep Maisie, it seems neither one particularly wants the trouble of looking after her and she quickly becomes nothing more than a pawn in their increasingly petty games. Beale and Margo end up getting married and win custody of Maisie, though Beale ends up out of the country most of the time on business. Susanna fights tooth and nail to get her little girl back, even marrying nice-but-dim bartender Lincoln (Alexander Skarsgard) to try and appease the courts. But as soon as the chance at a tour comes up, she jumps in the bus with her band and leaves Maisie with Margo, Lincoln or whoever will look after her at the time.

While Maisie’s parents mean it when they say they love her, neither one seems willing to put her ahead of their own wants and desires and instead just want her to spite the other. Seeing this go on from Maisie’s point of view is often heartbreaking, particularly as the adults seem to think that some belated guilty affections can undo the effects of their selfish actions.

As Maisie, Onata Aprile is perfectly cast. Wisely, the filmmakers avoid giving her any grandstanding or moments of overly precocious insight. Instead she acts just like a child would, trying to ignore the arguments between the grown-ups that she doesn’t understand.

It’s not all doom and gloom for Maisie though, she has a great relationship with her makeshift parents, Margo and Lincoln. As her live-in nanny and now stepmother, Margo already has an established bond with Maisie and is a loving and responsible carer. It isn’t so easy for Lincoln though as Maisie is initially hesitant but their relationship grows in a natural, sweet way to the point that it’s hard not to get a lump in the throat seeing them playing together in the street or cooking together.

In her feature film debut, Scottish actress Vanderham gives a strong performance of a woman really struggling to keep it together while stuck in the middle of a disastrous relationship. Skarsgard is similarly impressive, playing against type as a sweet slacker with a heart of gold.

However, any scene of Maisie enjoying life with Margo or Lincoln has a palpable sense of dread, waiting for one of her monstrous parents showing up out of the blue and ruining the party. While that tension is effective, it would’ve been nice to have had one or two scenes of tenderness between the parents and their child instead of painting them in an almost one-dimensional light. Susanna in particular is portrayed as a real monster, despite some strong work from Moore trying to round the character.

Throughout the film though, the key relationships feel credible, leading to a heart-warming conclusion that feels real and logical for these characters. What Maisie Knew takes you through the emotional wringer but is a domestic drama that’s never less than compelling. 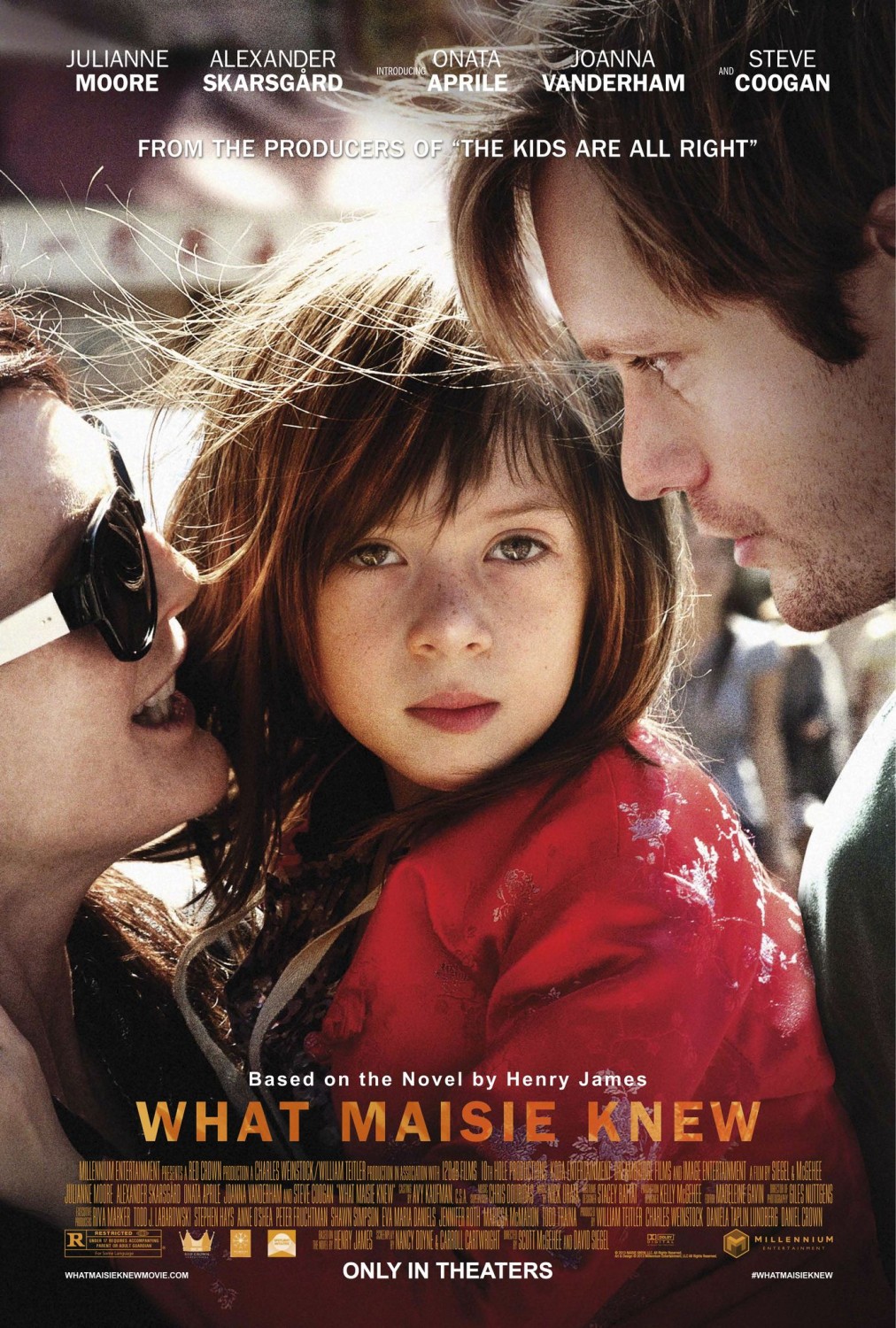