Tackling the darkest of subject matter with humour, Scottish comedy A Practical Guide to a Spectacular Suicide wears its no-budget roots on its sleeve and is all the more charming for it.

The film focuses on Tom Collins (Graeme McGeagh), a young man whose failed attempts at suicide have seen him start a blog offering advice to others who are struggling to take their own lives. But Tom’s last disastrous effort – walking into the sea – saw him charged with breach of the peace and he’s sentenced to community service, helping out crotchety old man Mr. Neilsen (Ray Crofter).

Tom also has to attend therapy sessions, where he meets Eve (Annabel Logan), a quirky girl who is similarly troubled but far more upbeat about it. After hearing all about his botched attempts, she offers to help Tom plot a truly spectacular suicide. Meanwhile their therapist Dr. Watson (Patrick O’Brien) just wants to help Tom get better but masks his concerns beneath thick layers of sarcasm and cynicism.

Finding the right tone in a comedy about such difficult subject matter isn’t easy but director Graham Hughes does a commendable job in keeping things light without specifically making fun of depression or suicide, though the script doesn’t shy away from bold jokes. One scene in particular involves an extremely morbid parody of Art Attack that might shock the more sensitive audience members.

As the plot plays out, it isn’t hard to work out where it’s going to go. The three new people in Tom’s life all provide different avenues for him to learn to make the most of life and overcome the sense that he was put here to die. His interactions with Mr. Neilsen are especially poignant as Tom gets to see someone approaching the end of his life who wishes he had done more, specifically with his daughter with whom he has become estranged over the years.

While Spectacular Suicide is clearly made on a shoestring budget by non-professionals, its ramshackle style is part of the attraction. The film is very busy and as such there’s a hit-or-miss feel with a lot of the jokes but some are inspired. Throughout the film, Tom gives us a rundown of his top five historical suicides with members of the cast playing them out on stage in theatrical sequences that don’t make a lot of sense but are well staged and mostly funny, particularly as the cast appear to be completely befuddled by what’s going on.

Elsewhere, there are some surprisingly impressive animated segments to punctuate the narrative. The standout scene in the film is a cute stop-motion sequence crafted around Tom and Eve as they embark on a beautiful makeshift date in an empty theatre after a visit to a theme park goes awry.

The cast are all generally likeable, particularly the central pairing of McGeagh and Logan who have a sweet and charming relationship despite the script’s reluctance to develop her character beyond quirky love interest. Logan is perfectly charming in the role but it would’ve been nice to see the character allowed a bit more depth.

While Spectacular Suicide is wobbly on a number of technical levels and could excise a number of the weaker gags – the running joke about Dr. Watson’s name doesn’t work and the script goes to the dog-reaction-shot well a few too many times – the film earns enough good will to make the missteps forgivable. Don’t be put off by the title and the gloomy subject matter, this is an uplifting and beguiling film. 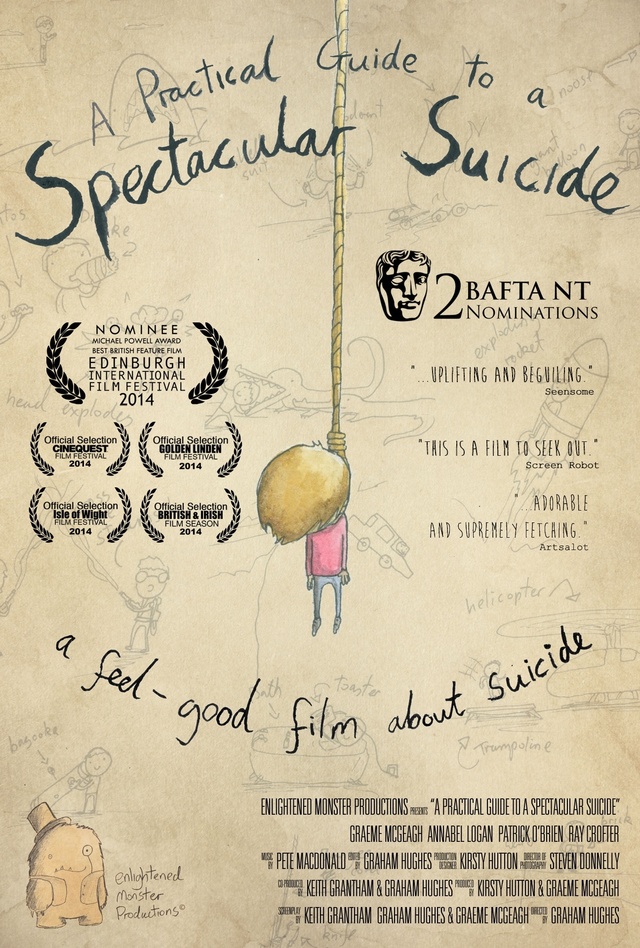