At first glance, Henry Hobson’s Maggie looks like a zombie movie, given that it involves a particularly slow-spreading zombie outbreak. Yet fans of zombie movies will likely be disappointed, as it isn’t really a zombie movie. It also stars Arnold Schwarzenegger, but it certainly isn’t a film that fits into the ‘Arnie Movie’ bracket. So if it isn’t a zombie movie and it isn’t an Arnie movie, just what is it?

Truth be told, it’s a solemn indie film about a family coping with a child who has a terminal illness. The terminal illness just happens to be a zombie virus that Maggie (Abigail Breslin) has caught the old-fashioned way (a bite) and is gradually eating away at her body until the point she becomes a biter herself and must be quarantined.

Quarantine, it’s explained, ends with the patient/zombie being given a cocktail of drugs that leads to a slow and extremely painful death, so Maggie’s father Wade (Schwarzenegger) must decide whether to send her to quarantine or to give her a quicker, less painful death at home. It’s naturally a heart-breaking decision for Wade to make and it hangs over him throughout the film, which Schwarzenegger almost manages to convey in an uncharacteristically quiet, sullen performance.

The ‘Austrian Oak’s performance will no doubt be the big selling point here, with the film destined to become known as “the one where Arnie actually acts” but realistically, it isn’t a great performance. Schwarzenegger is fine, it isn’t a bad performance by any means, but he feels miscast and as such the performance lacks any real emotional punch. Still, it’s an interesting choice from Schwarzenegger and at least shows that late in his career, he’s still interesting in trying something more than trotting out his old catchphrases.

Arnie’s performance aside, there’s enough juice in the premise to keep the film vaguely interesting. The zombie outbreak here appears to be slow spreading and hasn’t fully overrun society in the way it has in other zombie stories. People still seemingly go to work and live their lives, kids even go out together at night like they would in any other American teen movie, riding around in cars and hanging out in the woods. The actual threat of the zombies is very rarely felt, instead the focus is on the virus itself and the effects it has on its carriers than hordes of zombies attacking people at every turn.

First time feature director Hobson shoots the film with the sub-Malickian aesthetic that’s become commonplace in American indies, and the film plays out in long, deliberately paced scenes full of sombre conversations and relentlessly sincere performances. Granted, the subject matter is grim but this is a particularly humourless, po-faced film with no moment of levity to break the brooding atmosphere.

Ultimately, Maggie is a middling, low-fi drama that will intrigue many thanks to Schwarzenegger’s presence but never really delivers on the promise of its premise or the prospect of seeing the former Mr Universe flex his acting muscles. It seems set to be a moving, wrenching drama of a father having to essentially euthanize his child but is missing that real emotional connection, possibly thanks to the performances, possibly the script, maybe both. Either way, it doesn’t hit home the way it perhaps should, and as such, Maggie is more of an interesting misfire than an innovative mix of genres and ideas. 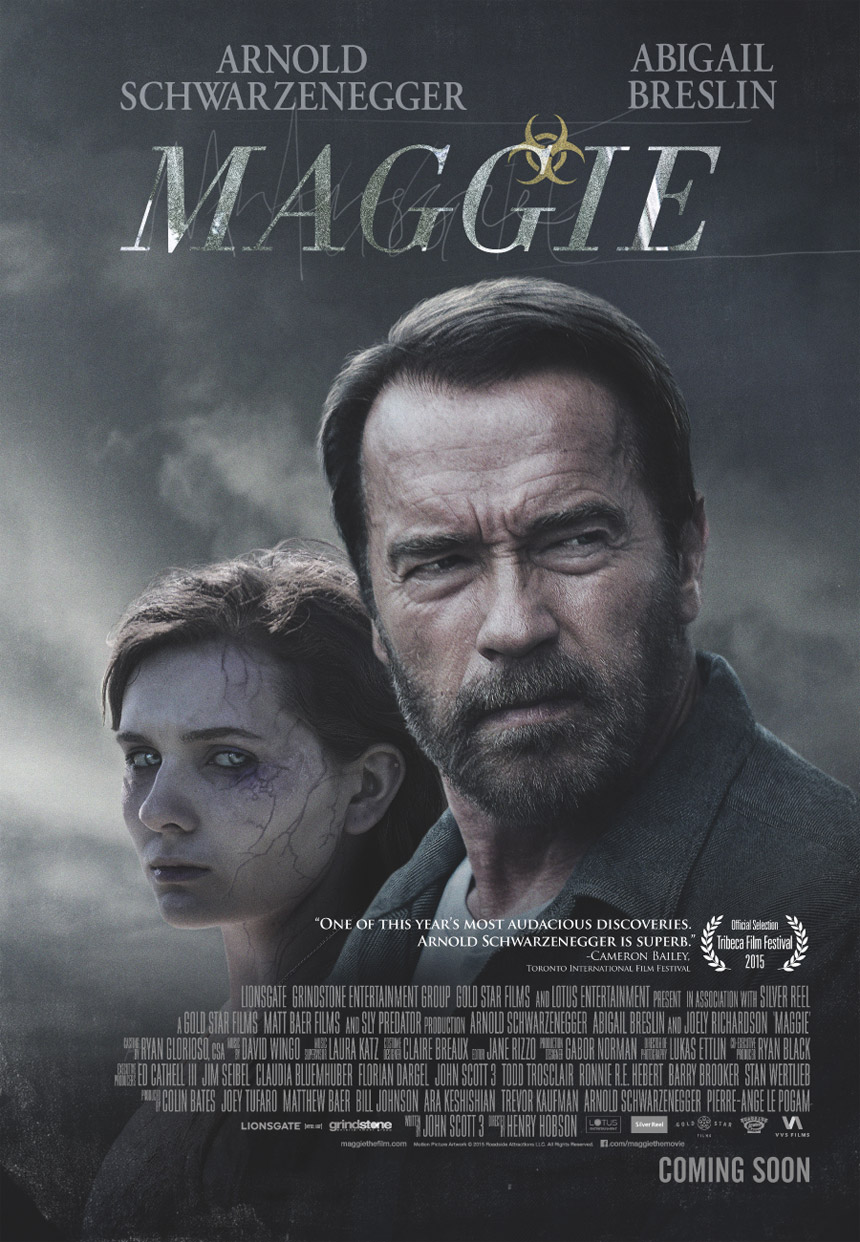