Brit director Nick Love has made a name for himself with tough, gritty and often ridiculous geezer crime flicks like The Football Factory, The Business and Outlaw. With American Hero, he makes the trip across the Atlantic for the first time for a New Orleans-set, found footage superhero flick.

Like a low-budget version of 2008 Will Smith vehicle Hancock, the protagonist here is a very, very reluctant hero. Melvin (Stephen Dorff) has some kind of telekinetic powers but rather than using them for any kind of good, he uses them for scamming the public and impressing girls. He parties all night and wiles away his days with best bud Lucille (Eddie Griffin), a wheelchair-bound veteran. But when the mother of his son denies him access, Melvin decides it’s time to get his shit together and use his powers for good.

Love has admitted that this film is something of an experiment for him and it definitely shows. It starts off like a mockumentary, with characters talking directly to the camera and referencing the fact they’re making a film about Melvin. Then midway through the film, all that stops entirely. It’s still filmed in that found-footage style and Melvin continually looks at the camera but there’s no documentary set up anymore. As a result, the film feels shambolic, with many of the scenes cobbled together into a slightly shonky narrative.

Despite that, American Hero is still a moderately entertaining film, thanks largely to Dorff and Griffin. Dorff is effectively playing himself and appears to have been given free rein to do as he pleases but he’s a compelling presence and shares good chemistry with Griffin, who finds some pathos beneath the wisecracks.

It doesn’t all hang together as a coherent piece of work and the attempt to set up a villain for a big showdown is half-hearted at best, but this is an interesting and intermittently enjoyable film. 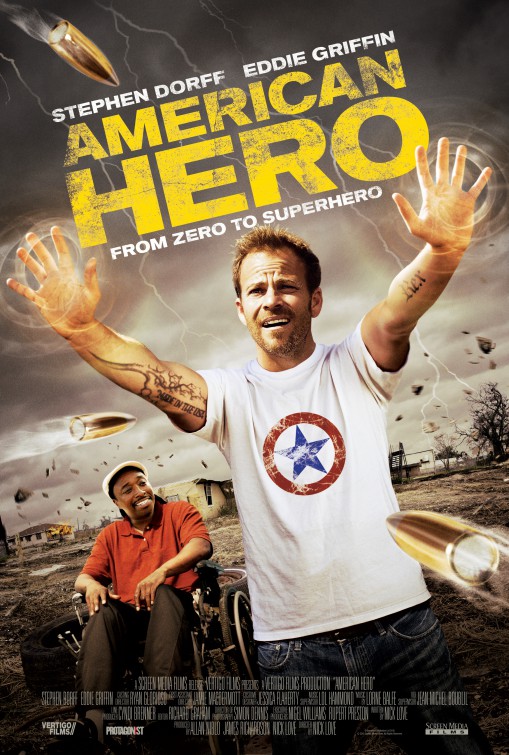