The announcement of a sequel from Pixar always stirs up some mixed emotions. While the prospect of spending time with some beloved characters again, it’s always slightly disappointing to see the studio behind such original works of near-genius as Wall-E and Inside Out go back to the same well again. It doesn’t help that Pixar’s sequel/prequel track record is patchy: the Toy Story series is great but Cars 2 and Monster’s University are no-one’s favourites.

With all of that in mind, you’d be forgiven for approaching their latest, Finding Dory, with a distinct sense of trepidation. The good news is that this sequel to 2003’s fantastic Finding Nemo is a lot closer to the Toy Story end of the spectrum, proving a worthy belated follow-up. Of course, dipping us back into the wonderful underwater world that father and son Marlin and Nemo (Albert Brooks and Hayden Rolence) and forgetful tang fish Dory (Ellen DeGeneres) inhabit is lacking the thrill of a fresh Pixar concept. But returning director Andrew Stanton and his co-director Angus MacLane do a good job of working within the basic template of the first film and enlivening it with charming new characters and enjoyable detours.

This time around, as the title suggests, it’s Dory who goes missing. Flashbacks show a young Dory – one of Pixar’s most adorable creations – being schooled on how to handle her short-term memory loss by her doting parents (Diane Keaton and Eugene Levy). We know at some point they are separated and Dory, of course, can’t remember how it happened or where she can find them. When a knock on the head gives her a vital memory that points to their location, she sets off on a quest to find them. This in turn leaves Marlin and Nemo trying to find Dory and bring her back to safety.

Dory’s journey leads her to the Monterrey Marine Life Institute, a location full of new challenges and dangers for our fishy protagonist, whether it be the handsy kids, clunky machinery or labyrinthine drain pipes. There she finds a gang of new allies: whale shark Destiny (Kaitlin Olson), beluga whale Bailey (Ty Burrell) and grouchy octopus Hank (Ed O’Neill). They all help Dory in her attempts to get out of the marine institute, while on the outside, Marlin and Nemo are trying to get in, enlisting the help of a couple of cockney sea lions (Idris Elba and Dominic West) and a loyal loon bird named Becky. All of these new characters are as delightful as we have come to expect from Pixar over the years.

Stanton and MacLane keep the action moving quickly throughout, flowing seamlessly from heartfelt character moments to breakneck action sequences, big comic set pieces and back again. There is of course a deeper examination of Dory’s character this time around and the film lends more shade and nuance to the character and, more specifically, her disability. Dory’s memory loss was primarily a joke in Finding Nemo and it is often played for laughs here too but over the course of the film, both Dory and her friends learn to appreciate her way of thinking as a help rather than a hindrance and she finds a deeper level of acceptance. The best part of this message of inclusion is the way the film manages to convey it without ever beating you over the head with it the way something like Zootopia – a fantastic film in many ways – did earlier this year.

While it’s a little too derivative to truly compete with Pixar’s very best, Finding Dory is a beguiling effort that encapsulates so many of the studio’s biggest strengths and is successful in drawing both warm tears and hearty belly laughs. 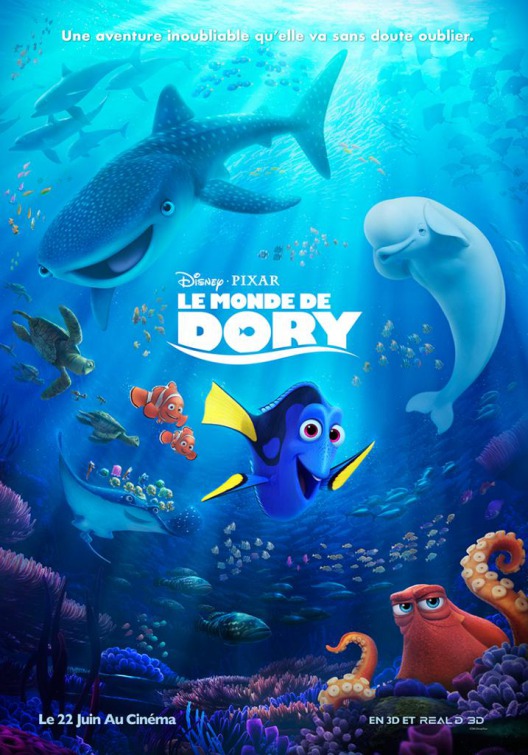