In apartheid-era South Africa, where unprecedented numbers of people were executed, the hangmen were both shepherds and butchers, caring for the prisoners one day and pulling the lever the next. The mental toll that can take on a person is at the centre of Shepherds and Butchers, the new courtroom drama from South African helmer Oliver Schmitz.

The film opens on 17-year old Leon Labuschagne (Garion Dowds) running a van off the road before shooting the seven men inside it. It’s a bold opening that throws us right into the plot and, interestingly for a courtroom drama, shows us the full details of the incident before any legal proceedings begin. But this isn’t about whether Leon is guilty or not – he definitely is – it’s about the events that took him to breaking point and caused him to murder.

Arguing that the extreme emotional and psychological toll placed on Leon at work on a daily basis lead to some form of post-traumatic stress disorder, human rights lawyer Johan Webber (Steve Coogan) uses the case as a means to hit out against capital punishment. Opposing him, is fierce prosecutor Kathleen Marais (Andrea Riseborough). She has to argue on behalf of the victims’ families first and foremost but eventually the state too, thanks to Webber’s ulterior motives.

The discussion at the centre of Shepherds and Butchers is definitely worthwhile and what it does best is establish the real horrors of the executions. Schmitz applies a real visceral style to the scenes of the men being hanged, shooting everything in close up and focusing on the small details. But it’s the sounds that are most horrifying, form the loud clack of the trap door and the snap of the men’s necks to the splattering as the contents of the men’s bowels hit the floor. It’s grim and powerful, sticking with you long after the film has ended.

Unfortunately, the rest of the film doesn’t have quite the same power. The flashbacks to Leon’s life before his crime are intercut with the court room scenes that make up the bulk of the film and most of these scenes fall flat. It could be the performances, with Dowds’ performance as Leon proving impenetrable, failing to communicate how the character actually feels about anything that’s going on. Coogan makes the wise decision of adopting a subtle-non-existant South African accent but his performance is uncharacteristically stiff, not really conveying the character’s righteous indignation. The pick of the cast is Andrea Riseborough who is given very little to do but acquits herself well, nailing the accent in the process.

The subject matter here is obviously worth exploring and shining a light on, and the film raises issues around capital punishment and specifically the humans charged with carrying it out. Shepherds and Butchers definitely has its heart in the right place but the dry, functional feel of the courtroom scenes gives the film the feel of an issue-of-the-week TV movie, lacking the style and conviction of its execution scenes. A commendable film but not a remarkable one. 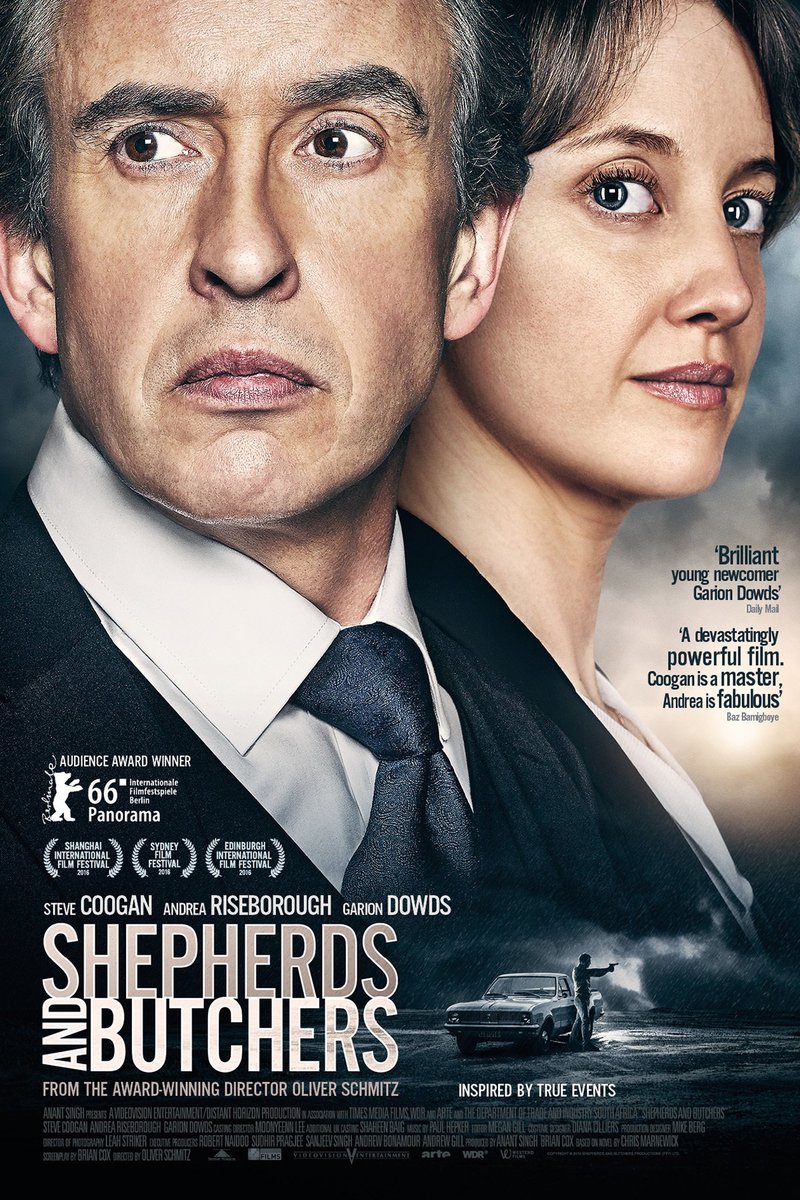