Set to be released on Netflix after a run of festival screenings, Rob Burnett’s The Fundamentals of Caring is a warm and hilarious road trip comedy centring on a young disabled man and his new caregiver. Considering they are played by Craig Roberts and Paul Rudd respectively, it’s no surprise that both are completely loveable and the film is a delight, thanks in large part to their chemistry.

Rudd plays Ben, a depressed man going through a bitter divorce and reeling from a devastating personal tragedy. He decides to train as a caregiver and the first available job is taking care of Trevor (Roberts), a horny teenager with an acerbic wit and a rare form of muscular dystrophy. Trevor has had a rough record with carers, his mother Elsa (Jennifer Ehle) explains, but he takes to Ben and the two bond quickly, as they poke fun at each other for numerous things, particularly Trevor’s disability and Ben’s faltering career prospects: “The state pays you $9 an hour to wipe my ass”, Trevor is quick to remind Ben.

Roberts and Rudd have an excellent rapport and any scene where they’re on screen together is fantastic. Rudd is one of the most likeable actors around so his presence alone makes you instantly root for Ben and buy into his personal issues. Roberts, the young Welshman who broke out with Submarine and has since landed a few supporting roles in US comedies, plays Trevor as a bitter kid who has isolated himself and puts up a snarky front as a defence mechanism.

The early scenes between the two are great but the film gets even better once the two guys hit the road, in an attempt to broaden Trevor’s horizons. Because of his disability, Trevor has locked himself away in his mother’s house and sticks to the same rigid routine every day, most of which involves watching TV and eating waffles. When Ben discovers Trevor’s love of sad roadside attractions – the world’s deepest pit being a particular highlight – he takes his young charge on a trip of these various bizarre attractions. It isn’t easy – Trevor needs copious amounts of medication and machines to aid him in his sleep – but Ben makes it happen and the film really hits its stride.

Their road trip banter and highway detours are the film’s funniest scenes purely because of the comedic talents of these two actors. Rudd in particular manages to take a throwaway line about a Slim Jim and turn it into a hilariously funny improv session that only he could pull off. Trevor’s penchant for pranking Ben by faking serious health issues also leads to some brilliant comedic moments.

When the film falters is when this dynamic is interrupted by the arrival of two new characters. The first isn’t so bad as the two guys pick up Dot, a surly teenage drifter played by a miscast Selena Gomez. She provides a love interest for Trevor but also has her own arc involving her estranged father that comes to a sweet conclusion, though never feels entirely necessary. The other tag along is Peaches (Megan Ferguson), a heavily pregnant woman the gang find broken down by the side of the road. Her whole purpose seems to be to provide some kind of redemption for Ben and since she’s pregnant, it’s pretty clear from the moment she appears on screen how that’ll play out. Ferguson’s ditsy performance is fine but the character is completely superfluous and detracts from the central relationship at crucial moments.

The introduction of those characters leads to a third act that’s more complicated and contrived than it ever needed to be but nonetheless, The Fundamentals of Caring is a film that hits the heart and the funny bone in equal measure thanks to its two hilarious leading men. 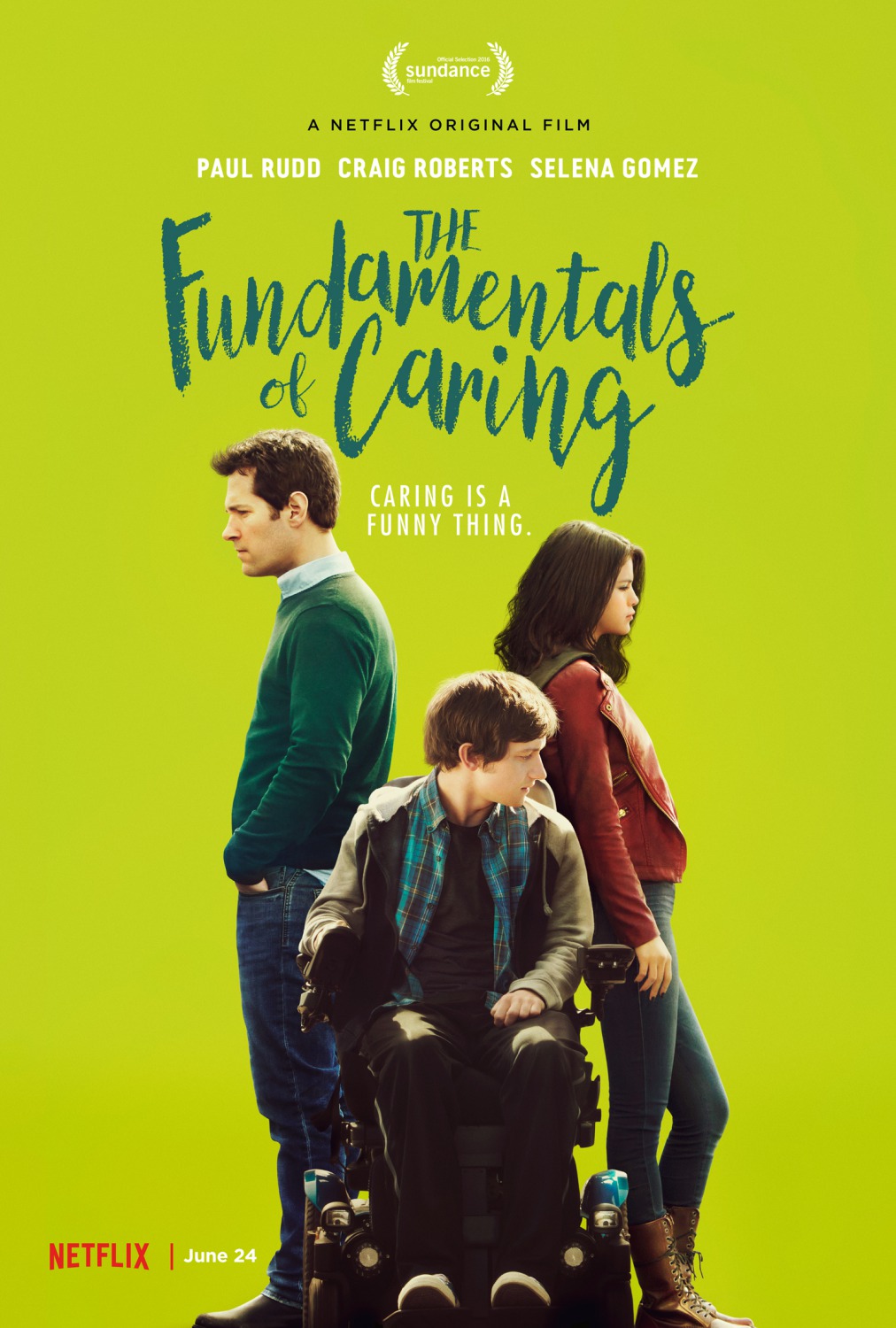