Yoga Hosers marks the second film in writer-director Kevin Smith’s True North trilogy, three loosely connected films that began with 2013’s Tusk and will end with Moose Jaws next year. The series sees Smith return to the kind of small scale, low budget and extremely personal filmmaking that he made his name with in the 90s and while the result is uneven and definitely not for everyone, there’s something infectious about the personal and somewhat ramshackle nature of the film.

The film focuses on Colleen and Colleen, the two teenage store clerks who cameoed in Tusk, as played by Smith’s daughter Harley Quinn Smith and Johnny Depp’s daughter Lily-Rose Depp. While their appearance in Tusk was brief, this film fleshes out their world, showing the daily grind of high school and late shifts at the convenience store, only broken up by the occasional band practice and yoga lessons with copyright-defying teacher Yogi Bayer (Justin Long).

Things get a lot more exciting for the girls when they have to team up with famous man hunter Guy Lapointe (Johnny Depp) to stop an army of small Nazi bratwurst – Bratzis – who have been murdering locals. Yes, that’s actually the plot: fascist sausages killing people, via rectal entry no less, and yes, it is as insane as it sounds. It’s also very funny for the most part as these mini sausage people – all played by Smith himself – rampage around the convenience store spouting Nazi propaganda in a vaguely German accent. The effects throughout are ropey but the shonky CG that brings the creatures to life only adds to the retro feel that the film has going for it. This very much feels like a throwback to the creature-based horror comedies of the 80s; the likes of Gremlins and Critters were no doubt a touchstone here.

As much as the personal nature of the film generally works in its favour, there are times where ‘personal’ tips over into ‘self-indulgent’. Of course, casting your daughter and her friend in the lead roles is indulgent right off the bat but Smith and Depp are both very natural in their roles, showing an easy chemistry together. Beyond that though, there are scenes where the film grinds to a halt to show off, for example, Depp’s ability to sing in fluent French or Ralph Garman’s talent for celebrity impressions. Though both are undoubtedly impressive, and in Garman’s case quite funny, they stick out a mile and hamper the momentum and energy the film has going for it.

One of the comedic highlights of the film is actually Johnny Depp – an actor who personifies self-indulgence – reprising his role as Lapointe, who also appeared in Tusk. His accent is ludicrous and he once again dons a pile of prosthetics, capped off by a massive nose, but it somehow works. He is used relatively sparely, which is a wise move, but the hefty sprinkling of moles on his face that change in number and position from scene to scene is funnier than any of the film’s cheap shots at Canadian clichés.

For fans looking for something akin to Smith’s hyper-verbal, potty-mouthed slacker comedies, Yoga Hosers will no doubt disappoint. But anyone willing to follow Smith to the weird places he’s currently going – basing films on a walrus man, Nazi meat products and a killer moose – then there’s a lot here to enjoy. 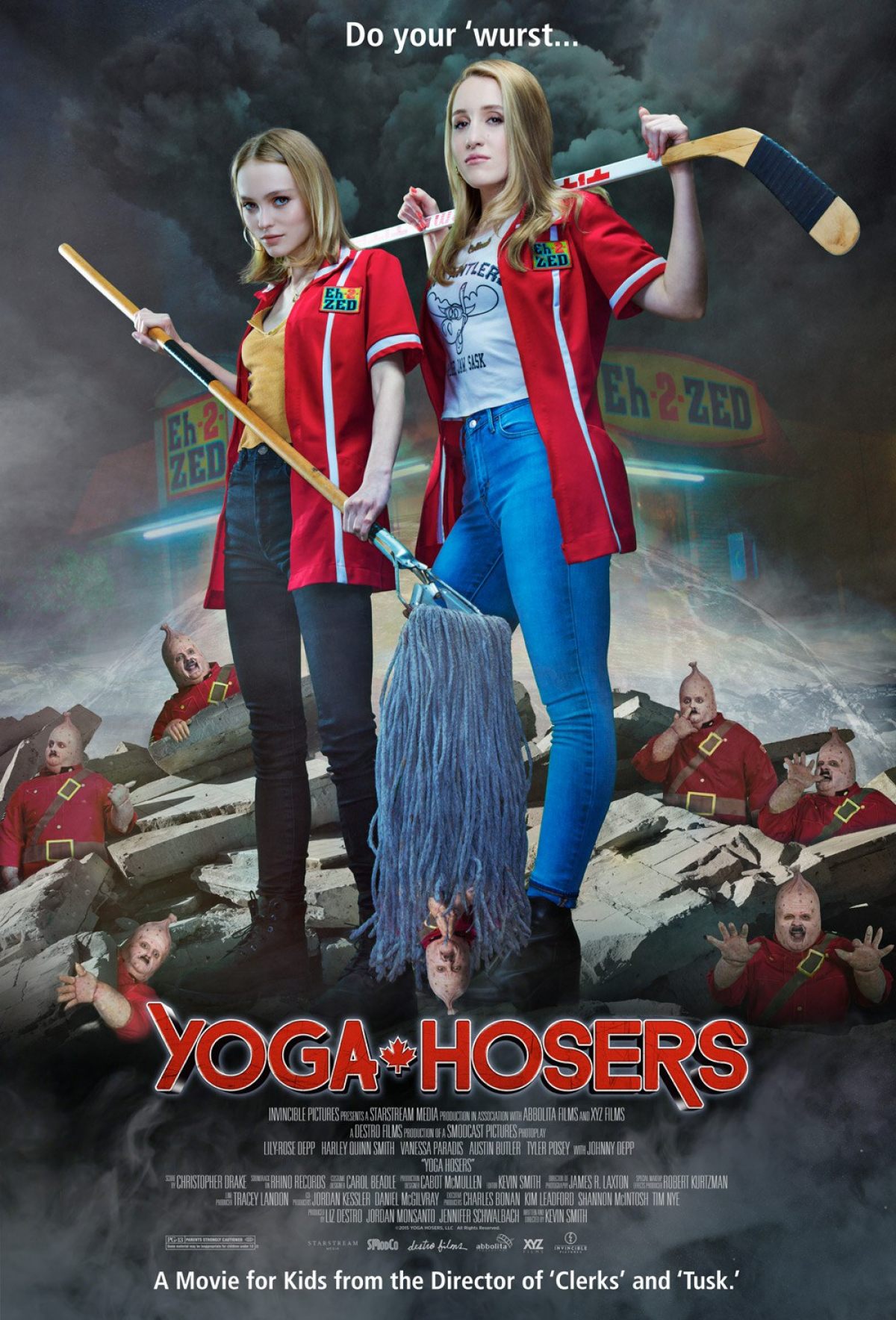