After taking the zombie genre and turning it into a melancholy relationship flick with his directorial debut Life After Beth, writer-director Jeff Baena turns his focus to 14th century Italy with The Little Hours. Based on one of the tales from The Decameron, Giovanni Boccaccio’s 1886 collection of novellas, Baena takes the unlikely step of turning this material into an offbeat and raunchy comedy – and somehow he pulls it off.

Set in a convent in rural Italy, the film focuses on three young nuns: Alessandra (Alison Brie), Fernanda (Aubrey Plaza) and Genevra (Kate Micucci). Their mundane lives of praying and cleaning are shaken up by the arrival of a handsome new handyman named Massetto (Dave Franco), who ignites the barely repressed desires of the young nuns. He’s on the run after being caught sleeping with the wife of his cruel, violent master, Lord Bruno (Nick Offerman). The kindly drunkard Father Tommasso (John C Reilly) takes him in but insists he pretend to be a deaf mute to avoid any issues with the girls.

Baena’s decision to play this material as a bawdy comedy is inspired, finding laughs from the off in the contrast between the period setting and the modern, sweary vernacular. The first time Plaza barks a series of expletives at the simple gardener in the film’s opening minutes, it’s surprising and hilarious, and that level of unpredictability runs from scene to scene. As it develops, the film inevitably becomes a sex farce as the three nuns – for differing reasons – try to bed Massetto and the secrets, misunderstandings and surprise reveals begin to pile up.

Crucial in selling this particular type of high camp material is a cast that’s fully committed to it and Baena has assembled a who’s-who of comedy’s biggest talents. Brie is perfectly cast as the most innocent of the nuns who is immediately corrupted as soon as she claps eyes on a potential suitor. Plaza is at her eye-rolling, foul-mouthed best and Micucci eventually breaks free of her mousy persona to go all out in a fearless, unhinged performance that threatens to steal the whole movie. The likes of Nick Offerman, Fred Armisen, Molly Shannon and Adam Pally are all on hand to wring laughs from smaller roles.

As The Little Hours reaches its third act, it starts to descend into chaos and the laughs start to wear a little thin. While it touches on themes of repression and resisting basic human desires like freedom, sex and even love – particularly in the name of faith – the film never really explores this to any great degree. It would be unfair to criticise a comedy for ‘only’ being funny, but once the laughs start to wane in the latter third, there isn’t much else to chew on here. Luckily, Baena and his brilliant cast earn enough good will in the riotous first two-thirds to allow for any later missteps. 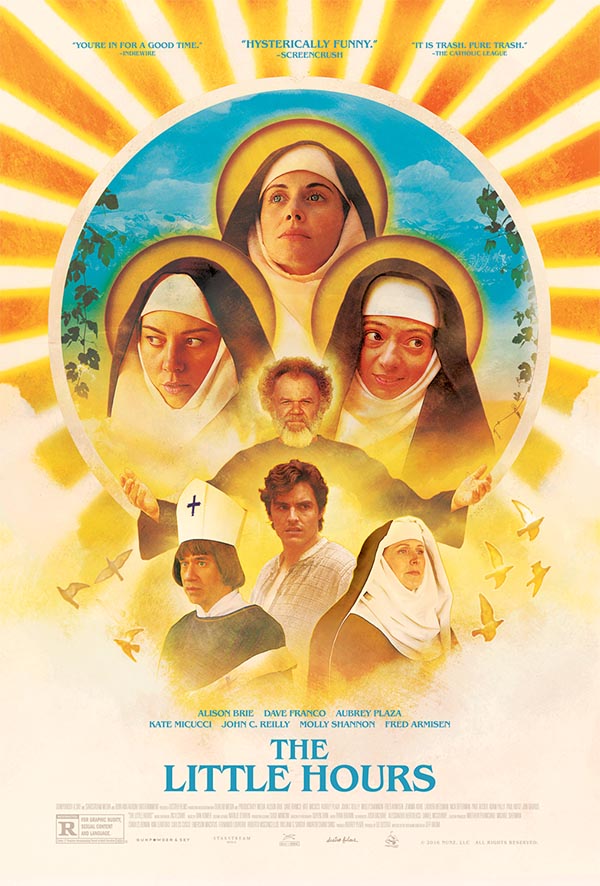