Rising above the usual indie dramedy fare that flows forth from American film festivals like Sundance and South by Southwest year-on-year on shear warmth and likeability is Brett Haley’s wonderful new film Hearts Beat Loud. With its sincerity, charm and musical backdrop, the film is a crowd-pleaser in the John Carney mould, offering up both characters and pop tunes that are irresistible.

The songs come from father and daughter pairing Frank and Sam Fisher, played with utmost likeability by Nick Offerman and Kiersey Clemons respectively. Frank, a single parent after Sam’s mother died in a bicycle accident, runs a record store in Red Hook that’s on the brink of closure after his landlord, Leslie (Toni Collette), reluctantly hikes the rent prices. Sam, meanwhile, is only weeks away from moving to the other side of the country to study pre-med at UCLA, leaving behind both her father and her new girlfriend Rose (Sasha Lane).

Before she goes however, sometime-musician Frank is going to make sure they get in a few more jam sessions. One of those jam sessions inadvertently leads to a good song – the title track, Hearts Beat Loud – and, against Sam’s wishes, Frank uploads the track to Spotify. Before long, it winds up on a popular playlist and the father-daughter act – dubbed We Are Not a Band – are catching the attention of record labels.

Thankfully the film doesn’t go too far in its exploration of where the band can go – there’s no world tour or best selling album here. This isn’t the story of a successful pop act, rather the story of a father and daughter finding a way to connect and to express themselves, as much to as each other as anyone else. Through some genuinely catchy and affecting songs, written by Keegan DeWitt, they deal with the various issues in their lives – Sam’s relationship, the closure of the shop, the loss of Sam’s mother.

Though Frank encouraging Sam to shelf her school plans to give the band a real shot adds a welcome wrinkle of complexity to their relationship, the love between the two is evident and there’s something joyful about watching such a lovely and supportive familial relationship play out on screen. Similarly joyful is Sam’s romance with Rose, a blossoming relationship that’s sweet and loving, despite the unfortunate time limit.

Each actor here imbues their character with a decency and likeability, with Offerman – in his best film performance to date – ditching his usual stern masculinity and finding a more playful energy as a man who hasn’t quite let go of his youth, even as his daughter is moving on with her life and both the neighbourhood and music industry have left his store behind.  Clemons, meanwhile, is luminous; a beguiling screen presence getting a chance at a meatier role after supporting turns in the likes of Dope and Bad Neighbours 2, and proving herself more than capable.

Though Hearts Beat Loud doesn’t do anything particularly new or ambitious, it’s the kind of film that draws both laughter and warm tears, and makes you genuinely care for its characters and root for them to succeed. It’s a small gem of a film; earnest, poignant and full of heart. 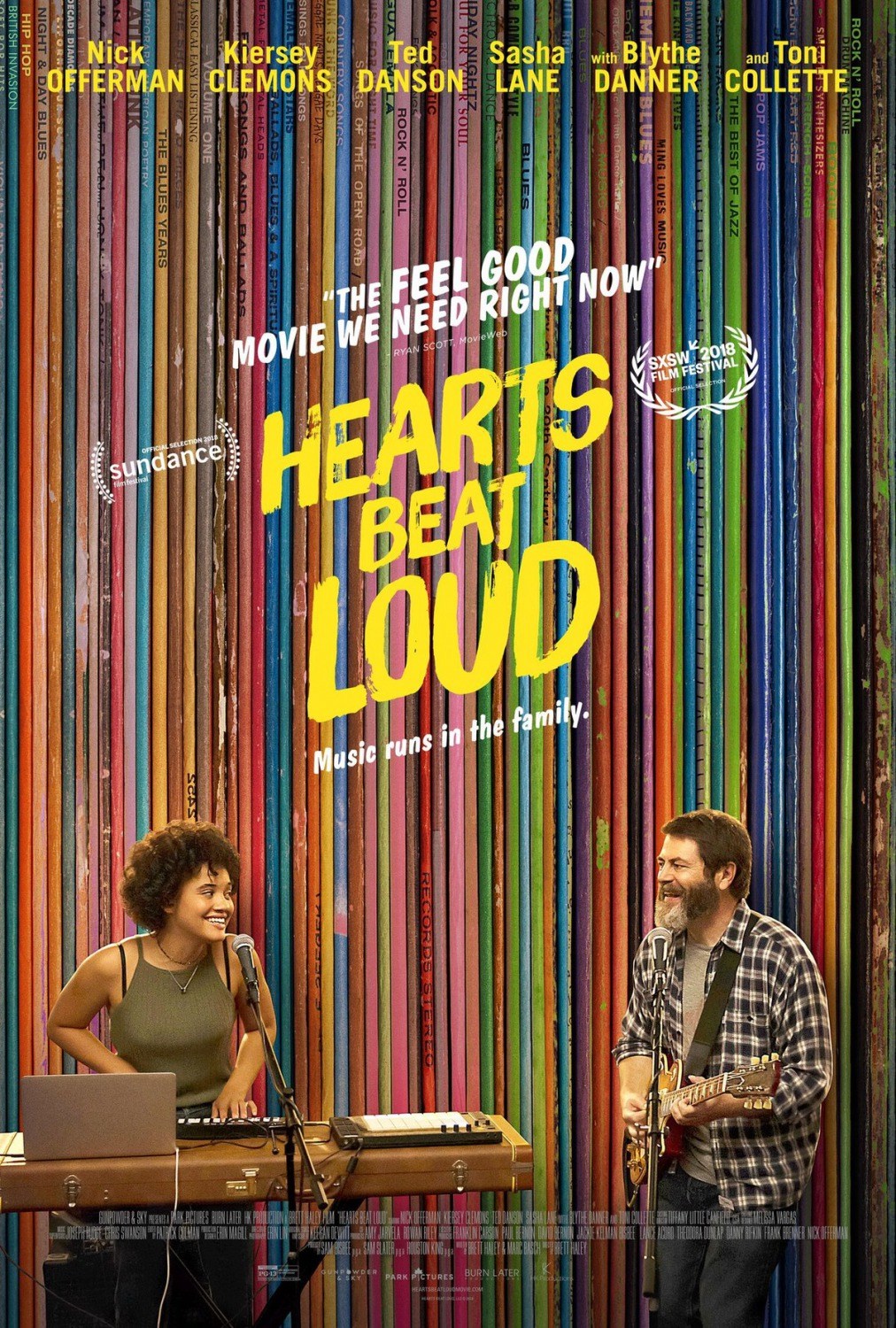