Considering Pixar’s recent reliance on sequels that has seen them follow up on the likes of Monsters Inc, Finding Nemo and Cars, it’s surprising that it has taken them this long to revisit The Incredibles. Since that film’s release in 2004, comic book movies have become the biggest properties in Hollywood, so Brad Bird’s Incredibles 2 feels long overdue. This isn’t just a cash-in sequel riding the superhero wave though; this is every bit as nuanced, inventive, smart and funny as you’ve come to expect from Pixar.

The film rejoins the Parr family – Mr Incredible (Craig T Nelson), Elastigirl (Holly Hunter), Violet (Sarah Vowell), Dash (Huck Milner) and baby Jack Jack – precisely where the last film left off: in the midst of battle. The fallout from this particular battle sends the outlawed superheroes into a life of non-super mundanity, until the intervention of a pair of wealthy siblings named Winston (Bob Odenkirk) and Evelyn Deavor (Catherine Keener). The Deavors want to legalise superheroes and enlist The Incredibles to be the face of their new campaign, particularly Elastigirl, whose style of superheroics aren’t as bombastic as her husband’s.

So while Elastigirl is out trying to track down a tech-savvy terrorist named Screenslaver, Mr Incredible is left at home to look after the kids, including baby Jack Jack, who is starting to discover powers of his own. The set-up is pure sitcom, and an old-fashioned one at that, as the burly man of the house has to get domestic, but the portrayal of the exhausting daily grind of parenthood will ring true for many. All the super-strength in the world can’t help Mr Incredible when Violet comes home with boy troubles or Jack Jack throws a tantrum, especially when those tantrums involve fire, laser-eyes and teleportation.

While Mr Incredible is playing Mr Mom, Elastgirl gets the bulk of the action, and the set pieces here live up to the standard set by the first film. Free from the constraints of live action filmmaking – which Bird branched into with the excellent Mission: Impossible – Ghost Protocol and the not-so excellent Tomorrowland – Bird is at his best here, crafting wonderfully vibrant, kinetic action scenes that whizz by at a clip but never become incoherent, incorporating humour and character along the way. The advancement in technology in the past fourteen years means all of this action is rendered in a way that it simply couldn’t have been when the first film made it to screens, though Bird retains the colourful retro-futurism that gave his original such a timeless feel. The real leap forward comes in the character animation, allowing for much more expression, which complements the excellent voice performances, whether it be Hunter’s southern pep or Nelson’s weary earnestness.

It’s rare for any sequel to match the original, especially after such a vast period of time but with Incredibles 2, Brad Bird and co have done just that. It succeeds as both a delightful Pixar family film and a dazzling superhero action film, seamlessly weaving universal themes of parenthood, work-life balance, mid-life crises and our slavish addiction to screens into a slick, fast-paced blockbuster. The comic timing, inventiveness of action and clearly-drawn, well-developed characters put many of the film’s comic book contemporaries to shame, and provides a breezy – but not flimsy – alternative to some of the heavier blockbuster fare that dominates the summer movie season. 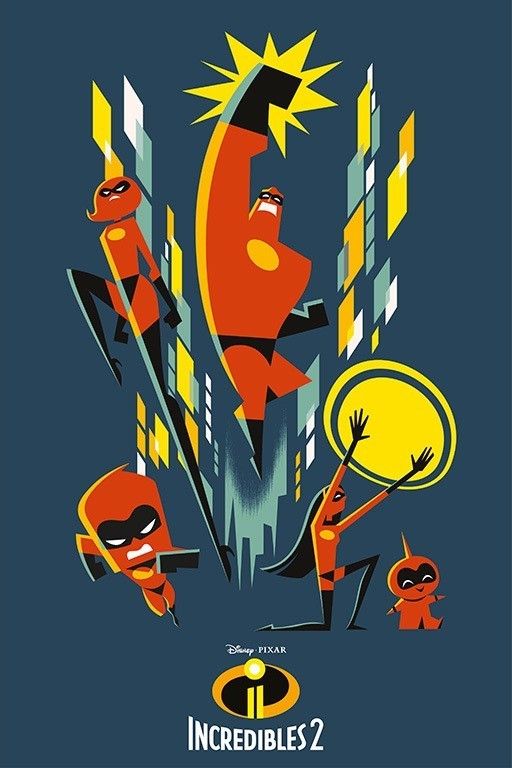