Opening this year’s Edinburgh International Film Festival is Marc Turtletaub’s Puzzle, a broad crowd-pleaser that’s elevated by an excellent Kelly Macdonald performance. Though the film treads a lot of familiar ground and is a largely predictable affair, the script – by Oren Movermen – treats its characters with an honesty and a warmth that is hard not to be won over by.

Macdonald stars as Agnes, a suburban housewife who has dedicated her life to caring for her husband, Louie (David Denman) and their two teenage sons, Gabe (Austin Abrams) and Ziggy (Bubba Weiler). Her routine is so set in stone that she lies in bed every morning counting down to her alarm going off, and knows exactly what Louie is going to say when she wakes him up.

But when she is gifted a jigsaw on her birthday, Agnes discovers she has a talent for puzzles. She puts the jigsaw together quickly, then dismantles it and does it again even quicker. The hunt for more puzzles leads her to a jigsaw shop in Manhattan, where she sees an ad from a puzzle champion looking for a doubles partner. This is how she meets Robert (Irrfan Khan), a wealthy and charming inventor who is immediately taken with Agnes, and not just for her puzzling abilities.

Agnes and Robert initially bond over puzzles, with Movermen’s script  – adapted from an Argentinian film of the same name – giving Khan a few too many overwritten monologues about puzzles focusing chaotic minds. But their relationship quickly deepens, with Robert seeing Agnes for more than just the housewife and mother that she is to everyone else. This awakens something in Agnes and she begins to break from her routine, which starts to bring the simmering resentments in her family to the surface. There’s a lovely chemistry between Macdonald and Khan that makes this slightly contrived relationship believable, as Agnes comes to life around the charming and warm Robert.

Though you can generally see where things are headed early on, the characters here are deceptively complex and the film never makes it as simple as it might’ve been to root for Agnes. Though our sympathies are with her – and Macdonald is, of course, as likeable as ever – Agnes doesn’t always do the decent thing. Similarly, her husband – played well by The Office’s Denman – isn’t a bad guy by any means and we can see where his frustrations come from. Sure, he maybe takes Agnes for granted sometimes but we see him as a loving husband and a tough but hard-working father who is undoubtedly flawed but a sympathetic character nonetheless.

As a portrait of a woman finding a way to express herself and break out of the mundanity of her daily life, Puzzle is broad for sure but is also effective and at times genuinely moving. Macdonald is brilliant here, finding numerous shades to a character that could’ve been one note, charting the gradual awakening of a woman who only knew one way of life, but is suddenly seeing a few more possibilities ahead of her. Who knew jigsaws were quite so powerful? 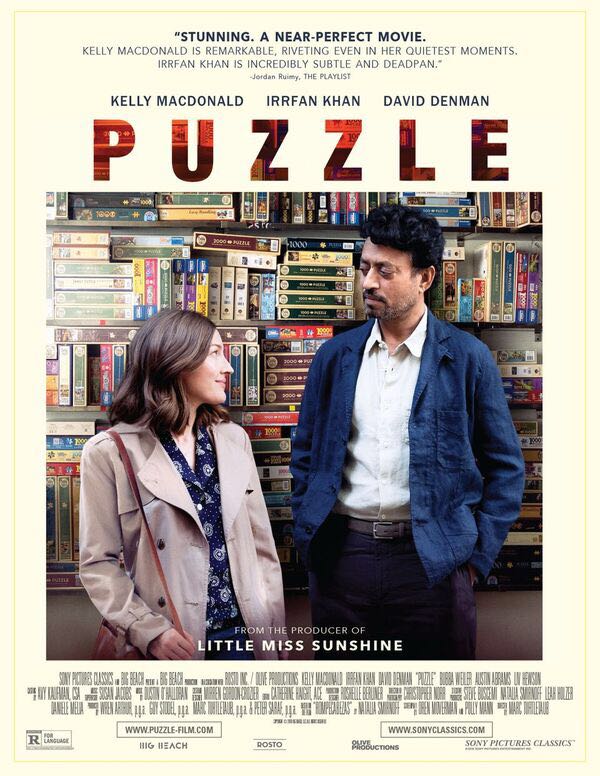