Setting an entire film inside screens – laptops, phones, tablets – is not an entirely new conceit, with the likes of Unfriended and Open Windows already exploiting that premise. Perhaps the best use of this approach so far however is writer/director Aneesh Chaganty’s debut feature Searching, a moving and wildly entertaining thriller about a desperate father trying to find his missing daughter.

John Cho stars as David Kim, a single father still reeling from the loss of his wife, to cancer, a few years ago. His daughter is Margot (Michelle La), a sixteen-year-old who, like most teenagers, lives her life online. When Margot mysteriously disappears after a study group one night, an investigation is launched into her whereabouts, which leads David into her digital life, where he discovers a lot about his daughter that he didn’t know.

All of this is told through a variety of different screens, starting on David’s laptop as he idly chats to his daughter and chastises her for not taking the trash out. Soon it shifts to Margot’s laptop as David investigates her various social channels, and the film makes brilliant use of Facebook, Tumblr, Instagram and Facetime to really develop these characters. We see old vlogs of Margot’s that serve as a way to deliver clues to David but also give us an insight into the character and similarly, old home movies efficiently fill in a lot of backstory for this family.

On a technical level, there’s an incredible attention to detail that grounds the film in real life: all of the sites – barring one vlogging platform – that David and Margot use are real and the way the characters use them is the way they conceivably would were they real people. Everything looks and sounds and feels authentic, which is crucial to this conceit working. The use of real technology is often so clunky and devoid of authenticity, so to see it used in a way that rings completely true is refreshing.

Of course, that attention to detail would all be for nothing if it wasn’t in support of something worthwhile and Searching presents real, grounded characters that are thrust into a nightmare situation that develops in an organic way. The central mystery is compelling and the family drama around it is often genuinely moving to the point that it’s easy to forgive the film when the plot begins to rely too heavily on contrivances and coincidences. Chaganty has crafted a smartly written and inventive thriller that achieves so much through so little, turning the familiar look of a laptop screen into something truly cinematic. 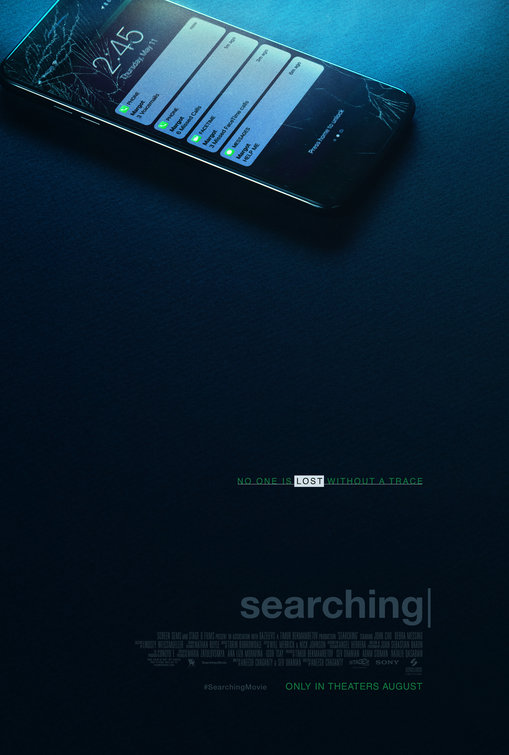