After the majestic one-two punch of Before Midnight, the third entry in one of cinema’s best trilogies, and the ambitious, 12-year-in-the-making Boyhood, soulful Texan auteur Richard Linklater deserves to kick back a little. Enter Everybody Wants Some, a laidback and warmly nostalgic reimagining of Linklater’s own days as a college baseball player set in the summer of 1980.

Linklater has labelled the film a “spiritual sequel” to his 1993 coming-of-age classic Dazed and Confused and that makes sense: the film has a similarly loose and freewheeling vibe, unburdened by the need for plot or conflict. We just spend time with the characters and follow them as they pursue the standard interests of college bros: getting wasted and chasing chicks. But this being a Linklater film, there’s a bit more to these characters than that and we discover it through typically lengthy, rambling conversations.

The audience surrogate here is Jake (Blake Jenner), a sweet-natured freshman pitcher on his first day at college. Like everyone else in the team, he was a star in high school but now he’s the newbie getting hazed by the older guys on the team, like macho team captain McReynolds (Tyler Hoechlin) and smooth ladies’ man Finnegan (Will Brittain). Jake and the rest of the team – including team stoner Willoughby (Wyatt Russell), good ol’ boy Beuter (Will Brittain) and resident weirdo Jay (Juston Street) – live in a couple of big houses off campus and Linklater perfectly captures that testosterone-fuelled group dynamic.

The team spend their days shooting the breeze, ragging on each other and finding new ways to one-up each other, whether it be an intense game of ‘knuckles’ or a hotly contested ping pong match. At night, they party, and they’re pretty indiscriminate about how and where. Their ultimate goal is to pick up girls and it doesn’t matter whether they do that at the local disco club, at a Country-Western hoedown or moshing at a punk gig. They even slip into an art-school party after Jake strikes up a sweet romance with witty, charming theatre kid Beverley (Zoey Deutch).

The prospect of hanging out with a bunch of dude-bros for the best part of two hours might initially sound unappealing but there’s something innocent about the base pursuits of these guys; they never come off like the sleazy, “no means yes” frat boys we see all too often today. Linklater has a clear affection for both the time period and the characters that creates a feeling of nostalgia for a time and place that you may never have been anywhere near.

But Linklater is a smart filmmaker and beneath the hard-partying and male bravado, he dissects the idea of image and perception, and looks at what really defines these young guys who, on the surface, are defined by their jock status or by the music they listen to or the way they dress. These characters are still trying to find who they really are and who they’re going to be, after college, after their baseball careers falter. Though they haven’t sussed who they are yet, Linklater gives us plenty of insight – as is often his way – via tangential ramblings, seemingly simple exchanges that add up to something a lot more poignant and big moments disguised as small moments. It’s telling that the gang go to a theatre party: Linklater himself began his college years as a baseball player but ultimately found a career in the arts.

From Dazed and Confused to the Before… trilogy and Boyhood, Linklater has always been a master of capturing a moment; a specific snapshot of a time in life that maybe didn’t feel like it at the time but in retrospect was a formative, defining experience. The kids in Everybody Wants Some aren’t thinking about how finite their time as hotshot college athletes really is, they’re just living the moment and Linklater invites us to live it with them. 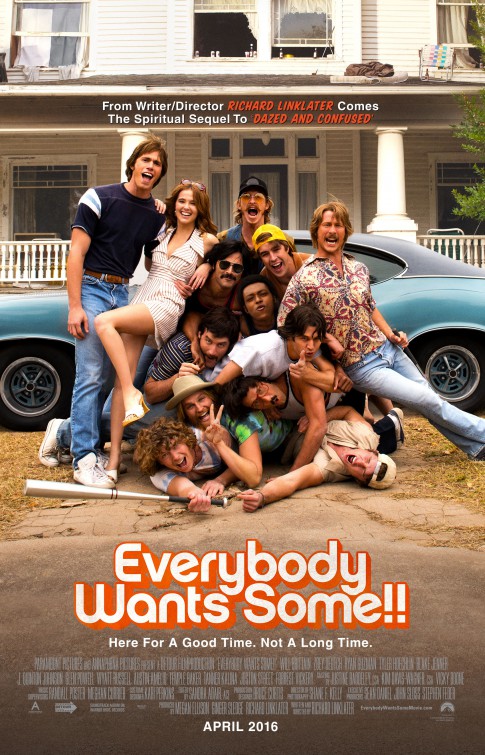