If you’re a sci-fi or comic book fan, or have been following the Marvel Cinematic Universe in recent years, you’ll be familiar with the concept of a multiverse – the idea that there are infinite planes of existence where alternate versions of ourselves could be living different lives. In cinema, it’s a handy conceit that allows for all kinds of hijinks, like bringing numerous Spider-Men to the screen or merging various lines of X-Men-related continuity. For Daniels – the filmmaking duo responsible for the sweet, puerile fable Swiss Army Man – the multiverse is a means to explore existentialism, family drama and absurdist toilet humour in Everything Everywhere All At Once, a boundlessly creative but overstuffed comedy-action-sci-fi-drama.

The film centres on Evelyn (Michelle Yeoh), a bored laundromat owner trapped in a loveless marriage with Waymond (Ke Huy Quan) and at odds with her gay teenage daughter, Joy (Stephanie Hsu). This mundane existence is soon upended when Evelyn is visited by a version of Waymond from a different universe – a smooth, secret agent type, a million miles from the milquetoast sap Evelyn is accustomed to. He explains that there are multiple Evelyns and Waymonds in multiple timelines across an endless multiverse. Evelyn must learn how to tap into the alternate versions of herself across the multiverse and use their skills to stop Jobu Tupaki, a nihilistic force threatening the existence of humanity.

This opens things up for Daniels – Dan Kwan and Daniel Scheinert – to experiment with numerous absurd universes where their creative and very particular sense of humour comes to the fore. We see Evelyn embroiled in a romance with hard-nosed IRS auditor Deirdre (Jamie Lee Curtis) in a universe where everyone has hot dogs for fingers. In another universe, Evelyn is a movie star in a swooning, neon-soaked Wong Kar Wai homage. In another, she works alongside a teppanyaki chef who is controlled, Ratatouille-style, by a raccoon living under his hat.

As you might expect from the guys who turned Daniel Radcliffe into a flatulent corpse, a lot of the humour across these universes is as juvenile as it is inventive, but the film’s biggest failing is diminishing returns. The visual of Evelyn with hot dog fingers is funny. The reveal of a raccoon controlling a chef is funny. But these gags – and numerous others – are dragged out across the film as we cut back to the same universes throughout, and naturally they not only lose their effectiveness, they begin to grate. Even the excursion into a universe where no life exists, only rocks, is a great gag at first but is eventually ground into dust.

What’s more interesting is how these alternate realities feed back into Evelyn’s life and help her appreciate what she has. The alternate versions of Waymond rekindle the spark in her for a husband she’d long given up on. Her hot-dog-fingered tryst with Deidre is surely no coincidence given her reluctance to accept Joy’s girlfriend, Becky. It’s the family drama at the heart of Everything Everywhere All At Once that grounds the film’s chaotic, frenetic style in something real and relatable. As Daniels proved with Swiss Army Man, they know how to find moments of humanity and heart in a ludicrous world and they manage that here, despite the messy, overstuffed nature of the narrative. 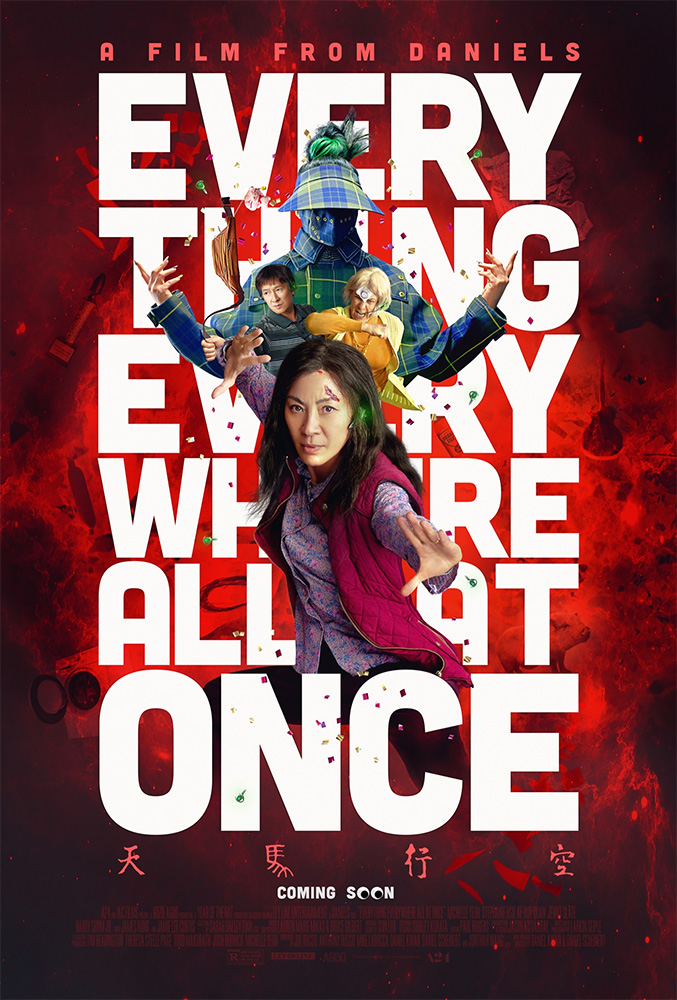