Drone warfare is understandably a hot button topic. It is often depicted as a callous and impersonal act of killing carried out with video-game detachment by soldiers hundreds of miles away from the situation. Not so in Gavin Hood’s tightly constructed new thriller Eye in the Sky which focuses entirely on the decision to greenlight a drone strike on a house full of terrorists in Nairobi.

Helen Mirren stars as Katherine Powell, a long-serving Colonel in the UK military. She’s been tracking a radicalised British woman who has joined a Kenyan terrorist group. Powell is heading up an operation to capture this woman but when drone surveillance locates her in a house full of terrorists preparing for a suicide bombing mission, it becomes clear that capture is no longer an option and they have to go in for the kill.

The rest of the film is a tangled mess of bureaucracy, collateral damage, PR disasters and passing the buck as no-one wants to be the one who gives the order to pull the trigger. Powell knows this is a rare chance to get not just one but three of the most wanted targets in North Africa and her superior Lt. General Benson (Alan Rickman), watching the feed with members of the government in London, is keen to go ahead with it too. But the assorted political and legal bods in the room are all more concerned with being held accountable for a potential press disaster than weighing up the lives of the innocent people who may be killed if they do – or don’t – take the shot.

Ultimately, they would all rather “refer up” to their superiors than make any decision. The only problem is, their superiors aren’t all too keen on making the decision either. Take Iain Glen’s Foreign Secretary who, in one of the film’s funniest scenes, is beset with a bout of food poisoning and refuses to make a definitive decision, instead deferring to the US Secretary of State. In a wrinkle so perfectly absurd – and sadly believable – he’s currently playing ping pong at a PR event in Beijing and takes less than a minute to tell the Brits to take the shot. The Foreign Secretary gives the go-ahead as long as the military does their best to minimise the collateral damage.

While the suits debate the political and public relations issues involved in the situation, the ones truly concerned with the human cost of it all are the Nevada-based drone pilot Watts (Aaron Paul) and his co-pilot Gershon (Phoebe Fox), two relative newbies tasked with pulling the trigger if this attack actually goes ahead. It’s these characters, Watts in particular, who will have to live with the fallout of this scenario, regardless of whether they’re legally or professionally covered. They might not make the decision but they have to carry out the act and the lives of the civilians who could be caught in the blast will be on their conscience.

Civilians like Alia (newcomer Aisha Takow), a young Kenyan girl who the film follows as she plays with her hula hoop and sells her mother’s bread on the street. She’s inadvertently caught up in this whole mess when she opts to set up her bread stall in the street outside the targeted house. This ups the emotional ante as everyone involved knows the blast would likely kill the girl but Powell is willing to sacrifice the girl to prevent the terrorists and their explosives getting out of the house and into a public place.

Keeping tabs on the situation on the ground is Jama (Barkhad Abdi, of Captain Phillips fame), an undercover Somalian who is doing his best to discreetly get Alia out of there before Watts gets the go ahead to launch the missile. Abdi gives a strong performance in a film full of them, with Mirren at her most fierce and Rickman, in his final performance, bringing a wryly humorous edge to his seen-it-all military man. The standout though is Paul, whose face projects the inner anguish that he faces at having to knowingly kill civilians and have no say in the matter.

Films about war can be guilty of obvious moralising and descend into horrors-of-war cliché while simultaneously glorifying the action and violence. Eye in the Sky is smarter than that and sidesteps any clunky clichés in favour of building tension, while not being afraid to poke fun at the bureaucratic farce behind the scenes while people’s lives are in the balance. Hood does a fantastic job of incrementally raising the stakes at just the right moment, keeping the film moving at a rapid pace and ultimately he has crafted a solidly-made, well-acted and completely gripping thriller. 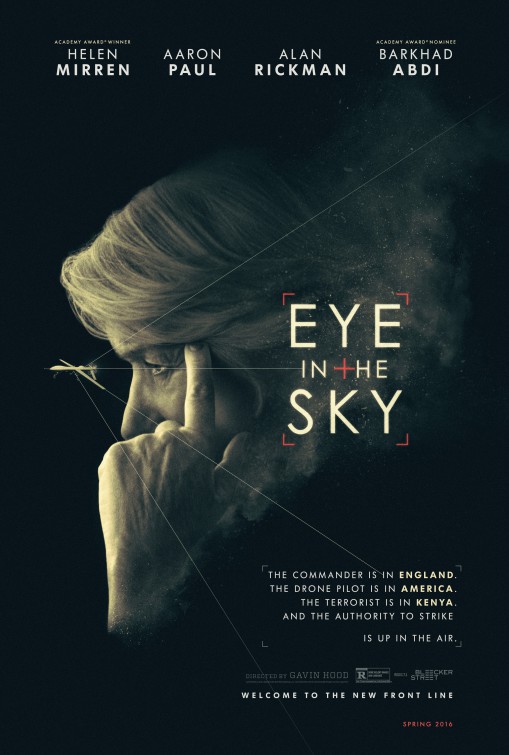