If there’s one thing Hollywood loves more than anything right now, it’s a big franchise, and they don’t come much bigger than Harry Potter. It’s no surprise then that five years after JK Rowling’s epic saga ended, we’re in spinoff territory with Fantastic Beasts and Where to Find Them. With Potter regular David Yates behind the camera, Fantastic Beasts picks up where the latter films in that series left off tonally and visually, but with its 1920s New York setting, it opens up a whole other world of wizarding possibilities.

Where the Potter films were generally stuck in and around Hogwarts, Fantastic Beasts opens things out to the wider world as former Dumbledore apprentice and current ‘magi-zoologist’ Newt Scamander (Eddie Redmayne) arrives in New York City with a suitcase full of – you guessed it – fantastic beasts. The switch to the US gives Rowling the chance to explore a time and place where the rules of magic are the same but the wizarding world is different, in ways both small and large. The wizards – known in the US as witches – are persecuted and as such they operate in the shadows, led by the Magical Congress of the United States of America (MACUSA).

The MACUSA operate like a kind of magical Men In Black, policing the magical community and wiping the memories of any muggles – or non-maj’s, as they’re known in the States – who happen to see anything. Top of their to-do list at the moment is stopping Gellert Grindelwald (Johnny Depp), a radical wizarding extremist who believes wizards should not be relegated to the shadows and is plotting a violent takeover of the no-maj world. In the middle of all of this is Credence (Ezra Miller), a disturbed teen and closeted wizard who is working with MACUSA agent Graves (Colin Farrell) to find something Very Important before Grindelwald does.

The film essentially runs two parallel plots and Rowling – in her first screenwriting gig – seems to have a hard time meshing them together. On one hand, we have the lighter story of Newt and his new friends Tina (Katherine Waterston), a MACUSA dogsbody, and Kowalski (Dan Fogler), a no-maj who ends up letting all of the creatures out of the suitcase. Their quest is to find the creatures and get them back in the case safe and sound, which is fluffy fare compared to the darker plot centring on Credence and his adoptive mother Mary Lou (Samantha Morton), a fierce activist who is leading an anti-witch campaign.

It’s a lot to juggle and the two sides don’t feel like they form a coherent whole, coming together towards the end so we can have a perfunctory action climax and set things in motion for the next four(!) films in the series. It’s a problem both in this film and in a lot of current blockbusters that there’s simply too many moving parts and the film just gets progressively more boring as it progresses through the hefty plot.

Where the film is at its strongest is in its world building, establishing this new side of the magic community and introducing a series of new creatures that are all beautifully realised. Newt’s suitcase is revealed to be Tardis-like, opening out into a sprawling supernatural ranch where his collection of rare and protected species get to roam free. One of the film’s best scenes sees Newt take Kowalski into the suitcase to tend to the animals and we get introduced to them,including an adorable stick insect named Pickett, a giant, rhinoceros-like creature that’s feeling frisky and a mischievous platypus-type creature with an eye for shiny things.

As the hero tasked with shouldering this series, Eddie Redmayne turns in an interesting performance but it’s one that doesn’t entirely work. He plays Newt as painfully shy around people, shunning eye contact and muttering, but then coming to life more around the creatures. His performance seems designed to make Newt as endearing as possible but he ultimately grates more than he charms. The supporting cast fare better, particularly Fogler, who dials back his usual schtick to create an effective and likeable audience surrogate. There’s also a delightful turn from Transparent’s Alison Sudal as Queenie, Tina’s flirty, mindreading sister.

There’s definitely a fantastic movie inside Fantastic Beasts and Where to Find Them, but it can be hard to find amongst the lumpy plot and rambling running time. Rowling creates a vivid and immersive world, while weaving a welcome thread of politics through the film, from an environmental message to a look at radicalisation that both feel timely, but she and Yates struggle to pull everything together into one satisfying film. Despite the positives, the end result is more exhausting than a family blockbuster should probably be. 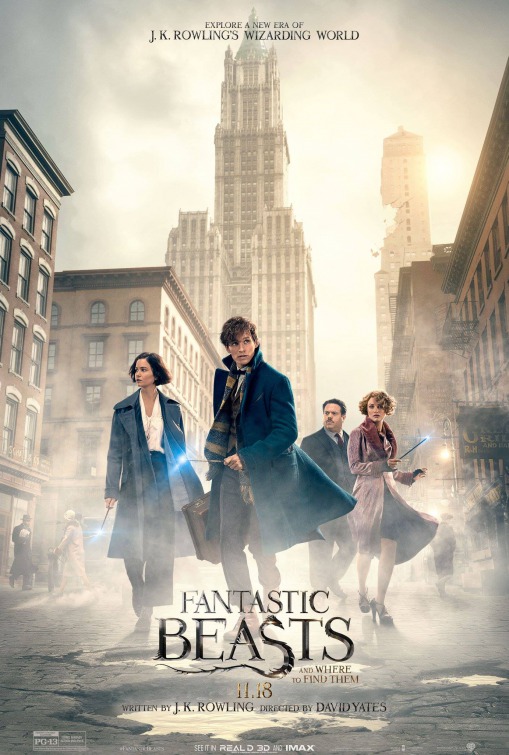