Fantastic Four is clearly a conflicted movie. That much is clear from the cloud of bad publicity surrounding both the studio – Fox – and the film’s director Josh Trank leading up to release, and it’s just as clear from the unfortunate mess that plays out on screen. Rumours of Trank’s erratic behaviour on set leading to the studio locking him out of the editing suite and ordering late reshoots may or may not be true but the final film is clearly not the product of a seamless filmmaking process.

It all starts out well enough: we meet Reed Richards as a young boy, a nerdy kid who is laughed out of class for telling everyone his career goal is to crack teleportation. The only one who takes him seriously is Ben Grimm, the down-trodden youngest son of a working class family who run a scrapyard. Cut to seven years later and the pair – now grown up and played by Miles Teller and Jamie Bell – are presenting their teleportation device at their high school science fair.

Reed’s contraption has brought him to the attention of Dr Storm (Reg E Cathey) who enlists him to come and apply his discoveries to the similar technology that’s being developed at Storm’s Baxter building. Reed is teamed with Storm’s adopted daughter Sue (Kate Mara), her cocky younger brother Johnny (Michael B Jordan) and Storm’s troubled-but-brilliant former protégé Victor Von Doom (Toby Kebbell). Together they build a teleportation device that can send objects – and eventually a chimp – to another dimension and back.

This portion of the film takes up almost half of the running time and although what they’re doing in the lab is often very vague and never particularly interesting – Sue does a lot of intense typing, Reed does some welding – but there is a hint of some potentially compelling dynamics in the group. Only a hint though, none of these relationships – Sue and Reed’s blossoming romance, Johnny and Sue’s seemingly fractured sibling bond, Victor’s feelings toward Sue – are fleshed out enough, except possibly Reed and Ben’s friendship but even that is hampered by Ben disappearing for long stretches of the film.

It’s clear what the intentions were here but despite taking an age to really go anywhere, everything feels half-baked and underwritten. Yet somehow, it’s all downhill from there. When Reed, Victor and Johnny discover that the suits in charge are planning to send someone else to the other dimension, they drunkenly decide that the three of them – plus Ben – should get the glory they’ve been working toward and take their invention for a spin.

Of course, things go pear-shaped on the newly christened ‘Planet Zero’, a gloomy landscape made up of sand, rocks and a glowing green lava that swallows up Victor before the other three manage to escape, but not unscathed: Reed emerges with the ability to stretch his body; Johnny can set himself on fire; and Ben is transformed into a towering golem made of orange rock. Poor old Sue – who didn’t even get to go on the trip – is caught in the crossfire and can now make herself invisible.

The film then inexplicably jumps forward a year. That’s right, as soon as the team finally get their powers, the film completely skips the second act. It feels like a studio-led move, trying to steer the film towards a more conventional comic book finale because it makes no sense from a story-telling perspective and completely derails everything the film was building toward.

The most enjoyable section of Trank’s smart indie debut Chronicle – the film that got him this gig to begin with – was watching the high school kids getting to grips with the powers they gained from an alien life form. With Fantastic Four, all of that’s abandoned and we find the gang completely in control of their abilities and being courted by the military and slimy corporate suit Dr Allen (Tim Blake Nelson).

No sooner have we gotten over the jarring time jump does the film just launch into its finale and what a mess that is. Another mission to Planet Zero leads to an altercation with Victor who seems to have been living happily in this other dimension for a year. He’s upset at the thought of humans coming along and ruining his new home so with the help of some poorly defined powers and 90’s era special effects, he plans to destroy Earth as we know it. This represents the first time we actually see the titular foursome on screen together, using their powers, and it’s impossible to invest in. It all happens so quickly and so sloppily; it’s baffling that this made it into a major studio comic book movie in this day and age.

The film isn’t devoid of good ideas and there are occasional glimpses of potential. An atmospheric scene involving Doom’s return to Earth gives the impression, only for a few minutes, that he is a truly formidable villain. The team discovering their new enhancements provides some moments of evocative, sub-Cronenbergian body horror that are the best scenes in the film. Even the tweak to the origin story – discovering a new, Earth-like planet to plunder for resources rather than the Space Race era jaunts into new galaxies – is smart and relevant.

Sadly it’s all undercut by the mystifying third act and the vast array of incomprehensible storytelling decisions. The studio vs. director hubbub might have made headlines but neither party is blameless here. The plan might have been to go in a serious direction but Fantastic Four is ultimately a dour, airless and relentlessly self-serious mess. The only ones who emerge with their dignity intact are the talented actors hung out to try by everything going on around them. Let this be yet another lesson that an expiring contract is never a good reason to make a film. 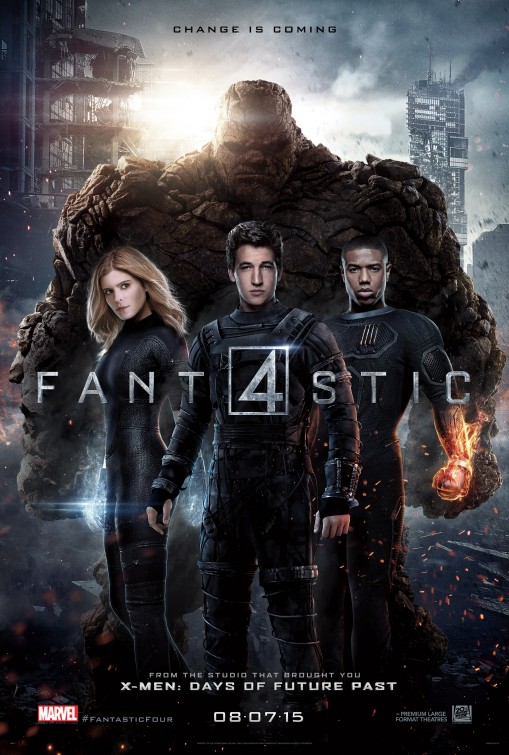