The trajectory of the Fast & Furious franchise is almost inconceivable. Starting all the way back in 2001 with The Fast & The Furious, the series looked to be running out of gas pretty quickly with dismal sequels 2 Fast 2 Furious and seemingly unrelated Tokyo Drift signalling a steady decline in box office receipts.

But Tokyo Drift is significant for bringing director Justin Lin to the series, the Taiwanese director who has been largely responsible for bringing the series to its highest point. After finding his feet with Drift and 2009’s Fast & Furious, Lin’s Fast Five was by far the best film in the series and one of the most stupidly enjoyable action films of recent years.

Unlike any other movie in the series then, Fast & Furious 6 comes with some high expectations and while it doesn’t quite match its predecessor, it isn’t a disappointment either.

The whole Fast Five crew is back this time around: Dom (Vin Diesel), Brian (Paul Walker), Roman (Tyrese Gibson), Han (Sung Kang), Gisele (Gal Gadot) and Tej (Ludacris), as well as Dwayne Johnson’s FBI Agent Luke Hobbs who needs the gang’s help to stop former British Special Forces soilder Owen Shaw (Luke Evans). Shaw is stealing the parts necessary to make a Nightshade device that can knock out the power in an entire region and plans to sell it off to the highest bidder. Why is that Dom’s problem? Well, his ex Letty (Michelle Rodriguez), who seemingly died two movies ago, is part of Shaw’s team.

In exchange for amnesty for their previous crimes, Dom and the gang agree to help Hobbs and make their way to London for a whole host of massive, vehicular-themed action sequences, expertly lensed by Lin. It’s become the norm in action movies to cut action scenes and fight scenes so frantically that it’s impossible to tell what’s going on, who’s hitting who, what car that was or why should we care in the first place. But Lin keeps it simple, shooting his huge set pieces in such a way that we can actually see and appreciate what’s on display. Lin is also an advocate of practical effects where possible and it really shows here. Most scenes have a weight to them that’s often lacking with shonky CGI, making even the most preposterous scenes feel a little bit more plausible.

That’s not to say there aren’t aspects of the film that are problematic. In fact, like any film in the series it would all collapse if you stopped to think about it for a second. There are numerous glaring plot holes and ludicrous leaps in logic that could sink the film but everything is so blisteringly entertaining, endearingly devoid of pretension or irony, that it papers over most of the cracks. Despite the immense entertainment factor, the 130 minute running time is still a stretch, bloated by side plots and solo excursions that could have easily been excised.

The Fast & Furious series is one of the few pure action franchises left. There are no superheroes, robots or aliens here, just burly guys, tough chicks and fast cars. Oh, and a tank. Devoted fans of the series will eat this up, especially with the numerous sentimental nods to previous entries that might make certain plot elements slightly confusing for the uninitiated but the non-stop action thrills are universal.

Stick around for a post-credits stinger that ties Tokyo Drift into the timeline and sets up the next sequel. 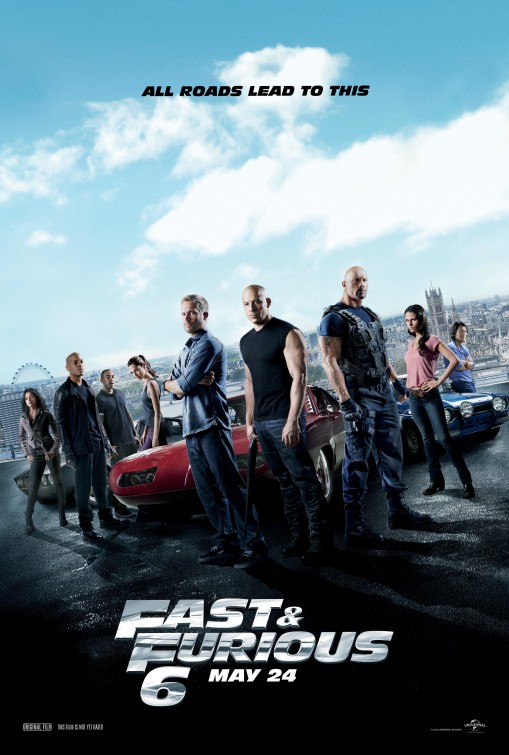