Beginning life as a humble rejig of Point Break for the street-racing world before eventually morphing into a huge, unwieldy, action movie behemoth, the Fast & Furious franchise has been on a long, strange journey in the 14 years since it began. The tragic real-life twist of star Paul Walker’s death late in 2013 left the franchise in a state of flux but with the use of Walker’s younger brothers and some slick CGI, latest instalment Fast & Furious 7 has made it to cinemas and it’s a fitting tribute to its fallen star.

Walker has been a central part of the series from the beginning. His undercover cop Brian O’Connor was the hero and since then, he’s been absent from only one film: Tokyo Drift, a film that looked set to usher in a straight-to-DVD future for the series. The series and cast has grown around Walker but it is Brian’s relationship with Mia (Jordana Brewster) and his bromance with her brother Dom (Vin Diesel) that provides the film with a dose of real heart and the family values that the series pushes at every opportunity.

Fast & Furious 7 first finds Brian in a familiar situation: behind the wheel of a car, brow furrowed, revving the engine furiously. It turns out to be one of the film’s best gags as the camera cuts to reveal the car is a minivan and he screeches forward two-feet to drop off his kid at nursery. Domestic bliss doesn’t exactly sit well with Brian, which worries Mia since she has another bun in the oven.

Meanwhile Dom and Letty (Michelle Rodriguez) are still trying to get their relationship back after she was thought to be dead but turned up with amnesia in the previous film. Only this franchise could pull off that storyline and even have the audacity to include a scene of Letty visiting her own grave.

Domestic bliss doesn’t last long though and before you can say “ride or die”, Dom and Brian have to round up the rest of the gang to go on another globetrotting mission, tasked by shady government type Frank Petty (Kurt Russell) rescue a mysterious hacker named Ramsey (Nathalie Emmanuel) from a mercenary (Djimon Honsou) who wants control of her invention, a surveillance tool named ‘God’s Eye’ that can use any phone, camera or audio device to track down anyone, anywhere in the world.

In exchange for procuring the God’s Eye, Petty will let Dom use it to track down Deckard Shaw (Jason Statham), the black ops badass looking to avenge his brother Owen (Luke Evans), who the crew left crippled at the end of Furious 6. Shaw has already killed Han and hospitalised hulking DSS Agent Hobbs (The Rock) and has his sights set on the rest of the team. Considering his penchant for following the crew around the globe and popping up from nowhere to try and kill them, quite why Dom needs God’s Eye to find him is anyone’s guess.

Nonetheless, this plot serves its purpose in providing enough reason to send our heroes across the globe to the Caucasus Mountains in Azerbaijan for a thrilling mountainside chase with an armed convoy that mixes old school fast-car action beats with bone crunching hand-to-hand combat and something new entirely: sky-diving cars. From there, they hop over to Abu Dhabi to infiltrate a part and steal a supercar from the top of a skyscraper. How they manage it defies description and needs to be seen for itself.

The grand finale takes place back in their beloved LA in an explosive, exhausting action climax that delivers on every level and if there’s one thing this franchise always does well, it’s delivering exactly what the fans would want from it. Sure, none of the performances will have Daniel Day-Lewis sitting up to take notice and the storylines often veer heavily into soap opera dramatics but director James Wan – and series regular Justin Lin before him – deliver the moments you want to see. From Dom wheely-ing his Dodge Charger to Hobbs brandishing a mini-gun and spouting one-liners, this film knows what you want and gives it to you.

It also delivers action movie dream matchups on a level that a series built on that premise – The Expendables – can only dream of. In this film alone we get Statham and The Rock throwing it down in an office, Walker going head-to-head with martial arts supremo Tony Jaa in a moving bus, Rodriguez mixing it up with UFC Champion Ronda Rousey and finally Diesel taking on Statham with a couple of giant wrenches as weapons.

Action has always been something this series has delivered well – particularly in latter instalments, where Lin’s clean, well-staged action scenes have been the highlight (Wan steps in without missing a beat here) – but this time out there’s an added sentimentality and even one or two moments that are genuinely moving. Of course, much of that is due to the knowledge of Walker’s death but losing him helps highlight how much history there is between this cast and these characters. The franchise started 14 years ago and many characters have come and gone, some of them even coming back from the dead; there is a weight in that history and it’s felt here. Family is the word that crops up most, both from the characters and their real life counterparts, and it’s never been more keenly felt than it is here.

As ever, it would be easy to sit and pick holes in this film. The ropey acting, the soapy storylines and the over-the-top action is all ripe for mockery but somehow it all just adds up to a fantastic cinematic experience. Everything here is just massive, from the overblown action to The Rock’s biceps, and it moves at a quick enough pace to prevent any thinking to occur. The only time things really slow down is for a pitch-perfect tribute to Walker that provides closure for his character in a tasteful way. Who knows where this remarkable franchise will go next is anyone’s guess but James Wan – or whoever else may take the reins – will have a hard time topping Fast & Furious 7. 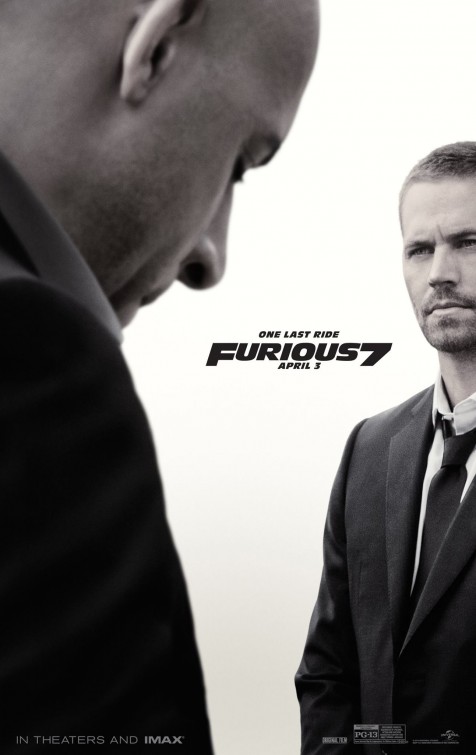