Filth is probably the most apt title a film has had this year, but what would you expect from the mind of Irvine Welsh? The Trainspotting author’s third novel provides the basis for Jon S. Baird’s film, telling the sordid tale of Bruce Robertson, an unrelentingly repulsive Edinburgh police inspector who fills his days with a cocktail of booze, drugs and deviant sex.

Bruce is played by James McAvoy in a knockout performance, transforming from the clean-cut presence we’re used to seeing into a bulkier, rougher and nastier character. It would be easy for this character to be a complete write-off, a one-dimensional nightmare that can’t carry an entire film. But McAvoy brings a complexity to the role that keeps Bruce a compelling character, though never a particularly likeable one.

Bruce is vying for a promotion at the police force and is assigned to work the murder of a foreign student who was found beaten to death in a tunnel. His focus seems to lie elsewhere however, mainly tormenting those around him. Firstly, there are his colleagues – including Jamie Bell and Imogen Poots, giving the Edinburgh accent their best shot – who are all being played off against each other to ensure none can compete for Bruce’s promotion.

Then there’s Clifford Blades (Eddie Marsan, fantastic), a bespectacled milquetoast from the Masonic Lodge and the only thing remotely resembling a friend in his life. Bruce shows his friendship by drugging poor Clifford and tormenting his wife with lewd late night phone calls, under the guise of Frank Sidebottom no less.

No matter how much you know you shouldn’t, it’s hard not to laugh with Bruce as he terrorizes his friends, colleagues and pretty much anyone he comes into contact with, abusing his position at every possible opportunity. No matter how dark it gets – and things get pitch black – Filth is always raucously funny, with gross out scenes to rival Trainspotting and a vocabulary that would make Begby blush.

Writer/director Jon S. Baird does a good job of managing Filth’s schizophrenia, bringing enough of an emotional core to anchor the cartoonish characters and surreal asides, including a bizarre appearance from David Soul. In a wise move, Baird has transported the tapeworm character from the novel into the body is Jim Broadbent’s psychiatrist, who appears to Bruce in a number of bizarre dream sequences, giving a hilariously off-kilter performance.

Where many other Welsh adaptations have faltered, Filth is a very good stab at the material that doesn’t quite have the same impact as Danny Boyle’s breakthrough film did in the 90’s, but it can certainly hold its own. It’s darkly funny, completely depraved and packs a surprisingly emotional gut-punch of an ending, to James McAvoy’s towering portrayal of a bipolar bigot who is rapidly losing his grip on reality. 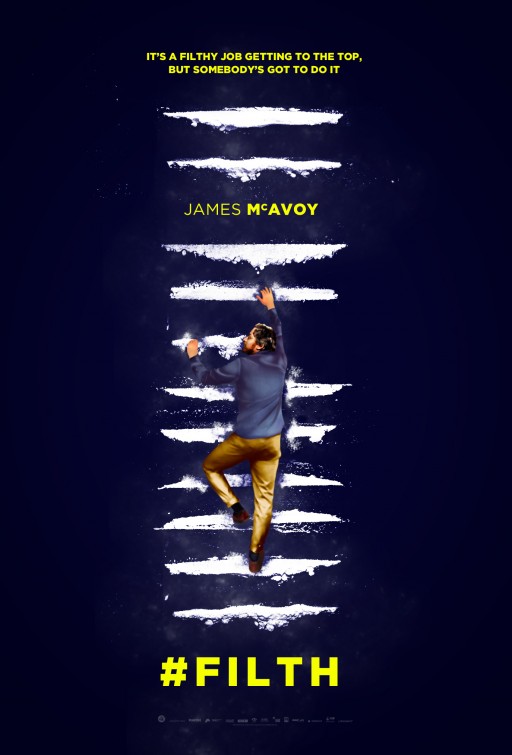