After over a decade in the motion-capture doldrums, director Robert Zemeckis has returned to live action filmmaking with Flight, one of the most conventional films of his career but also one of the best, anchored by a towering central performance by Denzel Washington, himself turning in his best work in a long time.

Washington plays Captain Whip Whitaker, a commercial airline pilot whose plane malfunctions on a routine flight from Florida to Georgia and thanks to some incredible manoeuvres, he manages to land the plane in a field. The crash is still terrible but his skills saved numerous lives and avoided an even bigger tragedy. He’s rightfully praised as a hero. That is until his toxicology report shows he had alcohol and cocaine in his system after a night of hard partying with a stewardess.

With Whitaker facing prison time, the airline brings in cocksure lawyer Hugh Lang (Don Cheadle) to get the toxicology report thrown out and the blame put on faulty engineering. All Whitaker has to do is stay clean and sober until his hearing which is easier said than done as he holes up in his old family and descends into complete alcohol addiction.

From the opening scene of a hungover Whitaker waking up with a naked stewardess (Nadine Velasquez) and doing a couple lines of coke to straighten himself up, right to the moment the plane crashes in a field next to a church, Flight is an intense and compelling film. Zemeckis directs the plane crash with a lot of flare, creating a harrowing and thrilling spectacle with Washington’s powerhouse performance at the centre of it. But after such a breathtaking sequence – as well as a strong scene in a hospital stairwell with Whitaker, recovering addict Nicole (Kelly Reilly) and a cancer patient (James Badge Dale) – the film settles down into a standard addiction drama with elements of a courtroom procedural. It’s all entertaining enough but feels slightly flat and predictable after such a powerful first half.

Zemeckis and screenwriter John Gatins also display a lack of subtlety that distracts from the meat of the story, the worst of which is probably the sound track with songs as on the nose as ‘Under the Bridge’ when a heroin addict is shooting up or ‘Sympathy for the Devil’ used not once, but twice, as the introduction to John Goodman’s bizarre drug dealer character. It’s a fun performance from Goodman but seems straight out of a different film.

Gatins’ screenplay also jams in a number of ham-fisted religious references which are never fully explored and seem to serve no purpose other than to point to a predictably redemptive ending.

Despite these issues, Flight’s ace in the hole is Washington who is on top form. Though he is consistently good, even in films that don’t deserve his talents, this is a notch above and proves to be his best work since his Oscar-winning turn in Training Day. There’s also strong support from Reilly as damaged junkie Nicole and Bruce Greenwood as Whitaker’s union rep.

Ultimately Flight is a film of two halves and sadly it’s the latter half that lets it down, falling into addiction drama cliché all too often. But thanks to the performances of a strong cast and a phenomenal opening third, Flight is an entertaining watch that asks some compelling questions about addiction and culpability as well as marking a strong return to live action for Zemeckis. 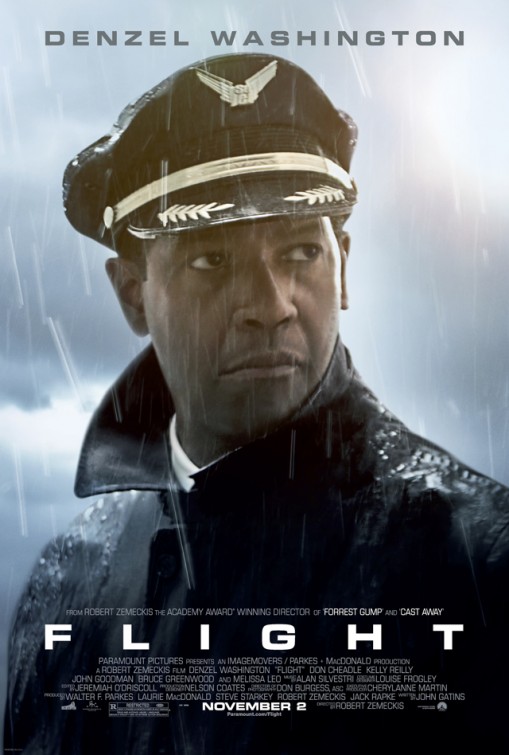