With one eye on seventies crime cinema and a set-up that echoes Reservoir Dogs, Ben Wheatley’s raucous shoot ‘em up Free Fire can’t help but feel like one of those Tarantino knock-offs that poured into cinemas in the ‘90s. But Wheatley, as always, puts his unique spin on it, avoiding any convoluted plotting and whittling down the backstory until all that’s left is a lean, violent and darkly comic excuse for one big, messy gun fight.

The set-up could hardly be more simple: in mid-1970s Boston, a couple of Irish terrorists – Chris (Cillian Murphy) and Frank (Michael Smiley) – are looking to buy some firearms from South African arms dealer Vernon (Sharlto Copley). Fixers Justine (Brie Larson) and Ord (Armie Hammer) are on hand to broker the deal and make sure everything goes smoothly. With all of these crims in one run-down warehouse with a pile of automatic weapons and a stockpile of ammo, what could possibly go wrong?

Wheatley and co-writer Amy Jump manage to establish these characters in the early goings, creating micro-conflicts and casual flirtations between characters that informs their behaviour when the bullets inevitably begin to fly. There’s tension right from the off between no-nonsense, stony-faced Frank and Vernon, who Copley plays as a preening cock-of-the-walk, walking away with the film tucked into the inner pocket of his garish seventies suit. Things are more amicable between Justine and Chris, who make dinner plans despite the cacophony of bullets happening around them.

The cast that Wheatley has assembled here is his most starry by a distance and it’s clear why they were attracted to the project. Each one seems to relish the chewy dialogue that walks the line between cool-silly and just downright silly. As well as Copley’s scenery-devouring turn, Armie Hammer brings a loose, stoned charisma to his well-dressed, beard-oil-drenched arms dealer. Sam Riley and Jack Reynor are also on hand with a couple of nicely skeezy supporting turns as opposing hired muscle with a personal grudge.

Wheatley lines up all of these colourful characters and then lets loose with a shootout that essentially lasts for at least two-thirds of the film’s run time. It’s a set piece unlike anything Wheatley has commanded before and he proves he’s up to the task, mapping out the geography of the warehouse well so there’s no confusion to the choreography. Though it’s clear where everyone is and what’s happening, there’s a welcome messiness to the action itself: none of these people are marksmen and it shows, with stray bullets ricocheting off the walls and floors of the warehouse more often than they actually find flesh. Then when they do connect, characters are injured or incapacitated at best; these gunshots actually hurt.

As is to be expected with what is essentially an hour-long action scene, the novelty does begin to wear off and Free Fire finds itself flagging at various points. Wheatley varies the pacing well, giving us a breather from the gunshots and allowing his characters to swap some salty language but there are only so many compelling combinations of hiding-and-shooting. Even at 90 minutes, the film often feels like it’s treading water, trying to keep itself going just long enough to reach its mostly satisfying climax.

For the most part though, Free Fire is a witty and entertaining foray into action filmmaking for Wheatley; a typically irreverent romp that finds strength in its simplicity. There isn’t much that resonates here and very little going on beneath its chaotic surface but it’s satisfying as a brief and bloody exercise in economic scripting and madcap action. 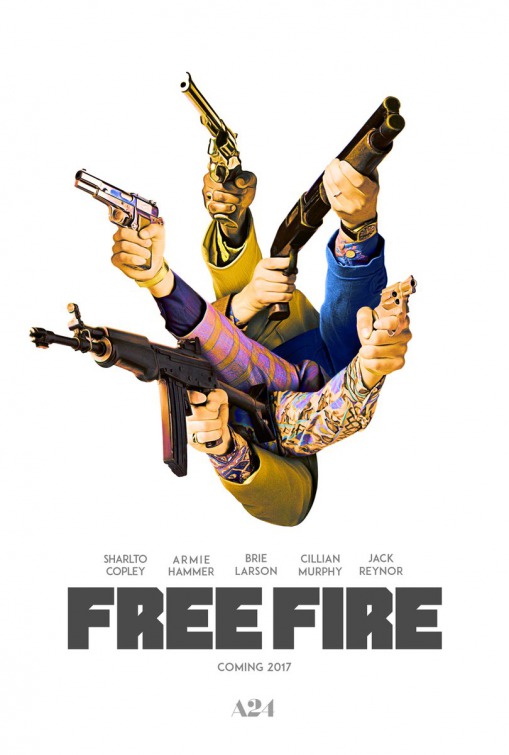