After Love & Other Drugs and No Strings Attached, it seems the ‘friends with benefits’ angle is the latest trend in Hollywood romcoms. So along comes Friends With Benefits, a fun if predictable modern take on When Harry Met Sally, again posing the question: can two friends have sex without ruining their friendship?

The two friends in question this time are Dylan (Timberlake), art director of a successful online blog, and Jamie (Kunis), a corporate headhunter. Jamie persuades Dylan to fly into New York for a big interview with GQ magazine, leading to their meet cute at the airport. They immediately hit it off though Dylan is sceptical about the job until Jamie takes him for a magical night on the town, persuading him to up sticks and move to New York. Their friendship grows rapidly through a series of party montages until one night they’re watching a cheesy romantic comedy (Jason Segel and Rashida Jones turning up to provide a nice self parody) and inevitably, the pair decide to embark on a purely physical relationship with no emotion involved, no strings attached.

Of course the pair are perfect for each other but spend the film denying it as numerous obstacles stand in their way in true clichéd romantic comedy fashion. There is nothing new here but director Will Gluck, hot off the heels of last year’s fantastic Easy A, has assembled a strong cast who elevate the material. Timberlake has so far had a mixed track record since jumping into movies but proves a likeable enough lead here, showing he’s adept at light comedy. Kunis has already shown in the likes of Forgetting Sarah Marshall that she has what it takes for an R rated comedy and here again she is immensely charming and loveable throughout. The pair are supported by a colourful array of supporting characters headed up by Dylan’s friend Tommy (Harrelson), the gay sports editor at GQ who walks away with every scene he’s in. There’s also Jamie’s 60’s throwback mother Lorna (Clarkson), on hand to fill the girly best friend role, and Dylan’s Alzheimer’s inflicted father (Jenkins) who arrives at clarity long enough to provide the pivotal sage advice at the film’s climax.

The actors are given some solid laughs to work with through some sly dialogue lampooning the romcom genre and some more broad laughs, including Dylan’s rendition of Kriss Kross Will Make You Jump. However, the script does occasionally feel slightly disjointed with the zanier comedy set pieces feeling out of place. The introduction of Jenkins’ character late into the film also feels like something parachuted from an entirely different film, his struggle with Alzheimer’s feeling too weighty for an otherwise light-hearted comedy. Jenkins of course brings warmth and subtlety to the character, perhaps more than is necessary.

Friends With Benefits is a clichéd, predictable romantic comedy and it’s slightly hard to believe it takes two people as attractive as Timberlake and Kunis so long to entertain the idea of sleeping together. However the talented cast and some smart dialogue raise this above some other recent entries into the genre and make for more than just an average date movie. 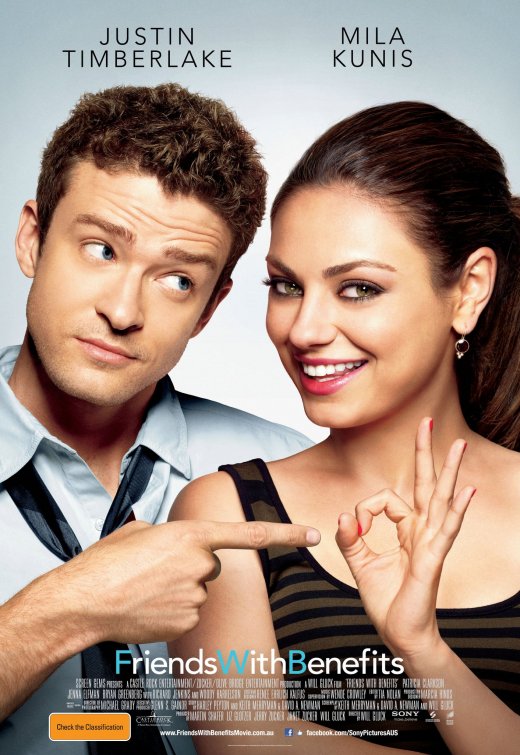