Films about racism hew closely to the same template so often that when something as fresh as Jordan Peele’s Get Out comes along, it’s all the more effective. Instead of the usual worthy period piece that depicts black characters overcoming prejudice, Peele tackles the subject through a whip-smart and wickedly funny horror. Crucially, it’s also set in the here and now, not in a shameful bygone era that some might like to think we’ve moved past; this is the contemporary black experience and all of the anxieties that entails.

Peele opens with a familiar horror movie trope: introducing a character who quickly meets a nasty end before the real story starts. Only Peele’s opener draws as much inspiration from tragic headlines as he does genre flicks, focussing on a young black man (Lakeith Stanfield) wandering through white suburbia at night. You know nothing good can come from this and so does he, particularly when a white sports car arrives on the street, blaring “Run Rabbit Run” no less. He knows he wants nothing to do with it: “Not today”, he tells himself, “you know how they do you out here”.

Cut to our actual protagonist, Chris (Daniel Kaluuya) and his girlfriend Rose (Allison Williams). They’re getting ready to head upstate for the weekend to visit Rose’s parents and Chris is anxious, particularly as Rose hasn’t told her parents he’s black. She assures him they’re cool and sure enough, they are: Missy (Catherine Keener) and Dean (Bradley Whitford) couldn’t be any nicer. In fact, they might be trying too hard, particularly Dean who constantly refers to Chris as “my man” and assures him he’d have voted for Obama a third time if he could have.

Are these well-meaning but clueless comments or genuine microaggressions? Is Chris just on edge because he’s in such a white environment or is something deeper going on? It doesn’t help that the only other black people around – groundsman Walter (Marcus Henderson) and housekeeper Georgina (Betty Gabriel) – are acting stranger than anyone. What starts off as a modern take on Guess Who’s Coming to Dinner? shifts into something more like Rosemary’s Baby or The Stepford Wives, particularly once Chris find himself in the middle of an excruciating dinner party where beyond just the casual racism he has to endure, it becomes clear that something more sinister is going on.

Though the film inevitably starts to wobble a little in its third act when its secrets begin to reveal themselves – as so many horrors do – it never loses sight of its true antagonist: white liberal racism. Rose presents as an ‘ally’, someone who’s so woke that she doesn’t even think to tell her parents that her boyfriend is black. But when she exercises her privilege and berates a cop who simply asked to see Chris’ ID, it feels more for her benefit than her boyfriend’s. Get Out isn’t about overt, cross-burning racism, it’s about that discrete white liberal racism and Peele gets beneath the socially conscious veneer of Rose’s family to expose their casual, latent prejudice.

After exploring similar ideas on his acclaimed sketch show Key & Peele, Peele’s first time behind the camera is as assured and confident a debut as you’re likely to see. Given his roots in comedy, it’s no surprise that Get Out is so funny but it’s the way Peele uses the humour that’s so impressive. He’s in complete control of the tone and pacing of the film, building up tension – at first the awkward, social kind, later something more violent – before puncturing it with a well-placed gag. It’s clear Peele is a smart and cine-literate filmmaker with a deep love of horror but it’s the social commentary that he weaves so tightly into the fabric of Get Out that makes it resonate beyond its expertly crafted scares and grisly body horror. 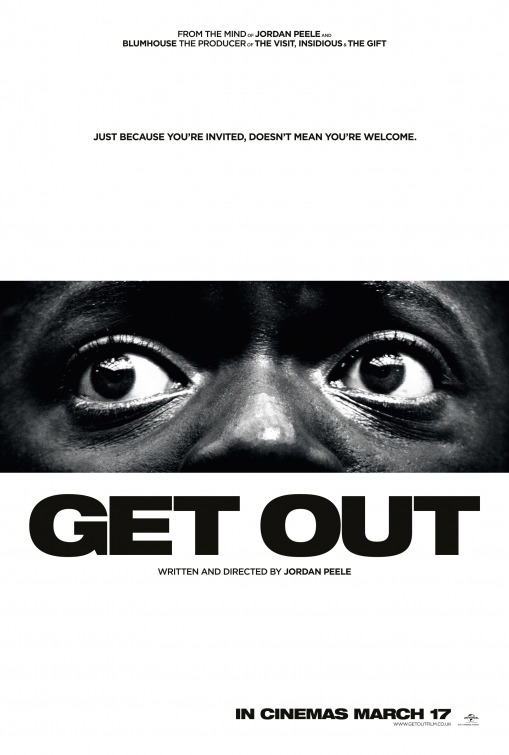