With his first two films, grisly cannibal Western Bone Tomahawk and ultra-violent prison thriller Brawl in Cell Block 99, S. Craig Zahler set out his stall as a purveyor of gritty, 1970s-style exploitation cinema. With chewy dialogue and grimly effective violence, Zahler’s brand of nihilistic, bleakly funny storytelling is both distinctive and divisive in equal measure. His latest effort, crime thriller Dragged Across Concrete, is a typically provocative piece of work, starting from the casting of Mel Gibson and continuing on through a story rife with racial tensions.

Zahler’s script tells the parallel stories of a pair of cops, Brett Ridgeman (Gibson) and Anthony Lurasetti (Vince Vaughn), and a freshly released ex-con named Henry Johns (Tory Kittles). He’s desperate to find the money to get his mother and younger brother out of poverty, finding a gig as a getaway driver on a routine bank heist. With financial woes of their own and an impending suspension from the force for roughing up a suspect, Ridgeman and Lurasetti hatch a plot to intercept the heist and snatch the spoils for themselves. Unfortunately for all involved, the criminals running the show are far more organised, ruthless, and heavily armed than anyone anticipated.

Clocking in at a whopping 158 minutes, Dragged Across Concrete is another slow-burner from Zahler that allows scenes to play out far longer than most filmmakers would ever dare, brazenly treading the line between mesmerising and maddening. Some scenes are oddly gripping, particularly those involving Ridgeman and Lurasetti, with Gibson and Vaughn working surprisingly well as an offbeat buddy cop pairing. Spending an eternity on a stakeout scene in which Lurasetti demolishes an entire egg salad sandwich – much to Ridgeman’s disgust – might be the final straw for some. Maybe taking a large chunk out of the middle of the film to introduce a bank teller (Jennifer Carpenter), returning to work from maternity leave, before sending her off to meet an incredibly obvious fate will seem pointless to many, downright cruel to others. But if you can relax into the film’s deliberate pacing, this is an engrossing crime thriller that all builds to an intense and intricately constructed finale.

In casting Gibson in the lead role, Zahler was no doubt aware that he’d be courting controversy, especially casting him as this character. Ridgeman is a character who abuses minorities on the job and harbours some troubling opinions when it comes to race; you almost get the feeling Zahler is toying with the audience. Depiction isn’t necessarily endorsement of course, but with characters ranting about the media and bemoaning PC culture, Zahler’s thoughts on the matter seem to be pretty clear.

Regardless, however, of the controversy surrounding Gibson’s casting, he takes to Zahler’s style with aplomb, delivering his most compelling performance in decades. He nails the glum, deadpan delivery of Zahler’s hard-boiled dialogue, and reminds you just how magnetic he can be on screen. Though Zahler’s style at times frustrates, it’s difficult to imagine any other filmmaker of his generation making a film like Dragged Across Concrete; this is a challenging, muscular and deeply engrossing film from a unique voice in cinema. 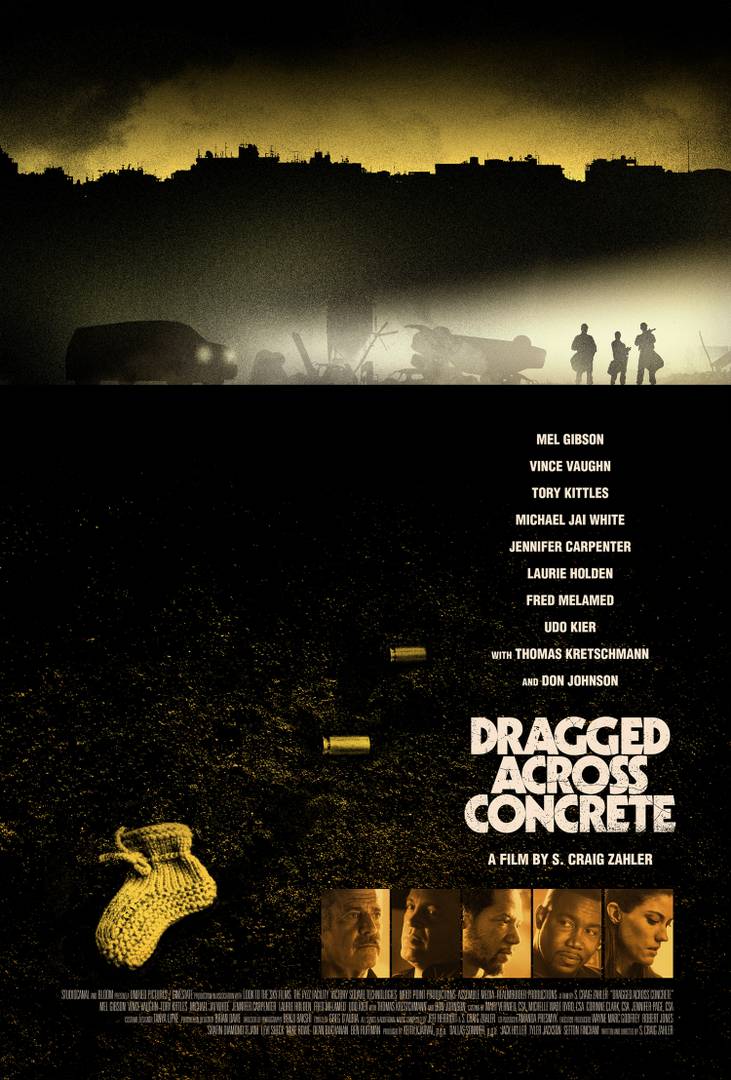